Austria: Farmer liable for hiker trampled to death by cow

Farmers warn that the verdict could set a dangerous precedent that could threaten Austria's vital tourism industry. Many of the country's hiking trails cross paths with cow pastures. 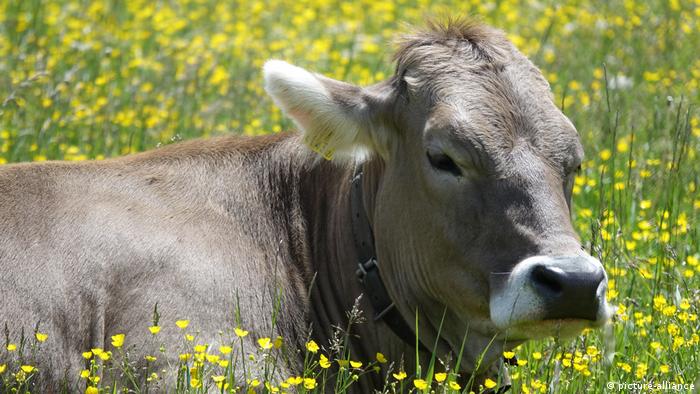 A court in Austria on Friday ruled that a farmer had to pay damages to the family of a German woman killed by one of his cows while hiking. The country's farming lobby and tourism industry voiced concern that the ruling set a dangerous precedent in a country where highly popular hiking trails often run through farms.

The court in Innsbruck, the capital of the Alpine province of Tyrol, ordered the farmer to pay €180,000 ($204,000 dollars) restitution to the woman's husband and son, as well as sending them monthly payments of over €1,500.

The victim was killed in 2014, when the cow herd became irritated by her dog and rushed at them both.

"As a pet owner, the victim should have known that mother cows are aggressive and dogs can react to that," read a statement from the court, adding however that the dog was leashed and "the probability of such an immediate attack…was very low."

The verdict will likely be appealed in a higher court.

"Hiking paths through meadows and mountain pastures would have to be closed for hikers," if the verdict is upheld, the Austrian Chamber of Famers said.

The group's president, Georg Strasser, said that it should be "common sense" not to bring dogs through hiking trails that contain pastures for other animals.

Tourism is an integral part of Austria's economy. Despite its size, it is often ranked in the top 10 or 20 destinations for international tourists by the UN's World Tourism Organization. Its scenic mountain hiking trails are a big draw for tourists.

Tens of thousands of tons of rocks have buried a Tyrolian village's only road. Three people have also died in Switzerland following a series of separate avalanches in the Alps. (25.12.2017)

Five skiers from the Czech Republic were killed when an avalanche engulfed dozens of people in the Austrian Alps. The snowslide was one of several in which skiers had to be rescued. (06.02.2016)

A Slower Pace: Snowshoeing in Tyrol

Snow doesn’t just draw skiers to the Tyrolean mountains, but increasing numbers of snowshoers. They strike out on untouched terrain, blazing their own trails. It’s an alternative to many other winter sports. (19.01.2017)