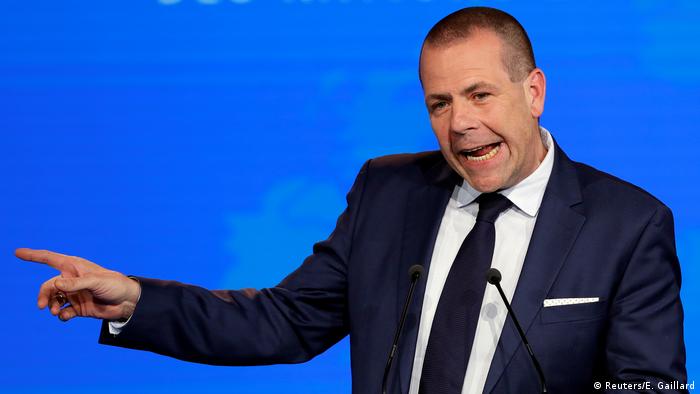 Opposition lawmakers in Austria were outraged on Wednesday by the appearance of Harald Vilimsky, general secretary of the far-right Freedom Party of Austria (FPÖ), on public broadcaster Österreicher Rundfunk (ORF) where he threatened the moderator.

Vilimsky, an FPÖ candidate for the European Parliament, said during an interview on Tuesday with ORF moderator Armin Wolf that he could face "consequences" after Wolf questioned the far-right politician about a cartoon poster of the FPÖ youth wing in the southwestern state of Styria.

In the interview on ORF channel ZiB2, Wolf first questioned Vilimsky over the "rat poem" by the deputy mayor of Braunau am Inn, Adolf Hitler's home town, which Austrian Prime Minister Sebastian Kurz deemed "racist." The mayor has since resigned over the poem.

Wolf then showed a cartoon flyer of the FPÖ youth league in Styria, which depicted a blonde couple in a traditional costume surrounded by sneering gray figures with oversized noses accompanied by the slogan "tradition beats migration." Wolf then asked Vilimsky how this depiction of migrants differed from the anti-Semitic depiction of Jews in the Nazi paper Der Stürmer (The Striker).

Vilimsky took exception to the comparison. "To draw this parallel, Mr. Wolf, is the last straw. Taking a picture of Der Stürmer, juxtaposing it with a youth poster and to suggest a link to national socialism — that is something that cannot go without consequences."

The ORF editorial board understood the FPÖ general secretary's statement as a "personal threat to ZiB2 presenter Armin Wolf."

"The ORF editorial board strongly condemns this attempt of personal intimidation," ORF said, adding that a political leader had never before made such a threat to a moderator.

However, Norbert Steger, a former FPÖ vice-chancellor and the current chairman of the ORF foundation board, described the comparison of the cartoon flyer and Der Stürmer as outrageous, saying it is "perverse that one always compares such lukewarm fans with Nazis." He also suggested that Wolf should run for the Social Democrats.

The FPÖ, a junior partner in Austria's coalition government, has feuded with ORF in the past, accusing the public broadcaster of left-wing bias.

The far-right party has long sought to do away with the licensing fee that funds the broadcaster. Last year, Steger threatened to dismiss one-third of ORF's foreign correspondents over displeasure with the broadcaster's reporting.

The row was listed as a reason why Austria fell five spots to 16th in the Reporters Without Borders' Global Press Freedom Index.

The suspected Christchurch Mosque shooter reportedly sent funds to a far-right French group before sending a "donation" to Austria. The Austrian far right have recently come under scrutiny for their links to the shooter. (04.04.2019)