The government must commit resources to fight the most pressing "danger" of climate change, former defense officials said in an open letter. "Australia has failed when it comes to climate threats," the letter read. Climate change represents the "greatest threat to the future and security" of Australia, former defense and security officials wrote in an open letter to the Australian government on Wednesday.

In the letter, former defense officials said they have witnessed up-close the devastation from war and crisis but climate change was the greatest "danger" facing Australians.

Australia has 'failed' to protect its people

"The first duty of government is the safety and protection of the people, but Australia has failed when it comes to climate change threats," the letter read.

The officials called upon political leaders to commit resources and make climate change a "primary focus."

"Climate must be made an immediate security priority, at the top of the national agenda, with a commitment for mobilization and emergency action from all sides of politics," officials said in the letter.

The Australian federal election is due sometime before May this year.

Morrison under fire over inaction on climate

Thousands of homes were destroyed.

Australians slammed the federal and state government's response to the flooding, with protesters demanding action when, on March 9, Prime Minister Scott Morrison visited Lismore, a town in northern New South Wales that bore the brunt of a two-week deluge. 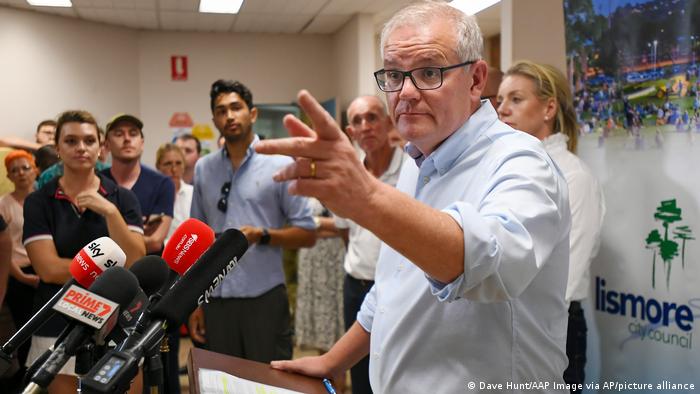 People held up placards that read "Coal and gas did this," and "This is what climate change looks like."

"Australia is becoming a harder country to live in because of these natural disasters," Morrison told people during his visit to Lismore two weeks ago.

Australia, one of the world's leading fossil fuel exporters, committed to net-zero emissions by 2050 at the United Nations climate conference in Scotland last year, which meant cutting greenhouse gas as close to zero as possible.

Morrison said he would not legislate the climate goal, but would rely on consumers and companies to bring emissions under control.

Australia, one of the countries most vulnerable to climate change, has faced repeated onslaughts of droughts, bush fires, warmer seas, destruction of corals and floods, as global weather patterns change.

AFP material contributed to this report.

Cars and homes in Sydney were impacted by flash flooding. Hailstones of a similar size to chicken eggs bombarded the city, causing severe damage to parked cars and roofs.