The bill would give asylum seekers in Nauru and Papua New Guinea better access to hospitals on mainland Australia. It is the first time in almost a century that a ruling party has lost a major legislative vote. 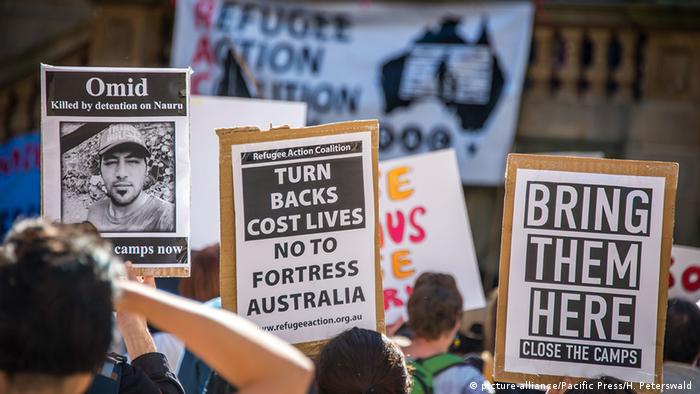 Australia's ruling conservative party suffered a rare defeat on Tuesday, when the opposition joined minor parties and independent lawmakers to pass a bill that would give sick asylum seekers easier access to mainland hospitals.

Under Australia's harsh asylum policy — aimed at deterring asylum-seekers from reaching Australia by boat — Canberra sends asylum seekers who arrive by sea to Nauru and Papua New Guinea for processing and bars them from resettling in Australia.

The bill passed on Tuesday would allow doctors instead of bureaucrats to decide which asylum seekers in the camps can fly to Australia for medical treatment.

The bill must be approved by the upper house to become law, but it is expected to pass, as the Senate supported an earlier version of the bill last year.

Prime Minister Scott Morrison's conservative government argued that the bill, which passed 75 to 74 in the House of Representatives, will undermine Australia's tough refugee policy.

Morrison's administration is the first in nearly a century to lose a vote on major legislation, fuelling calls for a snap election.

His coalition has to call an election by May and has been trailing the opposition center-left Labor Party in opinion polls.

A sitting government last lost a vote on substantive legislation in 1929. Then-Prime Minister Stanley Bruce immediately called an election, which he lost.

The government of Prime Minister Arthur Fadden lost a symbolic budget vote in 1941 and immediately resigned.

"Votes will come and they will go, they do not trouble me," Morrison told a news conference in the capital Canberra following the vote.

"Where we will always stand, and the Australian people can always trust us to do, is to have the mettle to ensure the integrity of our border protection framework ... the Labor Party demonstrated tonight they have no such mettle," Morrison said.

Labor representatives said it was about "doing the right thing," and the vote provoked cheers from asylum-seeker activists in parliament's public gallery.

Behrouz Boochani, a Kurdish Iranian journalist detained in an Australian-run camp in Papua New Guinea, tweeted that it was "great to see the Australian parliament finally vote for humanity."

Boochani recently won the Victorian prize for literature for his book "No Friend But the Mountains," which he wrote largely via messages to interpreter Moones Mansoubi using services such as WhatsApp.

"Many people are happy now because they will finally receive medical treatment," Boochani tweeted.