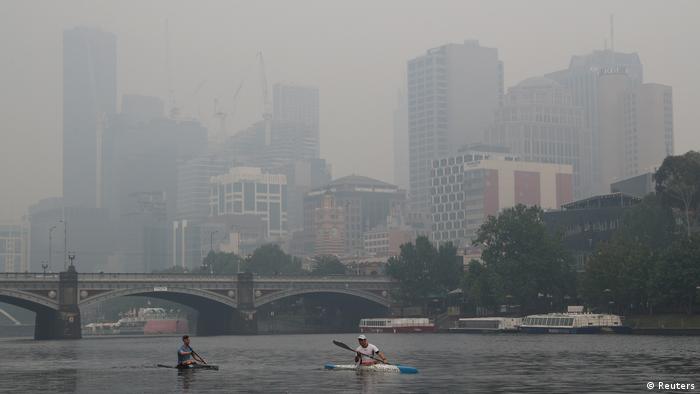 Polluted air caused by the bushfires raging across the country meant practice sessions were halted on Tuesday ahead of next week's Australian Open, the first Grand Slam in the tennis calendar.

Germany's Alexander Zverev was due up first on the Melbourne practice courts, followed by Spanish world No. 1 Rafael Nadal.

"Practice was temporarily suspended this morning due to poor air quality. Conditions onsite are improving and are being constantly monitored."

Later on Tuesday, qualifying was delayed because of the poor air quality. Tournament organizers said in a statement: "Further decisions will be made based on onsite data, and in close consultation with our medical team, the Bureau of Meteorology and scientists from EPA Victoria."

Will the fires affect the Australian Open?

Tuesday's interruption will cast further doubt over the two-week long tournament that is set to begin in earnest on January 20.

Melbourne's air quality reached a score of 213 on Monday, whereby 200 is considered "very unhealthy," but Australian Open officials said they "don't expect any delays" to the start of the tournament. They claim they have introduced "additional measures" to ensure the safety of the players.

Stars such as Roger Federer, Serena Williams and Nadal will feature in a bushfire fundraising event at Melbourne Park on Wednesday.

At least 28 people have died in the bushfires, which have also destroyed hundreds of homes and devastated wildlife.

Novak Djokovic beat Rafael Nadal in their singles rubber before returning to court less than an hour later to win his doubles match and lead Serbia to victory. The European country become the first to lift the ATP Cup. (12.01.2020)