Tennis world No. 7 Alexander Zverev took down top-ranked Rafael Nadal at the ATP Finals in London, winning in straight sets against his Spanish opponent. The defending champion saw off an off-color Nadal 6-2 6-4. 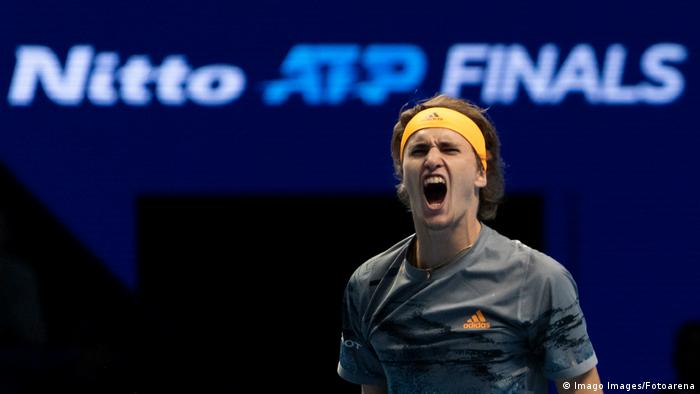 Alexander Zverev beat world No. 1 Rafael Nadal at the ATP Finals opener on Monday, getting the defense of his title off to the perfect start.

The German, who has endured a difficult year, including splits from both his coach and agent, was in top form against a lackluster Nadal, defeating the Spaniard 6-2 6-4.

Read more: Zverev looking to put a difficult year behind him

Nadal, who has traditionally struggled at the annual event in London, was possibly feeling the aftereffects of a troublesome hand injury he first picked up at the Laver Cup in September, that then flared up once more in Shanghai last month.

Nevertheless, the match seemed evenly balanced at two games all in the first set before Zverev won six games in a row. He then took an early lead in the second set, from which Nadal wasn't able to recover.

Read more: Angelique Kerber: Is this the beginning of the end?

Given the round-robin nature of this event, all is not lost for the Mallorca-born player, who will play Russia's Daniil Medvedev on Wednesday in a must-win match for both players.

Zverev, meanwhile, will be feeling confident after defeating Nadal for the first time in his career. The seventh seed will face Greece's Stefanos Tsitsipas in the evening match on Wednesday.

Rafael Nadal survived a rousing comeback from Daniil Medvedev to win the US Open in five sets on Sunday. The title is the 19th Grand Slam win of the Spaniard's career, just one shy of Roger Federer's haul. (09.09.2019)

Spain's Rafael Nadal has won the French Open for the 12th time, beating his Austrian opponent Dominic Thiem over four sets. Thiem had drawn level, winning the second set before Nadal stormed back to win the title. (09.06.2019)