Angelique Kerber: Is this the beginning of the end? | Sports| German football and major international sports news | DW | 27.08.2019

Angelique Kerber: Is this the beginning of the end?

Angelique Kerber's first round US Open exit marks the end of a dreadful Grand Slam year for the 2018 Wimbledon winner. The German has only been past the second round once in 2019, but is her decline terminal? 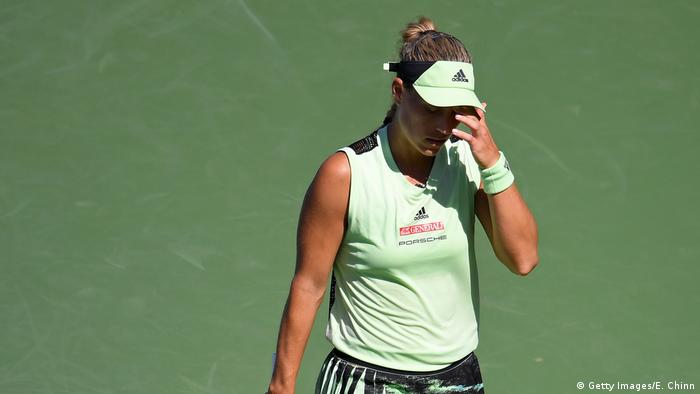 "This year it was not really the best year for Grand Slams for me," said Angelique Kerber after Monday's defeat by unseeded French player Kristina Mladenovic at Flushing Meadows.

It was something of an understatement from a player who won Wimbledon last year and also reached a quarter and semifinal in the French and Australian Opens respectively in 2018.

That Germany's best female player since Steffi Graf should lose to a player ranked outside the top 50 is less of a surprise than it should be. She also fell at the first hurdle in this year's French Open, on a surface she's not suited to, and in the second round at Wimbledon. Her best performance in a major in 2019 was in Melbourne, where she reached the fourth round before falling to Danielle Collins, an American whose highest career rank is 108.

"Of course I am disappointed. I lacked matches and confidence," Kerber continued.

Confidence has often been a problem for the 31-year-old left-hander. After a spectacular breakout year in 2016, when she won her first two slams (Australian Open, US Open), picked up an Olympic silver and reached world number one, Kerber endured a difficult 2017, with the fourth round again the best she could manage.

Her response two years ago was to part company with her long-serving coach Torben Beltz and join forces with former Belgian pro Wim Fissette, who counts Kim Clijsters, Simona Halep, Victoria Azarenka and Petra Kvitova among his former charges.

That relationship seemed to be bearing fruit, with the Wimbledon win the highlight of a strong year. But in October, Kerber announced that she had split with Fissette and would compete in the WTA Finals without a coach. By November, she'd hired compatriot Rainer Schüttler, but he was dismissed last month and Kerber is once again going it alone, an unusual state for top players.

"I cannot understand that she played here without a coach. All top 10 players have a coach at their side," said German tennis grandee Boris Becker on commentary duties for Eurosport on Monday. The head of German women's tennis went further: "She wouldn't have lost the match with a coach," Barbara Rittner insisted.

But in a nod to the stubborn and relentless baseline rallyer she is at her best, Kerber would not be bowed.  "I won't be pressured by anyone. The key to defeat was not that I have no coach," she said, before adding that "I don't know yet" when asked whether she will get a new coach. 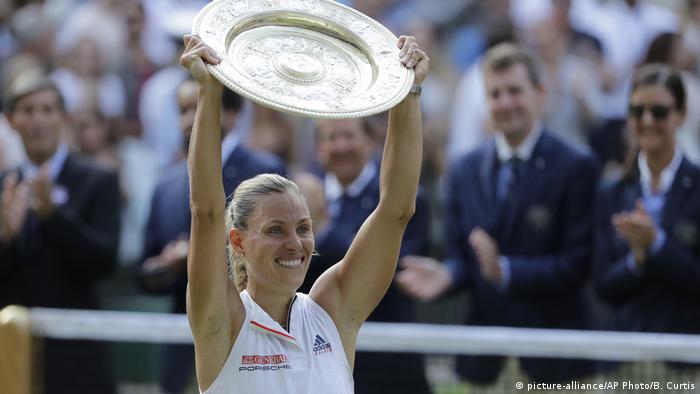 Kerber's success has been built on making the most of her talent. She's far from the fastest server in the women's game, isn't overly comfortable at the net and will often hit less winners than her opponent but, crucially, will usually make significantly fewer unforced errors. Even in Monday's defeat, Kerber made 24 unforced errors to Mladenovic's 43.

A relatively defensive style, combined with her speed across the surface, is designed to grind down opponents but those qualities can mean she has little in the way of a plan B when she is being overpowered. She often relies on the woman on the other side of the net to lose matches rather than winning them herself.

Kerber has been here before and recovered and, as a player whose career has been a triumph of self-belief, few would be willing to write her off entirely. But the Bremen-born athlete will have just turned 32 by the time the next grand slam, the Australian Open, starts on January 20.

In decades gone by, such an age would have meant a severe diminishing of Kerber's chances to add to her three slam victories; only Martina Navratilova (34) and Serena Williams (36) have won women's majors over the age of 32 in the open era.

But, as well as in the ageless and tireless Williams, Kerber can find hope in the men's game. Novak Djokovic (32), Roger Federer (38) and Rafael Nadal (33) remain utterly dominant having won the last 11 slams between them. There is not a single male player currently below 30 who has won a grand slam.

While the talent and application of those four makes them anomalies in many ways, improved diet, medical knowledge, selective participation in tournaments and training methods are prolonging professional careers, though some would argue only if they are implemented bý coaches.

With five months before the next slam, and her falling ranking making an apperance at the season-ending WTA Finals unlikely, Kerber may take some time to rest body and mind and decide whether a new coach might be neccessary in order for her to bounce back in 2020 as she did in 2018.

After a summer that started with sporting disappointment, Angelique Kerber gave Germany's sports fans reason to cheer. DW's Jonathan Harding argues Kerber's win was also a reminder of the greatness of other sports. (14.07.2018)

Angelique Kerber has parted ways with coach Wim Fisset less than a week before the WTA Finals in Singapore. Fissette helped Kerber, currently ranked third in the world, return to the pinnacle of women's tennis. (16.10.2018)

Germany's best female tennis player is struggling to realize her career Grand Slam dream. Another first round exit is problematic, but may also provide the answer Kerber needs to return to her best tennis. (26.05.2019)