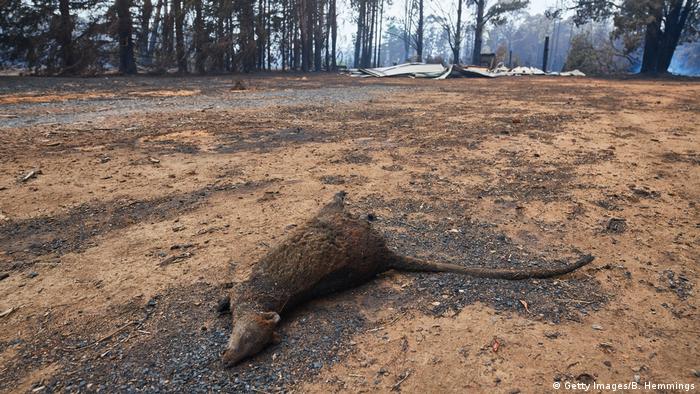 Australian insurers put their four-month bill for bushfire losses logged so far at around 700 million Australian dollars (US$480 million or €430 million) on Tuesday, with at least 1,588 homes destroyed, 25 people killed, and likely livestock losses, sheep in large part, of around 100,000.

Ecologists also feared that at least half a billion mammals, birds and reptiles had perished merely in New South Wales (NSW), the eastern state with Sydney as its capital. The Australia Bureau of Meteorology also played down hopes of potential relief from monsoon rains still well distant from worst-affected southeastern Australia.

On social media channels, climate deniers were challenged by the New York-based media outlet Buzzfeed, which identified and then debunked a series of inaccurate claims, dubbing them "bull****."

One January 1 entry on Twitter with an anonymous author alleged that "climate activists" had lit fires, incited by "Greens politicians" to heighten public fears about climate change.

More than 180 "firebugs" had been arrested in recent months in NSW and adjoining states of Queensland, Victoria and South Australia as well as Tasmania, reported The Australian Tuesday. But Melbourne University associate professor Janet Stanley cast doubt on the arsonists being political animals, saying they were typically young males, aged 12 to 24, or older men in their 60s. Queensland police cited by the newspaper said 69 juveniles were among those they had arrested in recent weeks.

"Often there is not an intention to cause chaos… many arsonists don't plan on causing the catastrophe that occurs," added Stanley.

Buzzfeed also alluded to "untrue claims" circulating on Facebook claiming that "greenie" objections to "back burning" of combustible forest litter during safer months had added to the drama.

Land that had been backburned "quite hard — quite heavy fuel reduction burning only three or four years ago — had burnt pretty hot last weekend," Warrington said, adding that a bushfire across one treated landscape had not even been slowed.

"We've had fire down the landscape here that has had burns go right through it [during colder months] and it hasn't slowed it at all," he added.

"The numbers don't lie, and the science is clear," Mullins told the Sydney Morning Herald. "Fires are burning in places and at intensities never before experienced."

"Blaming 'greenies' for stopping these important measures is a familiar, populist, but basically untrue claim," said Mullins, adding that he and other retired chiefs had warned "how climate change is supercharging our natural disaster risks."

"I wish we were wrong, but we're not," Mullins surmised.

NSW police, meanwhile, on Tuesday, sought to warn off potential looters in townships where residents had been evacuated as a fresh "megablaze" was forecast for adjoining areas of NSW and Victoria.

"It really goes against the grain of the Australian people and spirit," NSW deputy police commissioner Gary Worboys said in Sydney amid reports that three persons had been charged over offenses in the fire-impacted South Coast region.

Australia's ACCC consumer commission said it was dealing with "numerous" reports of scammers seeking fake relief donations via telephone calls and messages. "Perhaps the most egregious way is people impersonating relatives of people who have died, perhaps on a Facebook page, saying join me and fund me, when it is fake," the ACCC's Rod Simms said.

Such scams could be penalized with fines of more than a million Australian dollars, the ACCC warned.

Bushfire risk 'will continue to increase due to climate change'

Mullins: 'This is not normal'