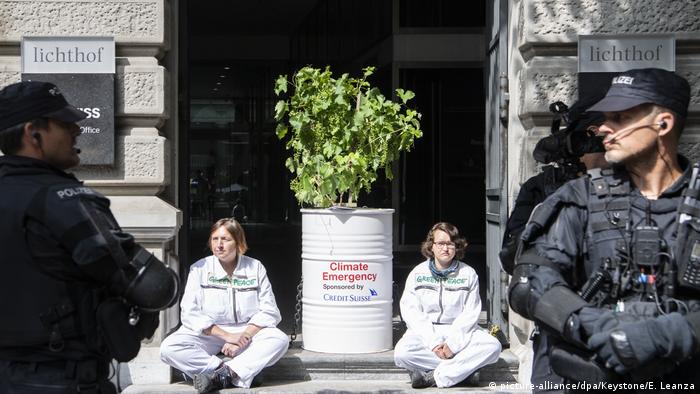 A Swiss court has ruled in favor of a dozen young climate activists who occupied a Credit Suisse branch and played tennis in a protest against fossil fuel investments.

In his ruling on Monday, Judge Philippe Colelough said due to the imminent danger of the climate crisis, the mainly student protesters, who wore complete tennis outfits as part of their demonstration, were not guilty of refusing to pay fines linked to charges like protesting without a permit and resisting police.

Wearing white sports clothes and wigs, the protesters staged the match at a Lausanne branch of the Swiss bank in November 2018 to underscore their demands and urge tennis star Roger Federer to end his sponsorship arrangement with the financial institution.

The activists were charged with trespassing and fined 21,600 Swiss francs ($22,200) at the time, but in their appeal hearing, Judge Colelough said they had acted proportionately and waived the financial penalty, which will now be paid by the state.

The activists had argued they were in the Credit Suisse branch because of the "imminent danger" the planet is facing — a stance the judge agreed with.

"Because of the insufficient measures taken to date in Switzerland, whether they be economic or political, the average warming will not diminish nor even stabilize, it will increase," he said, pointing to the country's melting glaciers.

"In view of this, the tribunal considers that the imminence of danger is established," the judge continued. "The act for which they were incriminated was a necessary and proportional means to achieve the goal they sought."

The courtroom reacted with cheers and a standing ovation. "I didn't think it was possible," one of the accused, Beate Thalmann, told the Reuters news agency. "If Switzerland did this, then maybe we have a chance."

Credit Suisse responded to the ruling via a statement that said the bank "takes note of the verdict and will analyze it."

The bank had previously argued it could not accept "unlawful attacks" on its branches, while acknowledging "freedom of expression as a fundamental democratic right."

Regarding its environmental policies, the bank added it would take a different approach, saying "in the context of its global climate strategy that it will no longer invest in new coal-fired power plants."

Roger Federer, meanwhile, reacted to criticism of his association with Credit Suisse by releasing a statement over the weekend saying he takes climate change "very seriously."

The Swiss tennis star, who came under fire from teen activist Greta Thunberg among others, said: "I appreciate reminders of my responsibility as a private individual, as an athlete and as an entrepreneur, and I'm committed to using this privileged position to dialogue on important issues with my sponsors."

A spokeswoman said Monday that talks with Credit Suisse were already underway on its climate change impact, without elaborating further on what those discussions involved.

Federer, who is in Melbourne ahead of the Australian Open, also promised to make a donation to the Australia bushfires appeal following the devastating blazes the country has suffered in recent weeks. The 38-year-old, who has won the Slam down under six times, is also set to take part in a charity event to raise funds for the appeal on Wednesday. He didn't stop there, though, as he will "be making a donation personally," Federer announced on Monday. "This country has given me everything and more in the past, so it's only normal for me to help as well."

The German engineering firm has reaffirmed plans to support the controversial Adani coal mine project. Siemens has come under fire for the project's climate implications, with bushfires currently raging across Australia. (13.01.2020)

Activists were carried away after blocking off the entrance to Credit Suisse, one of the biggest banks in Switzerland. The arrests come as student launched a five-day climate change protest in the German city of Cologne. (08.07.2019)