Australia to spend billions to counter China in Pacific islands

Canberra is ready to invest billions in Pacific nations with an infrastructure and diplomacy campaign to counter China's perceived influence. Australia also plans to redevelop a military base on Papua New Guinea. 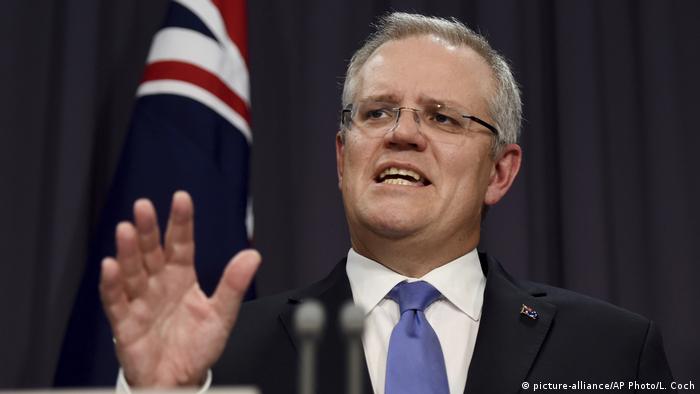 Australia will set up a 2 billion Australian dollar infrastructure bank for projects in the region and spend a further 1 billion promoting exports and supporting Australian businesses in the Pacific, Prime Minister Scott Morrison said Thursday.

Morrison said it was time to "open a new chapter in relations with our Pacific family" and put the island states at the "front and center of Australia's strategic outlook, foreign policy."

Australia's aid dollars would be "stretched further" as infrastructural grants and loans in telecommunications, energy, transport [and] water, Morrison added.

The media chorus coincided with a visit to Beijing by Australian Foreign Minister Marise Payne. She met her Chinese counterpart Wang Yi, who on a visit to Papua New Guinea last month said China would "never" interfere in local matters.

China has taken offense at new Australian law passed over claims of Chinese meddling in Australian politics, amid caution in Australia over Chinese stakes in telecoms and research projects and China's growing western Pacific naval presence.

Naval base at Manus

The United States is already expanding its Marine Corps training hub at Darwin inshore of Australia's vast northern maritime borders with neighboring Indonesia and PNG as part of a strategic US pivot for Asia.

Australia's Defence Force would set up a permanent training team for the Pacific and increase deployments. Extra diplomatic missions would be opened in French Polynesia, the Marshall Islands, Palau, Niue and the Cook Islands.

He would declare Australia's "abiding interest in a Southwest Pacific that is secure strategically, stable economically and sovereign politically," ABC News reported.

Australia's focus would be shifted to its "diplomatic backyard," said The West Australian newspaper, based in Perth on the continent's Indian Ocean rim.

China would not be explicitly mentioned by Morrison, but the "reorientation would go some way to countering the [Chinese] largesse flowing into tiny nations such as Fiji, Tonga, Vanuatu and the Solomon Islands from Beijing," said the West Australian.

In May, Australia said it would spend about A$200 million to develop an undersea internet cable to Papua New Guinea (PNG) and the Solomon Islands as an alternative to an offer from China's Huawei telecommunications giant.

Australia plans to double its annual defense spending in the next decade. Prime Minister Malcolm Turnbull says the US will remain Canberra's partner, adding that China's rise poses "high stakes" in Asia and the Pacific. (25.02.2016)