The baby at the centre of a Thai surrogacy scandal has been granted Australian citizenship. Gammy, born with Down's syndrome was abandoned by a Perth couple who took home his twin sister. 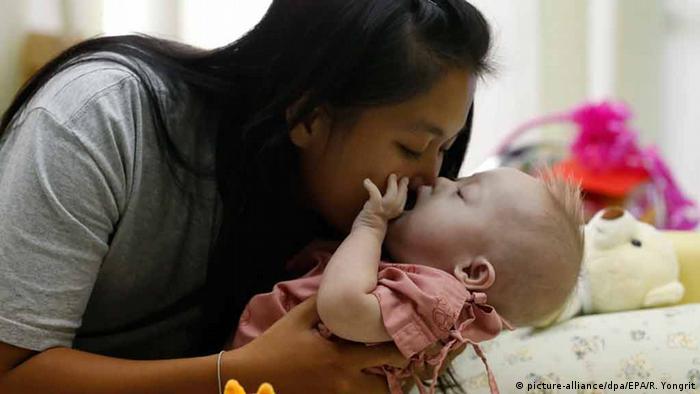 An Australian couple's decision to abandon one of its surrogate twins because of poor health sparked international outcry and a global debate about the legal and moral issues surrounding surrogacy last August.

A Thai woman, Pattaramon Chanbua, gave birth to twins for an Australian couple in December 2013. However, after discovering that the male twin, named Gammy, had Down's Syndrome and a life-threatening heart condition, the couple gave him back to the mother and kept his sister Pipah.

The couple denied abandoning the boy, saying they had wanted to bring him home and left Thailand fearing the surrogate mother would seize their daughter.

"The department can confirm that an application for baby Gammy's Australian citizenship by descent has been assessed and found to have met all criteria for the grant," an immigration department spokeswoman said in a statement on Tuesday.

Pattaramon Chanbua, who is in her early 20s, told AFP news agency that she had no immediate plans to take her son to Australia but had applied for citizenship with the help of the Australian charity Hands Across the Water as a safeguard for his future.

"I want him to be near me here [in Thailand] so that I don't have to miss him," 21-year-old Chanbua said.

"But if all of my family, including me, dies and if Gammy is left behind alone, at least the Australian government will help him."

She added that Gammy is in good health and turned one in December.

According to the Australian Broadcasting Corporation (ABC), Gammy has also moved into a new home in Chonburi province, about 90 kilometers south-east of Bangkok, using money donated by well-wishers from across the globe and funds raised by crowd funding.

Gammy's biological father, David Farnell, a convicted sex offender, is currently under investigation by the authorities in Western Australia regarding the wellbeing and safety of Gammy's twin sister.

Commercial surrogacy remains illegal in Australia, resulting in growing numbers of infertile couples heading overseas to countries such as India and Thailand to fulfill their dreams of having a family.