At AIPAC, hardly a mention of a future Palestinian state | Americas | North and South American news impacting on Europe | DW | 27.03.2017 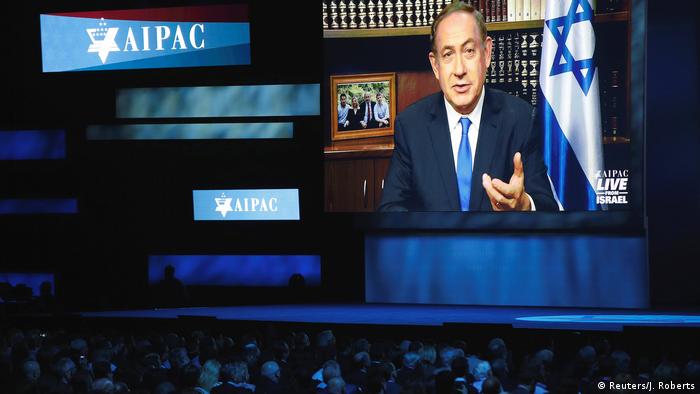 Putting an exact time and date of death on the two-state solution has been difficult. It is telling that US President Donald Trump was able to undo decades of US foreign policy efforts at his press conference alongside Israeli Prime Minister Benjamin Netanyahu with a casual "I like the one both parties like" line.

It is even more telling that hardly any of the main speakers at of the American Israel Public Affairs Committee's (AIPAC) annual Policy Conference devoted even lip service to the idea of a Palestinian state. Even Netanyahu's address, the highlight of this year's session, did not contain the usual phrase "two states for two peoples, living side-by-side in peace and security." This sentence could be found in almost every Netanyahu address on the subject up until now.

Instead, AIPAC this year was devoted to the dangers of a nuclear Iran, the rise of worldwide militant Islam and fighting the Boycott, Divest, and Sanctions (BDS) movement that has become popular on US college campuses. These subjects have a broader swath of consensus among conference attendees.

Of the more than 70 breakout sessions offered to conference participants and open to the press, only five mentioned the Palestinians, and just one dealt directly with hypothetical future peace deals with the Palestinians.

The fact that the peace process has fallen out of vogue may be that there simply hasn't been much movement one way or another for several years, said Harold Waller, a professor of political science at McGill University. All parties are showing a stubborn unwillingness to acknowledge each other. 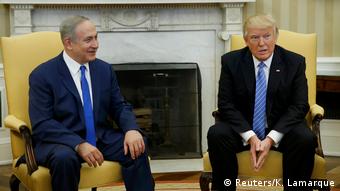 Trump met with Netanyahu in February

"There's not much happening right now with regard to the peace process," Waller told DW. "Things are still fairly hostile."

One can't really blame the change in US administrations either, Waller said. "Under Obama, the US wasn't very effective. In fact, it may have been counter-productive, because it was clear that in order for Israel to feel comfortable with an agreement, it had to feel comfortable that it was getting backing from the US," Waller said. "That backing was not apparent under the Obama administration."

Given the chummy overtures Trump and Netanyahu broadcast together at their joint press conference, Israel may feel much more comfortable. But the Palestinians are unlikely to trust Trump, Waller contended. "They're at a stalemate," he said.

Dov Waxman, the Stotsky Professor of Jewish Historical and Cultural Studies at Northeastern University, didn't think the situation was quite that dire. "There is some movement," Waxman said. "There is some discussion about possibly bringing in more regional actors into the peace process." 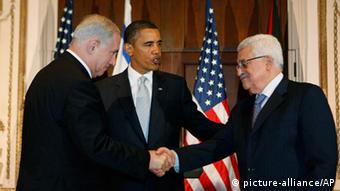 Those regional actors would include Egypt, Saudi Arabia, and the Gulf states, all of which have ongoing behind-the-scenes relationships with Israel, but openly preach both anti-Israel and anti-Semitic propaganda, and thus have little to gain by suddenly making nice publicly with the Jewish state.

"That's about as encouraging as I can be," Waxman said with a laugh. And while the Trump administration may want to sincerely broker a deal, even if they could get the Palestinians on board, there was little in the way of apparent details or action plans coming from Washington.

"They don't have a fleshed-out strategy, other than making it a regional process," Waxman said. "And they will quickly run into the same obstacles Obama, and every US president before him stretching back to 1967 or even 1948, encountered."

The idea of another party coming to broker a deal looks, at this moment, unlikely. The international community holds little credibility in the Israeli view.

"The Americans are the only party of credibility with Israel," said Waller. "I don't know how high of a priority [the peace process] will be for President Trump."

A bleak prediction for peace between Israel and Palestine

Leaders have met in Paris to discuss peace between Israel and Palestine, but decades of mistrust and the changing US presidency spell trouble in the coming days. Mideast expert Harel Chorev talks to DW. (15.01.2017)