Donald Trump made headlines this week when he publicly distanced himself from the two-state solution in the Middle East conflict. But he was simply bidding farewell to an illusion, says Alexander Kudascheff. 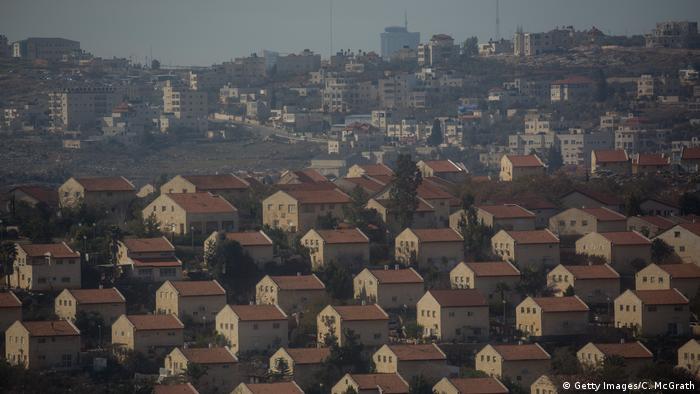 A two-state solution to the Israeli-Palestinian conflict in the Middle East has become part of the standard repertoire of international diplomacy. It is repeatedly invoked – at the UN and at Middle East conferences, as well as at EU, G7 and G20 summits. Those engaged with the still-unresolved Palestinian situation emphatically call for a Palestinian state to be erected alongside Israel. Most say that when that happens there will finally be peace in the region.

Arabs have painted themselves into a corner

The reality of this incessantly invoked vision is quite different: it became an illusion long ago. In 1967 to be exact – almost 50 years ago – when Israel occupied the West Bank, Gaza and the Sinai during the Six-Day War. After the war, the Arab League gathered in Khartoum, Sudan. The League's anger and powerlessness in the face of the "Israeli David" was voiced in a resounding triple no: No to Israel, no to negotiations, no to peace. With that, the Arab countries walled themselves in, and the rise of the PLO began to affect the balance of power – not lastly, due to its use of terrorism, such as the attacks it orchestrated at the 1972 Munich Olympics.

The only leader to free himself from the vicious cycle of refusal was Egyptian President Anwar Sadat. In 1979 he flew to Israel, spoke before the Knesset, negotiated with the Israeli war hawk Menachem Begin, and made peace with his former archenemy. It was a "cold peace," but one that has nevertheless continued to hold until today – and he was given back the Sinai in return. Sadat's principle: land for peace. That principle is also the basis of the two-state solution. Israel is to give back the occupied territories, and in return, its right to exist will be recognized by the Palestinians and the rest of the Arab world. Then a Palestinian state will be founded next to Israel, and there will be peace – at least in theory.

And in practice? There have been numerous attempts to find a diplomatic solution, whether it has been by the USA, EU or UN. Attempts have been made in the 1980s, the 1990s and in this new millennium; in Venice, Madrid and Oslo; whether by Jimmy Carter or Bill Clinton. Yet they have all failed. Sometimes this has been because of excessive Palestinian demands, sometimes because of Israeli inflexibility. And during the last fifty years Israel has also created facts on the ground by aggressively and expansively building illegal settlements throughout the Holy Land.

Peace impossible due to settlements

The result is that without Israeli settlements, an independent Palestinian state would, in theory, be conceivable. But it is no longer possible in practice. For Israel will not be willing to give up the majority of its settlements. Both Israeli and Palestinian hands are tied and the vicious circle is complete. Any diplomatic solution is only an illusion.

In which case it also doesn't really matter which side hindered peace in the past – whether it be Yasser Arafat or Ariel Sharon. The only leader to ever have taken a great first step was Anwar Sadat back in 1979, and it was likely the reason he was assassinated. In comparison, none of the leaders that came after him, on either side – with the possible exception of Israeli Prime Minister Yitzhak Rabin, who was similarly assassinated – have dared risk anything to attain peace. That is why, fifty years on, the vision of a two-state solution has devolved into nothing more than an illusion. However, this realization adds nothing to the question of how peace might be achieved between Israel and the Palestinians – indeed in the entire Middle East.

The Middle East conflict remains the single greatest challenge to international diplomacy. A challenge without any real solution.

France calls US position on Israel-Palestine peace 'confused and worrying'

Top diplomats from around the globe took measure of new US Secretary of State Tillerson on his first major international trip. Paris said it was worried by a US step back for a two-state solution in the Middle East. (16.02.2017)