German astronaut Alexander Gerst has left for his second mission in space. We got you covered with the astronauts' preparations and cool footage of the launch! 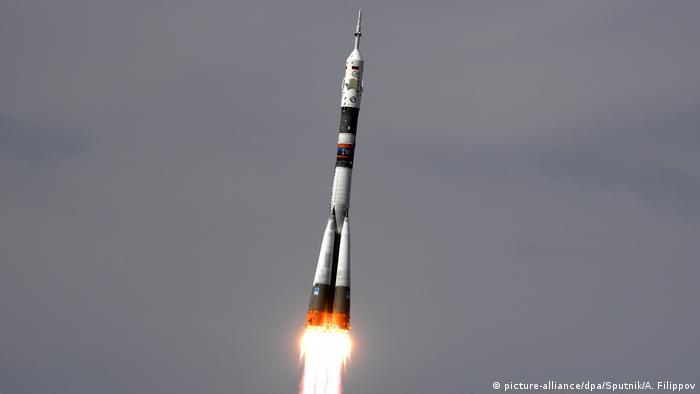 All times in Central European Summer Time (Baikonur is 4 hours ahead).

- The Soyuz rocket with Alexander Gerst launched at 1:12 pm without any trouble

- For part of the "Horizons" mission, Gerst will have command of the International Space Station (ISS). He'll be the first German commander ever

- This is the second time in space for Gerst. He spent roughly six months on the ISS in 2014

3:00 pm: Gerst had created a playlist with songs the crew listened to before the launch. Among the titles: the theme of the "Captain Future" cartoon.

Makes you dream of space, doesn't it?

With this we say goodbye. Remember, the Soyuz spacecraft is set to arrive at the ISS just after 3 pm CEST on Friday. And on Tuesday, June 12, we will cover a live Q and A session with Gerst from space. You don't want to miss this!

2:31 pm: Here's full video of the launch. Lay back, watch and have your mind blown.

2:16 pm: Wondering what exactly it is Gerst will have to do as head of the "Horizons" mission? We got you covered with our run-down of the tasks of an ISS commander.

2:04 pm: Our reporter Juri Rescheto is at the Baikonur spaceport in Kazakhstan and was able to film Gerst saying goodbye to his loved ones right before the astronauts left for the launch pad.

1:54 pm: The trio has safely made it into orbit and the spacecraft's solar arrays have successfully deployed. Arrival at the ISS is scheduled for Friday afternoon CEST.

1:13 pm: And they're off! The Soyuz spacecraft carrying Gerst, Prokopyev and Aunon-Chancellor is on its way to the ISS. Safe travels, gute Reise, счастли́вого пути́!

12:57 pm: Astro-Alex is ready for take-off and so are we! If things go as planned it's only 15 more minutes until the launch.

12:48 pm: Our reporters are at the main ESA event for the "Horizons" launch in Berlin. Follow DW Science on Twitter for the latest on the take-off (and other cool science content after today).

12:34 pm: You can now follow launch preparations on the ESA livestream. Less than an hour, folks!

12:22 pm: In keeping with tradition, the Soyuz spacecraft was blessed by an Orthodox priest the day before the launch. Since the 1970s, all crews leaving for the ISS have also watched the same movie ("The White Sun of the Desert," a Russian western) before taking off. And male astronauts urinate on the back right-hand tire of the bus taking them to the launch pad. This tradition originated when cosmonaut Yuri Gagarin relieved himself this way in 1961. 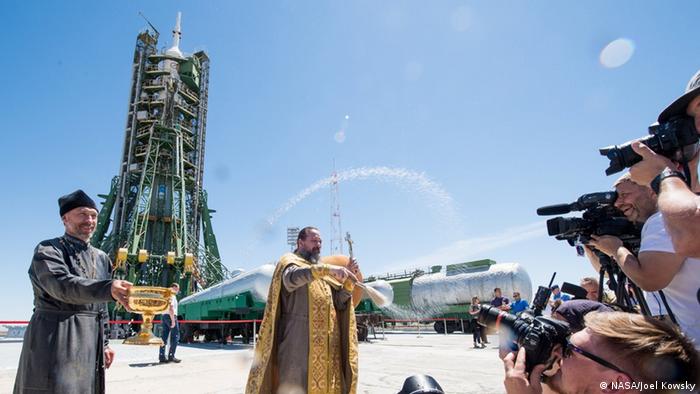 A blessing from above

11:47 am: The crew's journey to the ISS will take two days. The trip can be accomplished in just six hours, but for that, the space station has to be in a certain position. The ISS was recently moved to allow for a smooth landing back on Earth of a returning crew, so now Gerst and co will have to orbit the Earth a little bit longer.

11:23 am: Can't wait for take-off? Then check out this livestream from Baikonur. It has some footage from before Gerst and his colleagues entered the spacecraft as well — all in Russian, though.

The European Space Agency (ESA) livestream will start one hour before the launch, and of course you'll find the link here as well.

11:10 am: Last-minute preparations are in full swing, with the crew having entered the rocket. Astro-Alex tweeted up until the last minute.

11:00 am: Today's the day! In less than three hours, the Soyuz spacecraft carrying Alexander Gerst, cosmonaut Sergey Prokopyev and US astronaut Serena Aunon-Chancellor will launch from the spaceport in Baikonur, Kazakhstan. Gerst has been to the ISS once before, in 2014. Here are some of the breath-taking pictures he took during his first mission. Let's hope he sends some our way this time around, too!