Germany's first Space Station Commander Alexander Gerst told Deutsche Welle that to him, reaching out to young students and kids is the most important part of his "Horizons" mission. 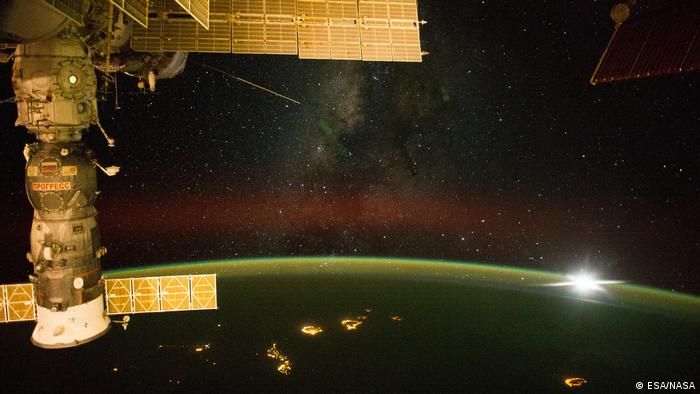 Deutsche Welle: What's so special about the Horizons mission?

Alexander Gerst: All space missions are special in that they allow us to see our home planet from a very different perspective. That's something that we cannot otherwise do.

We all know that sometimes taking a step back and looking at a problem or a thing with some distance can actually help us to understand it much better. We also can understand solutions much better. Then, when we do science onboard the International Space Station (ISS) that's not possible anywhere on Earth, even with all the money you could possibly find and with all the effort you could possibly put into it.

This fantastic laboratory in space allows us to do, for example, material sciences experiments. It helps us understand materials much better. Once we've understood them really well, we could produce such materials on Earth and, for example, build more fuel-saving turbines for airplanes and therefore improve life on Earth massively. That's a good reason to fly to space and therefore all space missions are very special.

You're also the first German commander of the ISS. How does it feel?

For me it is a great honor in a personal way. I call it my 'personal horizon' that I try to broaden here, because I'm learning how it is to take responsibility for a space vehicle and its crew.

More than that it's actually a compliment. Not for me but for the European Space Agency to be given that responsibility and trust by their international partners who built the ISS. That shows you how well-integrated the European space flight is.

There's really a continuity of European space flight onboard the ISS and that shows how important it is. There have been several studies showing that every euro that we invest into the ISS will get back to us with more than twice of that. So it's a very good investment and I'm happy to play my part in that. 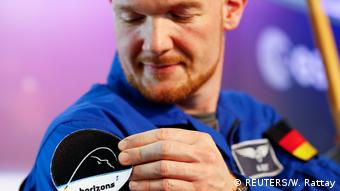 Alexander Gerst attaches the Horizos patch on his astronaut suit.

'Horizons' is the name of your mission. What does horizons mean to you?

Whenever I see a horizon I wonder what's beyond and how I can get there. It's my curiosity and not only mine — I think it's part of the human species. We are explorers. So we want to show that there are many horizons out there that need to be discovered.

You could call humans an island species: We live on an island in the middle of a black universe and we must understand our surroundings in order to survive. It's our responsibility for future generations.

So we want to show that it's important to look at these horizons. It could be Moon or Mars for example. In the case of the Moon, it is only a few days of travel away. That's as much as Antarctica was 100 years ago. By collecting valuable science data for climate scientists about Antarctica [over many decades], researchers helped save the planet. It's one of the many horizons of scientific nature.

Every scientific experiment helps broaden our horizon. We step beyond it and find new things that are critically valuable for us. I want to show young people on Earth that it actually pays off. It is an important thing and a very positive thing for them to take responsibility for themselves in their surroundings. 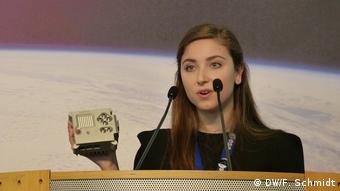 Alana Bartonlini from the ESA education department shows the Astro-Pie, a computer for which kids were invited to write experimental programs.

You worked a lot during your last mission with experiments by and for children. Are there any plans this time to get schoolchildren involved?

Yes absolutely, that's my personal favorite. We had a competition going. The German Aerospace Center DLR and The European Space Agency ESA were looking for suggestions from schoolchildren as well as from university students.

Some of the proposals we selected are very sophisticated. Some are real scientific experiments. I'm looking forward to make sure they happen. Unfortunately I have to use my own free time for it. There is no time planned in the busy schedule of the ISS. But I'm sure I will be able to conduct one or two or three of them in my own free time. It's just so much fun and I am looking at them like a little child myself.

Some of the experiments from my last flight have had really surprising results. Actually scientists at universities are now looking into them and use them for their next experiments.

Will we be able to see such experiments on social media?

For me it's very important to share all that we do up there. When I look at something very beautiful I always have the urge to share. For me, the easiest way is just to take a photo of the Earth — of something beautiful. Then I write a few lines and send them down to Earth and share them with all my friends and supporters. Having them participate in my space mission a little bit really helps me. It's a lot of fun.

Alexander Gerst is a German geophysicist and ESA astronaut. On June 6th 2018 he will travel to the International Space Station for six months. He will serve as the first German and only second European space station commander.

Jessie Wingard conducted the Interview in 2017.

Russian President Vladimir Putin removed his longtime ally Dmitry Rogozin from the top post at Roscosmos, the Russian space agency. No reasons were given for the shakeup.