With tensions running high in NATO, it seems the alliance is in sore need of a fresh course on Russia and a new deal on security. A former US ambassador to Moscow and an ex-German envoy to NATO gave their takes to DW. 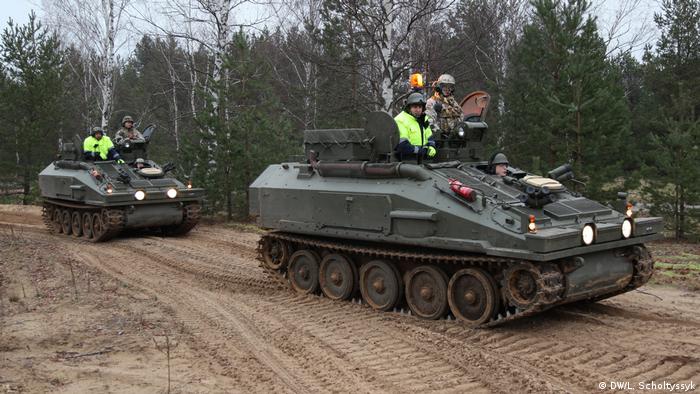 Arguments about reforming NATO have been around for decades. However, President Donald Trump's apparent ambivalence toward the organization's security role has crushed many long-held notions in Europe, launching a new round of soul-searching among the US's allies. In addition to calling NATO "obsolete," Trump has pressured its members to increase their defense spending and signaled a more isolationist foreign policy for the United States.

"Is NATO obsolete? Absolutely!" Jack Matlock, one the last US ambassadors to the Soviet Union and the author of several books on the end of the Cold War and its consequences, told DW. "It was formed to prevent a Communist Soviet Union from encroaching on Western Europe. Russia is not capable of confronting and dominating the rest of Europe," he said.

Unlike Trump, Matlock believes that boosting defense spending would be a step in the wrong direction.

"To think that our disputes will be solved by military posturing is a dangerous illusion," said Matlock, who represented the US in Moscow between 1987 and 1991 and played a key role in reducing the tensions between the USSR and the West under President Ronald Reagan.

"The sort of military jockeying that NATO and Russia are indulging in today reminds me of the geopolitical games played by the Great Powers in 1914," Matlock said. "Are our leaders incapable of learning anything from history?"

The parliamentary leader of Germany's largest opposition party has urged the dissolution of the NATO alliance. Her remarks come after US president-elect Donald Trump described it as "obsolete." (17.01.2017)

Opinion: Putting Putin in his place

President Obama's labeling of Russia as a regional power has ruffled some feathers. But he is right. From a US perspective, Moscow has been allowed to punch beyond its weight for a long time, writes DW's Michael Knigge. (26.03.2014)

After NATO was founded in 1949, its first secretary-general, Hastings Ismay, said its purpose was "to keep the Russians out, the Americans in and the Germans down." Now, with the Soviet Union long gone and the Americans rethinking their role, Germany has risen to become the undisputed leader of the EU on economy and a key global player when it comes to diplomacy.

Germans, however, are still quite happy to let others lead the way on security, Joachim Bitterlich, who served as Germany's ambassador to NATO in the late 1990s, told DW. During his time in Germany's Foreign Ministry, he built a reputation as one of Germany's top authorities on foreign policy and became a close aide to Chancellor Helmut Kohl.

With the United States changing its stance, European powers will need to shoulder a larger share of the defense burden within NATO, Bitterlich said.

"(Trump) has said that NATO is obsolete, and we can argue about what that word means, but I would say it is 'in need of reform,'" he said.

Under Trump, Washington would likely pressure its European allies to boost their military efforts, possibly including interventions near the EU, Bitterlich said.

In the medium term, this tendency should lead to a "European pillar" inside NATO and tighter cooperation between the EU and the alliance. Bitterlich said Germany, with its troubled past, would be most comfortable with France taking the leading role on military matters.

The first task for Europeans would be to prepare for Trump's official visit in May, when he is expected to attend a G7 meet in Italy and a NATO summit in Brussels. This would include putting together a plan to improve and strengthen the defense capabilities of European countries, as well as provisions for joint forces and command structures, more specialization and joint armament programs.

Obama: 'NATO is a commitment that doesn't change'

"In this sense, I believe that the recurrent talk about a European army is neither delusional nor moonshine," Bitterlich said. "We will always work with the US, we will always have to cooperate with them, but we need to take on more responsibility, and that means that we would finally have to grow stronger and more efficient."

Political turmoil between the United States, the EU and Russia comes at a strange time, with US troops stationed near Russia's borders and both countries building up their nuclear arsenals. Moscow's 2014 annexation of Crimea sounded alarm within NATO, and Russia has also been accused of sending troops to the conflict in eastern Ukraine. Last month, the United States positioned tanks, helicopters and thousands of soldiers in the Baltic states, Poland, Hungary and Romania to serve as a deterrent to possible "Russian aggression."

Both Bitterlich and ex-US ambassador Matlock, however, reject fears that Russia might turn aggressive toward NATO.

"Russia is not going to attack a small NATO neighbor, and the US should under no circumstances go to war with Russia," Matlock said. "This is an insane idea."

When it comes to fighting in Ukraine, Moscow's actions of are damaging Russia's "true interests," Matlock said. However, if there had been "no Western or US involvement in Ukraine during the Maidan uprising, there would probably have been no Russian annexation of Crimea or support for the insurrection in the Donbass."

Matlock also said the alliance's setting up of bases on its eastern flank "violates the spirit" of the NATO-Russia Founding Act, which states that the US will not keep troops in Eastern Europe.

"To Putin, the Baltic is already gone," Bitterlich said. "He doesn't really care about it, and the same goes for Poland."

Instead, the Russian president sees the Caucasus and the Ukraine as his "red line," a point completely misunderstood by the US and its European allies, Bitterlich said.

"I believe that both the Americans and the Europeans have simply made too many mistakes towards Russia since the beginning of the century, that they misjudged Russia, needlessly cornered it, not hearing the warnings, the warnings about NATO expansion, about Georgia and about Ukraine," he said.

"Also, the Americans have made a lot of psychological mistakes, including Obama, who described Russia as a 'regional power,'" he added. "The Europeans have also brought Russia and Ukraine in a situation that was, in a way, impossible."

The moment has arrived for NATO to build a more reasonable relationship with Russia, Bitterlich said.

"It will not happen overnight," he said. "Those things take time and both sides need to save face, but if there is a will, there is a way. Americans will try to find this way under Trump, and it would be a good idea for Europeans to do the same and top this American effort."

And, the State Department veteran Matlock said, Europe's security "does not depend on the United States."

If Europeans, including the Russians, "choose to repeat tragic features of their past by fighting among themselves, then the United States cannot save them," Matlock said. "But I do not believe that that will happen."

"Having said that, I would add that Europe will never be whole and free and at peace if it excludes Russia or makes itself an enemy of Russia," he said.