As it happened: Bayern Munich vs. Werder Bremen

On the final afternoon of Matchday 19, Bayern Munich took a seemingly unassailable lead at the top of the Bundesliga. Two goals from two men proved the difference. 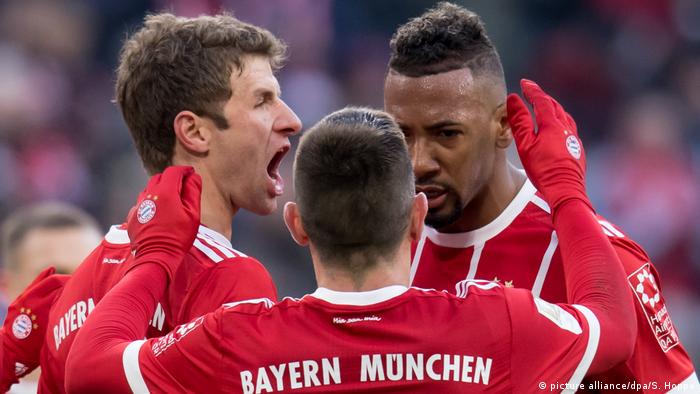 Werder Bremen joined the list of Bundesliga clubs who got no reward for their efforts after Bayern's quality shone through from the hour mark onwards.

Jerome Gondorf gave the visitors a deserved lead, but Thomas Müller's equalizer just before the break proved crucial in the context of the game. Robert Lewandowski put Bayern ahead and although Bremen showed greater spirit to draw level again, it lasted just three minutes before Lewandowski headed home again. Müller put the icing on the cake late on, finishing the day with two goals and one assist. Bayern now sit 16 points clear at the top of the Bundesliga table.

RESULT Bayern Munich 4-2 Werder Bremen They came, they were brave but like most who visit Munich, they were beaten. Werder Bremen stay in the relegation fight, and Bayern move 16 points clear at the top of the Bundesliga - the sixth title looks like it might be theirs faster than ever before.

88' - We have reached the drifting period of the game. Bayern know it's won, Bremen know their effort will unlikely be remembered in the history books. Perhaps only in the one that recalls teams that went to Munich and played but lost - a lot of entries in that one though.

84' - GOAL! 4-2 Bayern Munich (Müller) A brilliant looped pass into the box from James is finished off by Müller. Two for him, two for Lewandowski, four for Bayern. That is that.

80' - Well. After all that excitement, Sandro Wagner came on for Lewandowski. Bremen nearly equalized again for another corner, but Bayern hacked clear. What a game this has been.

77' - GOAL! 3-2 Bayern Munich (Lewandowski) I said they were out of it. Lewandowski takes his tally to 17 with a brilliant header that Pavlenka can only get a fingertip to. And just like that, Werder Bremen will not be rewarded for their spirited display (again).

74' - GOAL! 2-2 Werder Bremen (Süle own goal) Ulreich! The keeper tries to hug Kruse from behind, flaps at the ball and concedes a corner. From the resulting set-piece - which might be the best corner of the season - is inadvertently guided home by Süle's stomach. Who said Bremen were out of it?

70' - Boateng is struggling. Knee or right hamstring is causing him some discomfort. Carrying on, but could be at a price. I remember when he was the best defender in the world, around two and a half years ago. Injuries have really slowed that rise.

69' - Ribery really wants to score today. First shot is deflected but saved, the next is blocked. Just no way through. One more goal and this one really is beyond saving for the visitors.

66' - Florian Kohfeldt urges his side to keep working, but for all their effort they look like they're going to suffer the same fate as most do when they come to Munich. They've played better than most, but look set to leave with nothing.

62' - GOAL! 2-1 Bayern Munich (Lewandowski) Bayern's crossing has been really average today, which is why James' corner is now perfect for Lewandowski to head home. That's 16 Bundesliga goals now this season. A 16-point lead at the top of the table beckons...

58' - Arturo Vidal is coming on for Javi Martinez. Tidy but not game-changing from the Spaniard. Robben also comes off, Kingsley Coman on. Five attacking players now in midfield for Bayern. Approaching the hour - clear to see Bayern are gearing up to win.

55' - Soon time for changes, as the game enters a calm before a potentially stormy end. Ball is stuck in midfield a bit as both try to break forward. Both defending well though. Then Gondorf curls wide. Then Lewandowski misses in the box. Suddenly, the game wakes from its slumber!

50' - Bayern should be in the lead. Müller breaks on the right with Arjen Robben and Ribery in the box, and Lewandowski at the back post. Müller's cross is behind Robben and he can't connect properly. A moment ago, Niklas Süle dropped some serious stepovers in the box. Skills sir!

46' - Bremen make a change at the break: Gebre Selassie is on for Robert Bauer, who had a tough first 45. Second half is underway.

HALFTIME - Bayern Munich 1-1 Werder Bremen (Müller 41' - Gondorf 25')
But for that goal near the end of the first half, Bremen would have put in a brilliant first-half display. A 1-1 scoreline at the break in Munich is normally to be rejoiced, but such is the nature of Werder's display so far that it spoils the taste. All to play for...

38' - This really is impressive stuff from Werder. Ulreich appears to keep the ball from going out, but a corner is given all the same. Comes to nothing, other than a chance for Bayern to break. They do, but Ribery's dance in the box is well defended. Dare I say it, but Bayern look short of ideas.

34' - Kimmich wants a penalty for a touch on the shoulder from Gondorf as he breaks into the box. Doesn't get one. Silly, but soft from the Bremen man. Then James and Süle get shots off in the box - both efforts blocked. The Werder wall is up.

30' - We are where we were. Bayern with lots of the ball, but not making the most of the space. Bremen doing a decent job of keeping them at bay. Difference is, that scoreline. Half an hour gone now too.

25' - GOAL! 1-0 Werder Bremen (Gondorf) That's it. I'm never making pre-game predictions again. Bremen play it out of the corner superbly, Maximilian Eggestein slips in Kruse who has the vision to find Jerome Gondorf. The former Darmstadt player times his run perfectly to beat the offside trap and slide the ball past Sven Ulreich into the far corner. No need to worry about Kruse playing too deep then. Now then Bayern...

22' - I tell you what, Jupp Heynckes is not a happy man. He has just thrown his hands in the air at what his side are delivering so far in this one. Since I said a goal feels close, Bayern seem to have found it harder to find space in and around the box. Thomas Müller (captain today) flicks on in the box, but no one there to meet it.

18' - Bernat persists down the left, but the cross isn't good enough and Pavlenka gathers. Werder working hard to not be overrun, Bayern patiently waiting for their chance. Déjà vu?

14' - The hosts suddenly look to have gone up a gear. Juan Bernat combines nicely, but Martinez's shot is blocked. A goal feels imminent...

11' - Bayern lurk on the edge of the box, but Robert Lewandowski is offside when the ball comes through. Close...

8' - POST! Bayern are ball watching as Kruse smashes a header towards goal which hits the post and goes wide. It was a proper hit of the woodwork too, not just a clip. A wake-up call for the hosts. Question is, was that Bremen's chance for the half?

6' - Robert Bauer tries to take Ribery's shirt off as he breaks in off the left wing. Yellow card, clearly. Free kick is good, but header isn't. Four more minutes and Werder will have avoided the usually fatal early conceded goal.

5' - It's cold in Munich and things are taking a while to warm up inside the stadium. Bayern with lots of the early ball (as per). Max Kruse looks to be playing a much deeper role in attack, which does beg the question who will be scoring for Bremen today?

-- While Javi Martinez makes his 100th Bundesliga appearance for the club, some Bayern fans will be wondering how long Arjen Robben and Franck Ribery (both start) have got left at the club? They can't play forever, can they?

-- The teams are out! Quite an attacking line-up from Bayern. Are Werder capable of handling that attack? A lot of pressure on Werder keeper Jiri Pavlenka, who admittedly has been excellent this season.

-- Good afternoon! Bayern Munich can go 16 points clear at the top of the table today, and likely end the title chase for the 2017-18 season once and for all. In their way? Werder Bremen. A side in the relegation playoff spot, just one point above Hamburg. Bremen haven't been playing badly, but defeat today will leave them adrift.