Armenia goes to the polls: Will the peaceful revolution continue? | Europe | News and current affairs from around the continent | DW | 09.12.2018

Armenia goes to the polls: Will the peaceful revolution continue?

Just last May Armenia celebrated the "world's merriest apocalypse." Now the country is holding the first elections since its "Velvet Revolution." Felix Franz reports from Yerevan. 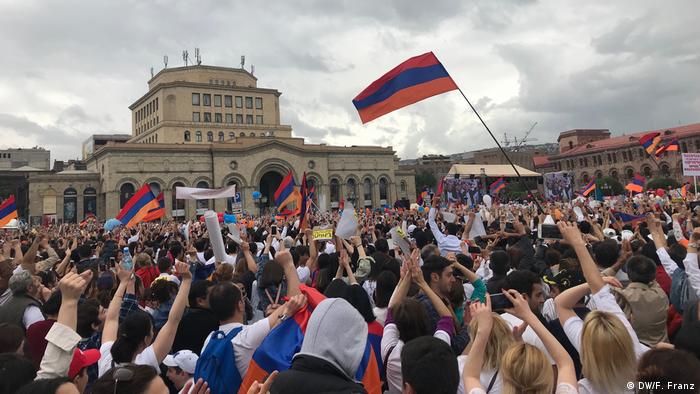 Armenia has shown the world that revolutions don't have to be bloody. In May this year, Armenians toppled their government — by way of a Twitter campaign, civil disobedience and a strategy of (literally) embracing the police. On election day in this small country in the southern Caucasus, the national mood is still one of hope.

"I didn't vote in last year's election," says 21-year-old Gor Grigorian, who has just completed his army service on the border with Armenia's hostile neighbor, Azerbaijan. "We knew it wouldn't change anything. Things are different now. We can really move our country forward," he says.

On the streets of the capital, Yerevan, everyone agrees. They still believe in their "Velvet Revolution."

Yet there don't appear to be many tangible reasons to hope that things will improve. Armenia is still suffering the effects of the almost total collapse of its industry following the disintegration of the Soviet Union. The average monthly income is €275 ($313). Around a million people — a third of the population — live below the poverty line.

Things only changed when the former president, Serzh Sargsyan, executed a brazen political maneuver in an attempt to remain in power. In April this year, although he had promised not to do so, he allowed his party to elect him prime minister, following two consecutive legislative periods as president. Armenians' anger boiled over. Many felt that if they didn't take action, their country would irrevocably become a corrupt one-party state. 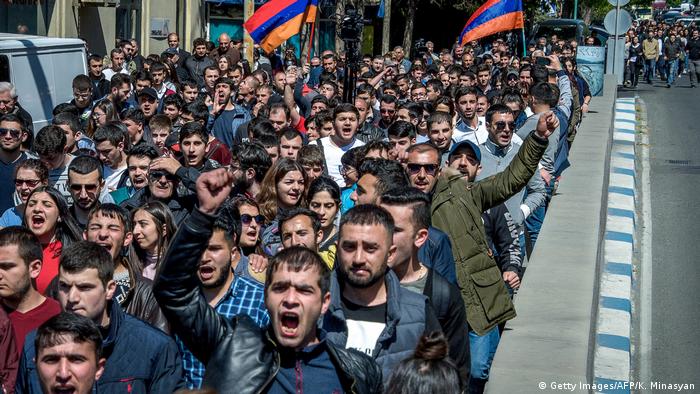 In April, thousands of Armenians demanded the resignation of the then Prime Minister Sersch Sargsjan

They expressed their discontent through civil disobedience. For a whole week, hundreds of thousands of Armenians blocked roads all across the country – with communal picnics and demonstrations on roadways. The capital, Yerevan, ground to a halt. An Armenian in the east of the country described the atmosphere as the "world's merriest apocalypse."

"The protests must remain peaceful. Love and respect for all. As long as you stick to that, you can do whatever you want.” Maria Karapetyan, a 30-year-old conflict researcher and activist who used social media to call for protests, says they kept repeating this like a mantra.

The population took the instructions literally. They sang to police officers, gave them flowers, and kept chanting, "The police belong to us! The police belong to us!" Karapetyan's hashtag #RejectSerzh became the slogan of the protests. At the same time, the political opposition around Nikol Pashinian, who later became prime minister, called for peaceful civil disobedience.

During the protests, Pashinian emerged as the leader of the movement. Then he was arrested — and immediately acquired the status of a martyr and hero of the revolution. The mood became even more heated. Pashinian was freed after just one day in prison — and Serzh Sargsyan stepped down. Two weeks later, amid showers of white confetti, Pashinian was elected acting prime minister by the Armenian parliament.

Back then, in May, Pashinian promised to hold fresh elections as soon as possible, so that his leadership could be democratically legitimized. This is by no means a purely disinterested measure: His newly founded political alliance, "Take A Step," is well ahead in the opinion polls and is estimated to command more than 60 percent of the vote. The Republican Party of Armenia is expected to fail to get the five percent of the vote required for representation in the new parliament.

A renewal of the political class does seem to taking place. Very few politicians in Pashinian's alliance are over 50 or were career politicians before the revolution. Many are young academics, or work as scientists, journalists, or in think tanks. 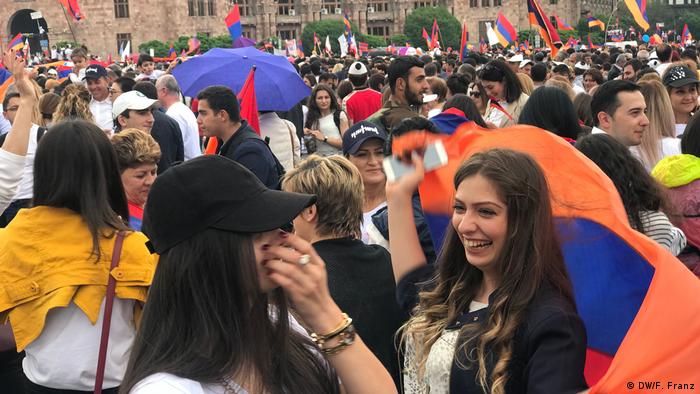 After the election of Pashinjan as Prime Minister on May 8, 2018, his supporters celebrated in the streets

"The people's expectations are far too high," says Olya Azatyan, the Armenia Project Coordinator at the South Caucasus Regional Office of the Heinrich Böll Foundation in Yerevan. The country's problems have been neglected for decades, she says, and there are no quick solutions.

She is worried that the mood will change when Armenians realize politics is a long-term business. "Public political debate here is still very populist," she says. "Politicians must speak more openly — with the people, too — about long-term political strategies."

Azatyan is not, however, concerned that Pashinian's alliance of parties will come to wield too much power. Since the revolution, she says, the whole country has been politicized. "We've just driven out one party and its leader. If Pashinian doesn't stick to the rules, the same will happen to him. I don't have any worries about that."

Where is Armenia headed after a protest leader was elected prime minister? DW’s Tim Sebastian meets the Vice President of the now opposition Republican Party that lost the people's trust after decades of corruption.  (09.05.2018)

Armenia's president has dissolved parliament and called for new elections in December. The move is in sync with acting Prime Minister Nikol Pashinian's plans to gain control of the legislature through snap elections. (02.11.2018)

Armenian PM steps down in bid to consolidate power