Arjen Robben shows his importance and Bayern's weakness against Mainz

A Bayern Munich win in the Bundesliga is not a new kind of headline, but the club's dependency on their two ageing wingers is both inspiring and somewhat alarming. 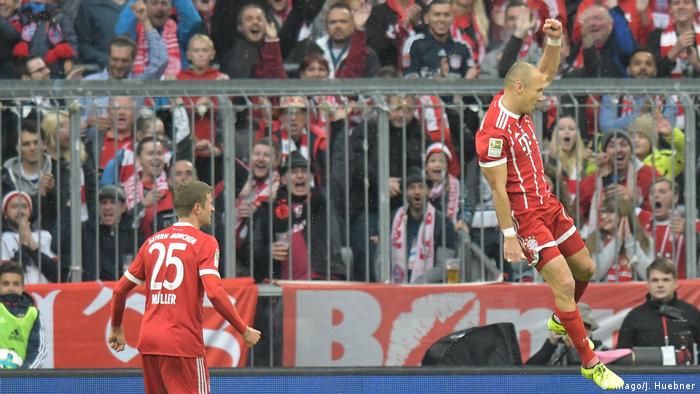 Once again Bayern Munich are forced to answer a question they have too long avoided. Where would they be without Arjen Robben? The Dutchman has delivered time and time again since joining the Bavarians in 2009, and Matchday 4 against Mainz was no different.

Off the back of a league defeat to Julian Nagelsmann's Hoffenheim and a far from convincing European win in midweek, beating Mainz to kick off Oktoberfest was a must. In truth, they battered Mainz.

Bayern put a noisy week behind them and played the high-quality football that has often been noticeable in its absence this season. That is not to say there weren't still moments of sloppiness, but in attack they were more devastating than disruptive - thanks largely to their ageless Dutch winger.

After the win against Anderlecht, Robben lamented Bayern's lack of tempo and said the fans deserved more. Against Mainz, he constantly sought to make the game fast and restore some of the tempo that has so often been wanting under Carlo Ancelotti.

After his teammates failed to take advantage of his fine work, Robben delivered himself. A burst of pace and some wonderful composure to dink the ball over the goalkeeper saw Bayern lead 2-0 at the break, virtually ending the contest.

As impressive as it is to see Robben cut in from the right and score, it is just a facet of his game. The greatest talent of the Dutchman is the space he creates for his teammates. His injection of tempo and intent offers fellow Bayern players the chance to raise their game—and more often than not they do.

Joshua Kimmich is forming the same kind of relationship down the right flank with him as Franck Ribery and David Alaba have. While that is down to his own fantastic development, it's also playing on the same wing as Arjen Robben. Kingsley Coman is getting better all the time, but he still needs Robben to start the engine before he can find top gear. With more space to play with, Thomas Müller played perhaps his best game of the season, deliciously delivering Bayern's third goal on a plate for Robert Lewandowski.

An hour gone, Robben came off. Job done, game over. The man replacing him was the same one he ran over to the bench to celebrate with after scoring in the first half—Franck Ribery. Together, they connect the recent past with Bayern's present. But how is it that Bayern continue to stand on these two pillars?

What are Bayern to do when these two club greats call time? On the one hand, it's a credit to their quality that they can keep delivering, but on the other it's curious that Bayern, or perhaps more accurately Ancelotti, don't appear to have a plan for when the two can't save the day. Bayern dismantled Mainz with a number of players impressing, but once again it only seems fair to ask whether or not that would have been the case had Arjen Robben not wanted it so.