President Mauricio Macri's government has imposed foreign-exchange controls on Argentine exporters. A week of financial uncertainty has led to a sharp drop in the value of the peso. 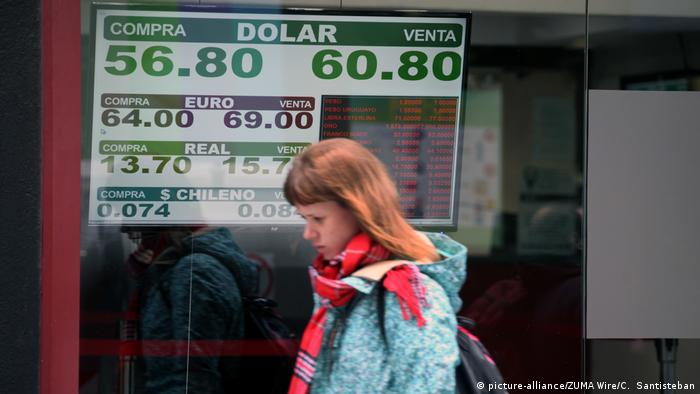 In an effort to prop up the peso, authorities ordered exporters and citizens to seek permission from the Central Bank of Argentina before purchasing foreign currency or making transfers abroad, according to a decree published in the Official Bulletin on Sunday.

In the wording of Sunday's decree, the temporary measures would "regulate more intensely the currency exchange regime and strengthen the normal functioning of the economy."

Individuals seeking to buy dollars now face a monthly limit of $10,000 (€9,100). All these new measures will remain in place until December 31.

Argentina fell into recession under President Mauricio Macri in 2018. The country faces rising unemployment and one of the world's highest inflation rates — running at over 55%. Fearing a default, some Argentines withdrew their savings from banks at the end of August.

On Sunday, a spokesperson said the staff of the International Monetary Fund would analyze the details of Argentina's "capital flow management measures."

The IMF spokesperson added that "staff will remain in close contact with the authorities in the period ahead and the fund will continue to stand with Argentina during these challenging times."

Markets plummeted in August after the Peronist Alberto Fernandez, who has selected former President Cristina Fernandez de Kirchner as his running mate, won 47.8% of the presidential primary vote, with the neoliberal Macri garnering roughly 32%. The runoff will be held October 27.