Argentina's currency and the Buenos Aires Stock Exchange have plummeted, a day after President Mauricio Macri suffered a crushing defeat in a primary election. The peso has shed 15% of its value against the dollar. 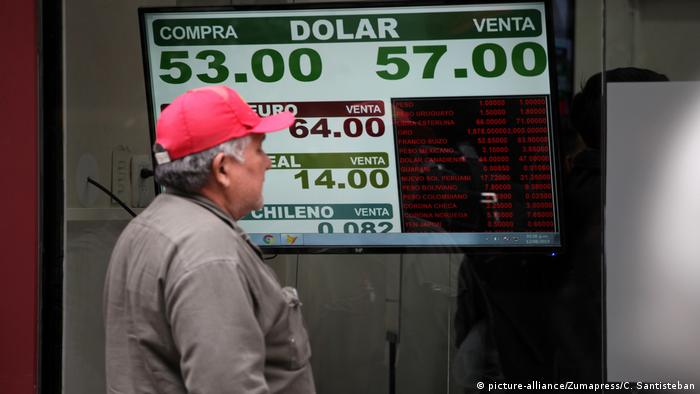 Argentina's peso currency crashed on Monday as jittery investors pulled out government bonds and stocks in the recession-hit South American country, fearing another default following President Mauricio Macri's unexpected defeat to populists in a party primary election over the weekend.

The peso collapsed as much as 30% against the dollar in daily trading before paring back losses to end down 15%. On average, government bonds shed 25% of their value.

Argentina's credit default swap — or the cost of hedging bonds against sovereign default — soared to a multiyear high. Data compiled by Bloomberg now suggests the implied probability of default at 75% over the next five years, up from 49% at the close of trading on Friday.

Argentina is in a deep recession, and inflation for the first six months of the year is at 22%.

The economic crisis became more severe in 2018 when the peso lost about half its value, forcing Macri to strike a $55-billion (€49-billion) deal with the International Monetary Fund (IMF).

Macri initiated a painful austerity program that is widely unpopular with many Argentines, with some 35% now living below the poverty line. Many blame IMF-backed polices for leading to the country's worst economic crisis in 2001, when the government defaulted on its debt following several years of depression.

The sell-off came a day after primary results ahead of October elections indicated that free-spending and state-interventionist populists may crush the market-friendly Macri.

Fernandez has suggested he would seek to "rework" Argentina's standby agreement with the IMF. Markets are also worried over de Kirchner, whose years as president from 2007 to 2015 were marked by a balance of payments crisis, interventionist state policies, currency controls and protectionism. She currently faces multiple corruption probes.

"This is just a taste of what's going to happen" if the populist opposition wins the election, Macri warned on Monday. "We cannot go back to the past because the world sees this as the end of Argentina. The Kirchnerist alternative has no credibility in the world." Macri said he hoped to reverse the negative results from the primary.

"The markets are giving warning that the government has put itself in a position it cannot respond to," Fernandez told Radio 10.

The International Monetary Fund (IMF) has been described as the lender of last resort for countries in financial distress. But the stiff medicine doled out by the fund is still subject to huge controversy. (04.09.2018)

Argentina's president plans to ban ministers from giving family members government jobs. Political scientist Claudia Zilla talks to DW about whether the move will curb corruption and what it means for the wider region. (01.02.2018)

A delegation from the International Monetary Fund is set to arrive in Buenos Aires on Monday for the first time in a decade. It ends years of hostility to the lender from previous governments. (20.09.2016)