Dozens of girls are still missing several days after Boko Haram attacked their school in Dapchi, northeast Nigeria. Their disappearance sparked fears of a repeat of the 2014 kidnapping of more than 200 girls in Chibok. 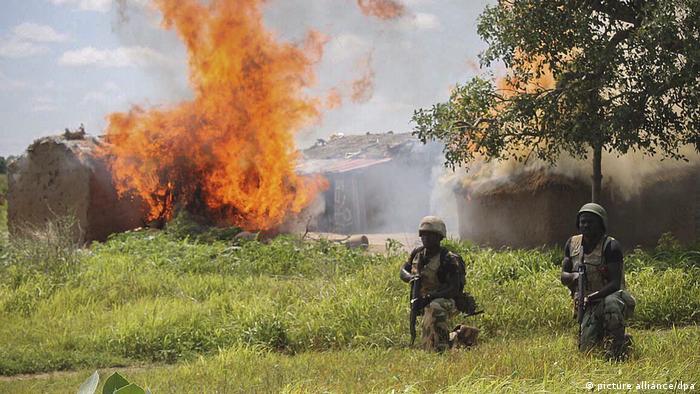 Parents of the missing schoolgirls faced an anxious wait for information on Thursday, after reports emerged that some of the girls had been rescued.

"Some of the girls have been rescued by gallant officers and men of the Nigerian army from the terrorists who abducted them," Abdullahi Bego, spokesman for Yobe state governor Ibrahim Gaidam, said.

But a student who escaped Monday's attack said some of her classmates had jumped over a perimeter wall at the sound of gunfire and got into vehicles parked nearby.

"Our fear is that Boko Haram [members were] disguised as army officers and abducted them in the name of rescuing the students," the student, who doesn't want to be identified, told DW in a telephone interview.

The Dapchi attack raises questions about the government's claim that it has a total grip on security in remote northeast Nigeria. "The government is trying to conceal the fact that Boko Haram is still causing havoc," said Tsambido Hosea-Abana, chairman of the Chibok Association in Abuja.

Feelings of hope and trepidation

"The government spoke just three or four days ago that they have completely degraded Boko Haram and there is no longer any Boko Haram. Immediately after their declaration, Boko Haram did such a thing. So they want to conceal it and state that their version is the truth," Hosea-Abana told DW.

The Dapchi attack also calls into question how far pledges to improve security at schools have been implemented nearly four years after the Chibok abduction brought sustained international attention to the insurgency, largely via the hashtag #BringBackOurGirls.

"The government should take action because they said they have degraded Boko Haram and if they do not take any urgent action to rescue the girls, it would be bad on their part," Hosea-Abana added. 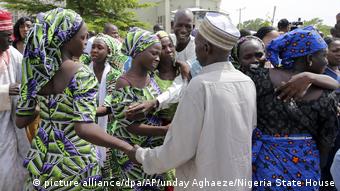 A federal government delegation including Nigeria's defense and foreign ministers flew to Dapchi on Thursday. DW correspondent in Maiduguri, Muhammed al-Amin, said the parents of the missing girls had gathered in Dapchi waiting for the delegation.

Inuwa Mohammed, whose 16-year-old daughter, Falmata, was missing, said he had "mixed feelings of hope and trepidation" about the girls' return. A senior military source in the Borno state capital, Maiduguri, told the news agency AFP some of the girls were "found on the border between Yobe and Borno states."

"The girls were abandoned with the vehicle. It had broken down and the terrorists panicked because they were under siege by pursuing soldiers," he added.

"The fear is that some of the other girls may have been taken along by the terrorists because the girls were not in a single vehicle. Only those in the broken-down vehicle were lucky."

President Muhammadu Buhari was elected in 2015 on a promise to defeat the insurgent group, which is affiliated to the "Islamic State" (IS).

"There are different factions within Boko Haram," said political analyst Professor Sylvester Odion Akhaine. "It is possible that a different faction operating in Yobe state would use the girls for bargaining eventually, since we've seen that being done with the Chibok girls."

"It is reasonable to suggest that the attack has to do with information by security forces that they have decimated much of the stronghold of Boko Haram insurgents and that Abubakar Shekau [the group's leader] is on the run," Professor Akhaine said in a DW interview.

A suicide bomber has killed at least 11 people at a mosque in northeastern Nigeria, near the border with Cameroon. The attack comes as Boko Haram militants step up their campaign of violence in the region. (03.01.2018)