The freed suspects will undergo rehabilitation before reuniting with their families. The trials are part of Nigeria's biggest legal probe into the militant Islamist insurgency that has plagued its northeastern region. 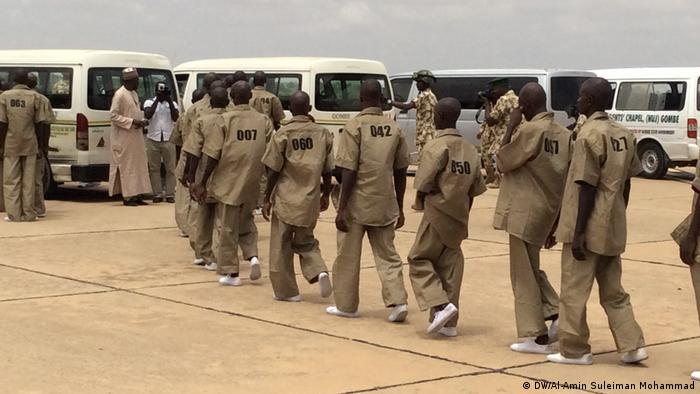 A Nigerian court has released 475 people allegedly affiliated with Boko Haram due to lack of evidence, the justice ministry said on Sunday.

The release order was issued on Friday.

The freed suspects will be returned to their home states for "proper rehabilitation" before being sent back to their families, ministry spokesman Salihu Othman Isah said.

The court handed a second 15-year-jail sentence to Haruna Yahaya, the first person convicted for his role in the 2014 kidnapping of schoolgirls from the town of Chibok. Yahaya was also sentenced to 15 years imprisonment last week.

Both jail terms will run back-to-back, the justice ministry said in a statement.

The trials are the latest in a string of mass hearings which began in October at four specially constituted civilian courts at the Kainji military base in central Niger state.

Humanitarian groups have criticized the Nigerian authorities for holding the Boko Haram suspects for years without trial or even contact with a lawyer.

Isah said the freed Boko Haram suspects were accused of either belonging to the terrorist organization or of concealing information about the group.

Read more: Opinion: Is Boko Haram really on its way out?

"However, the Prosecution Counsel could not charge them with any offence due to lack of sufficient evidence against them. Therefore, the suspects were released," he said on Sunday.

In October, 45 people suspected of Boko Haram links were convicted and jailed. A further 468 suspects were let off.

The nearly decade-long insurgency fanned by Boko Haram militants in northeastern Nigeria has caused more than 20,000 deaths and has forced 2 million to flee their homes. Civilian militia leaders blamed the group for three suicide bombings which left 19 people dead at a fish market in Borno state on Friday.

Five African leaders agreed in Paris to cooperate in the fight against the militant Islamist group Boko Haram. Now it's up to the international community to make sure they keep their promise, writes DW’s Thomas Mösch. (18.05.2014)