Space fans can learn all about the moon, Mars and NASA at a three-day event in the US capital. Whether you want to know about satellite imaging or be run over by a Mars rover — it's all there! 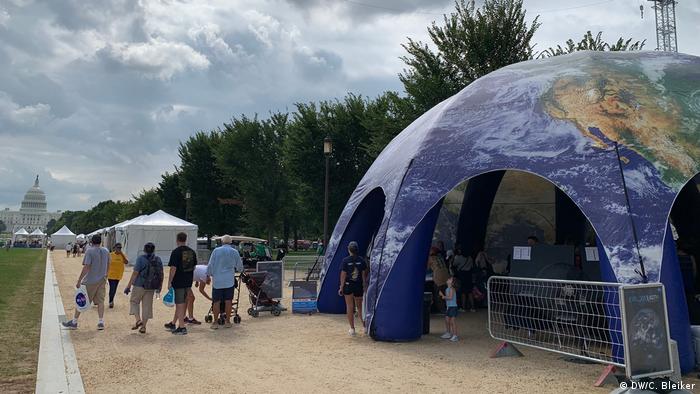 The National Mall in Washington DC is usually a site for big political events. It's where people watch the presidential inauguration every four years, and where Trump supporters came together this Fourth of July for the president's "Salute to America." But this week, the Mall is moon-struck for three days: From Thursday to Saturday, the Apollo 50 Festival is taking over the lawn behind the National Air and Space Museum.

In one of the festival's pavilions, the Earth dome, kids and teens can try their hand at a quiz about Earth and the moon or work on piecing an Earth puzzle back together. Like most of the other 22 festival pavilions, the dome is sponsored by the National Aeronautics and Space Administration (NASA).

"Many of our missions are represented here," NASA spokeswoman Katherine Brown said, adding that visitors could really get a glimpse of "all of NASA." 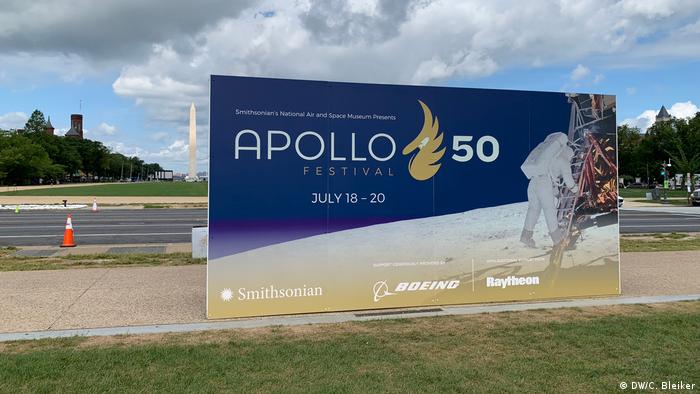 The festival is located in the National Mall in the heart of Washington, between the Washington Monument and the Capitol

The festival is part of the National Air and Space Museum's celebrations to honor the 50th anniversary of the Apollo 11 crew landing on the moon on July 20, 1969. The museum is part of the Smithsonian Institution and one of Washington's most popular attractions. For the moon landing anniversary, it is displaying Neil Armstrong's original spacesuit and a replica of the Apollo 11 command module hatch that Armstrong, Buzz Aldrin and Michael Collins used on their way to the moon 50 years ago.

On Saturday, July 20, the museum will show original footage of the moon landing from 1969 in a special late-night event.

Until then, space enthusiasts can enjoy the festival right outside the museum. The summer heat and humidity turned even just walking around outside into a sweat-inducing affair Thursday morning. But that didn't keep visitors from exploring the science and technology booths at the festival. 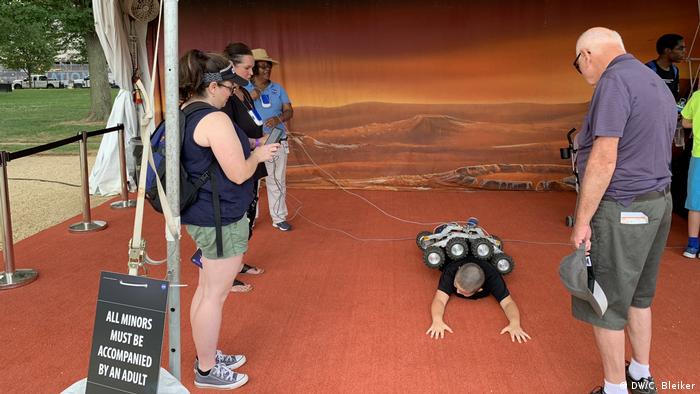 Ege loved having a Mars rover roll over him — "It was cool!"

Inspiring excitement for the space program

In the "Meet Mars Rovers" pavilion, 10-year-old Ege was lying on the floor, letting a Mars rover replica roll over him. Other children were excitedly waiting their turn in line.

Answering the question of whether getting run over by a Mars rover hurt, Ege said, "A little. But it was cool!"

The young boy, who was visiting from Istanbul, declared the rover his favorite thing at the festival. With that, it beat out even a life-sized astronaut built from Lego.

Ege's stepmother Deirdre said she was glad they came to the festival despite the heat.

"It inspires me to think about the space program again," the 46-year-old said. "Kids today don't talk about space the same way we did. There's not as much excitement anymore."

That is one thing Apollo 50 Festival organizers are trying to change. Young space enthusiasts were able to try out lots of NASA technology, like a robot arm, and meet a NASA-uniform-wearing Snoopy. Around lunchtime on Thursday, a line had formed to take photos with the Lego-astronaut. It wasn't unlike the queues families form every year at Christmas to get a shot of their little ones with a department store Santa. 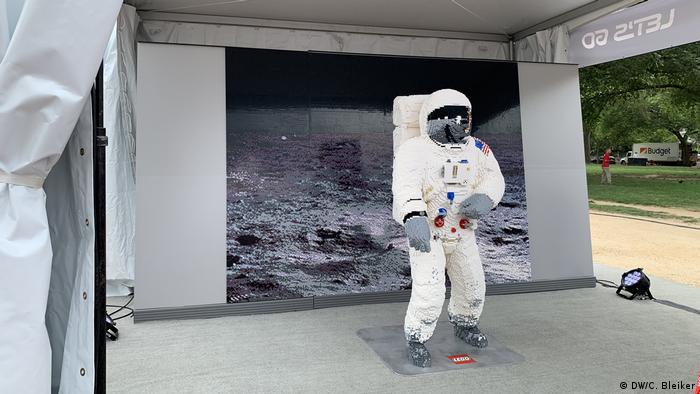 At the Lego pavilion, kids could build their own rockets and take photos with a Lego astronaut

The scientists and engineers at the festival were happy to pass on their knowledge to the next generation of researchers without any of the tensions every political conversation seems to bring at the moment.

"It's a great event because it's not controversial," Debra Hernandez from NASA's Earth Science division said. "It's just fun — and you learn something, too!"

In the Earth dome, Christopher Shuman and Valerie Casasanto from the Joint Center for Earth Systems Technology answered questions about two NASA satellite projects. For ICESat, a satellite shoots lasers from space to Earth to measure, among other things, the height and the thickness of icebergs in Antarctica. 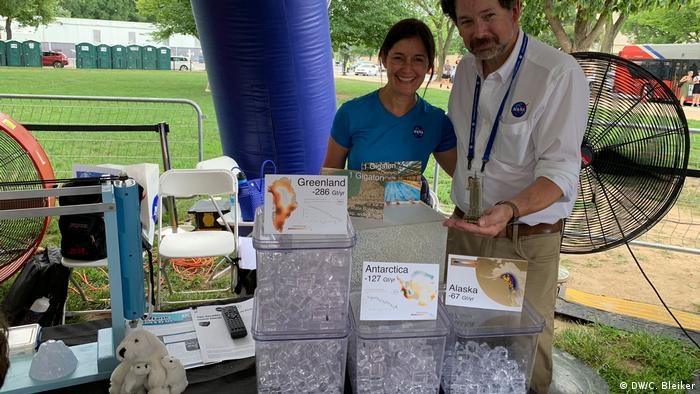 For the Grace FO mission, twin satellites are measuring to what extent water is changing the gravitation on Earth. With this information, the researchers can find out how quickly ice is melting around the world.

"I am trying to tell stories with these satellite images to show changes and help people understand where the situation with ice melting is getting dramatic," Shuman said.

That's exactly what was visualized at Shuman and Casasanto's booth. A large cube, dwarfing the scale model of the Empire State Building, represented one gigaton of ice. Greenland, in particular, loses many gigatons each year, as could be seen in the display's plastic containers for Greenland, Antarctica and Alaska. The entire set-up was more memorable and conveyed the urgent message about the dangers of global warming much better than any row of numbers ever could.

The moon landing in 1969 would not have been possible without this German rocket pioneer. In his past, however, von Braun had built a "miracle weapon" for Hitler's Germany that led to thousands of deaths. (17.07.2019)

It's been 50 years since Neil Armstrong became the first person to set foot on the moon. An incredible step. Even today we are still fascinated ⁠— especially when you see the pictures from back then. (12.07.2019)