Thousands of demonstrators have marched through the Russian capital of Moscow to protest Russia's reported participation in the Ukraine conflict. Fighting in Donetsk has died down following heavy overnight gunfire. 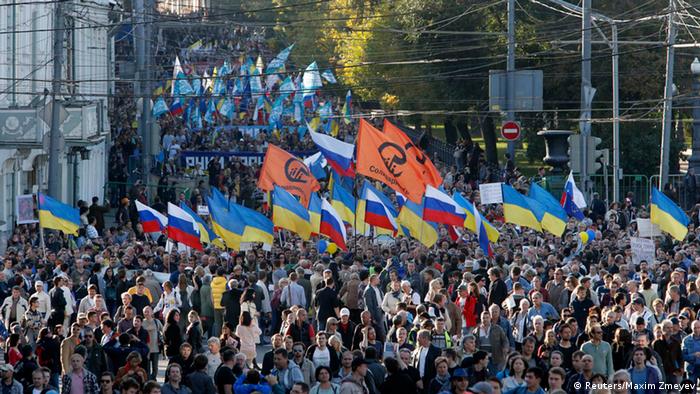 Tens of thousands of demonstrators marched through Moscow on Sunday in protest against Russia's alleged involvement in the Ukraine conflict.

Crowds chanting slogans including "No to war" and "Stop lying!" and brandishing Russian as well as Ukrainian flags marched from Pushkin Square to Sakharov Boulevard in central Moscow. Other placards read "The junta is in the Kremlin, not Kyiv," which referred to Russia's dispute that the ousting of Ukraine's former Russia-friendly president Victor Yanukovych was a coup.

Similar rallies chanting, "Ukraine, we are with you!" also took place in St. Petersburg and other Russian cities.

Organizers had expected 50,000 people to attend the Moscow march with the aim of sending a strong message to President Vladimir Putin - stop the war.

According to Moscow police, 5,000 people attended the march, but an Associated Press reporter estimated to crowds to be four times that figure at about 20,000.

Despite Sunday's marches, however, current surveys show that a large majority of Russians still support the policy of the Kremlin towards Kyiv. Voices that question whether Moscow's actions are harmful not only for Ukraine but also for Russia are almost never heard publicly. 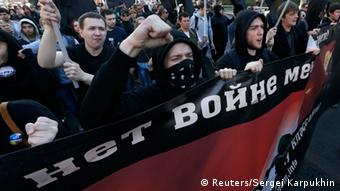 Anti-war protesters marched in their thousands

In an interview with Deutsche Welle, Russian opposition leader Boris Nemtsov said that public opinion is being manipulated and is becoming more fascist.

"The people are fooled by means of agitation and propaganda. A militaristic hysteria of the Ukraine conflict is being imposed in the country," said Nemtsov.

A truce was agreed on September 5, but violations have continued over the past weeks. On Saturday, NATO's top military commander, US General Philip Breedlove, said Russian forces were still operating inside Ukraine and called the truce a "ceasefire in name only". Early on Saturday, both sides also agreed to move heavy weapons 15 kilometers (9 miles) away from the front line on each side, effectively creating a 30 kilometer 'buffer area'.

However, Russia continued to put pressure on new peace plans over the weekend by sending a third convoy to the Ukraine border. Explosions also continued to be heard into Saturday morning, with municipal authorities in Ukraine reporting that a munitions and industrial explosives plant had been hit.

On Sunday, the level of violence appeared to have died down following heavy overnight gunfire in the separatist stronghold of Donetsk.