Anti-Semitism: an everyday phenomenon | Germany | News and in-depth reporting from Berlin and beyond | DW | 30.01.2013

As Germany marks 80 years since the Nazis came to power, German Jews still have to put up with anti-Semitism. Has calling Jews names and telling mean jokes become socially acceptable? 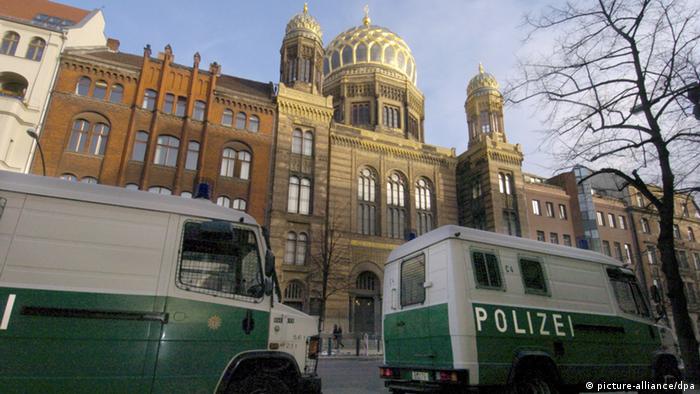 The young people's laughter echoes among the slabs of granite with the words engraved, admonishing the visitor never to forget the dead of the Holocaust.

It is drafty and gloomy in the Cologne synagogue foyer as Ilana Gluz fumbles for the light switch, shivering. Suddenly, someone turns on music downstairs and sounds of a fast-paced pop song boom up the stairwell.

Young men and women have gathered in the communal hall to practice for Jewrovision 2013, a national music contest for young Jews. Germany has 108 Jewish congregations with a total of about 105,000 members, and many will send groups to participate in the grand final in March in Munich.

A young boy with a baseball cap is part of the group that will represent the Cologne Jewish community. He rehearses dance steps in front of a mirror, fully focused, squinting at his mirror image. A few girls are in a heated debate about the t-shirts they have been given to wear: too boring, too conservative. Two elderly women in brown fur coats scurry by. Whispering in Russian, they disappear into the security entrance area. The guard waves through the glass, and quickly shuts the door behind them.

Eighteen-year-old Ilana spends every weekend at the synagogue - at least. Rehearsals for the song contest take up a lot of time, she says. And anyway, she feels the synagogue is her second home. 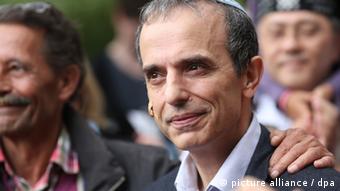 Her home - and until recently, she adds after a short pause, her safe haven. A year ago, she moved from nearby Mönchengladbach to Cologne. In Mönchengladbach, she was counting the days until she could finally join a synagogue and a youth group again and escape abuse and confrontation. Even in grade school, other students would yell "Jewish pig," or: "Hey, Jew, bombed a few Palestinians yet?" She was beaten and attacked with bricks. "In grade school!"

Ilana's Ukrainian grandparents, whose own parents barely survived the concentration camps, urged their granddaughter to show some restraint. Not everyone has to know that you are Jewish, her grandmother would tell her. But Ilana shakes her head: No, she tells everyone that she is a Jew. And why not, she asks. Here in Germany, of all places? "I would rather suffer a slap in the face than lose my dignity," she insists.

Insults and name-calling, even physical violence - yes, nods Berlin Rabbi Daniel Alter as he sits in a cafe near one of the Berlin synagogues, "That's completely normal in Germany." He quotes research which shows that almost one out of three Germans is anti-Semitic. "You can find it at all levels of society," says Alter, who's the Berlin Jewish congregation's new anti-Semitism envoy. Part of his job is to sort the letters and e-mails to the congregation: those with slanderous content go straight to the prosecutor's office. 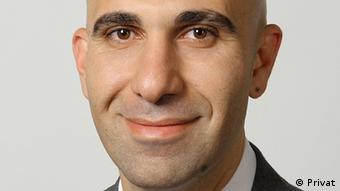 In the drizzly rain, two security guards hover under an archway just a few steps from the Jewish café, hands deep in their coat pockets, carefully watching who goes in and out. For security reasons, cell phones, laptops and other electronic gadgets must be turned off.

Middle Eastconflict as a breeding ground

Armed security guards and security checkpoints watch over Jewish life in Berlin; they stand guard outside the synagogues and the Jewish school. Alter is not happy with the situation, but he accepts it. He has taken to wearing his skullcap hidden underneath a black woolen hat since four young ethnic Arab men last year beat him so badly he was taken to a hospital.

Ahmed Mansour says many ethnic Arab and Turkish people in Germany think like those four young men: he describes them as "latently anti-Semitic." Mansour is an Israeli Palestinian who has lived and worked in Berlin for nine years. He works in an outreach program and gives workshops on tolerance. Mansour says the families are to blame for the current mood. Many Palestinians fled to Germany during the Arab-Israeli wars, he says: "They are highly traumatized." They pass on to their children a warped view in which they are the victims and Jews are the offenders, he told DW. "They do not discern between Jews and Israelis. All Jews are held responsible for the Middle East conflict." Videos in the social media and sermons by hate preachers goad Muslims on, Mansour says.

Ilana points out, however, that anti-Semitism is found among young Germans, too. Recently, a fellow student approached her and said, "Hey, Jew, are you stingy or what?"

There should be more of a spotlight on the issue in schools, Rabbi Alter and Mansour say. Ilana agrees: "Teachers hardly dare discuss the topic." She says she speaks to friends, prepares talks for schools, but to no avail. At times, she fears her anger might turn to hatred. 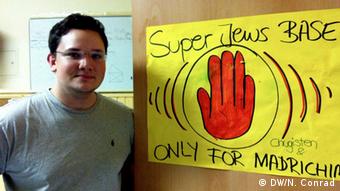 Sammy Porath has cautious plans for the future

Sammy Porath has been the butt of jokes about Jews, but that is the extent of it. The young man makes his way to the basement of the Cologne Synagogue where a hand-painted sign at the door to the youth leaders' office reads Super Jews Base and a bleached out garland of tiny Israeli flags languishes in a corner.

Sammy and his father plan to open a kosher health food store in downtown Cologne, maybe offer halal products, too. The young man can imagine advertising the latter, while keeping a low profile on the kosher aspect. "We don't need a brick tossed through our shop window," he says.

The day's rehearsals are over, the young people turn off the music and leave through the security gate system. The guard turns off the lights and locks the doors.

New wave of anti-Semitism in Berlin

After an attack on a Berlin rabbi on month ago, the German capital has been rocked by two new antisemitic incidents. The Jewish community says society as a whole needs to combat anti-Semitism. (29.09.2012)