Elke Müller is fighting for her daughter Anna, who fell in love with a young Afghan and converted to Islam. Her mother spoke to DW about feeling alienated and her fear that Anna might become radicalized. 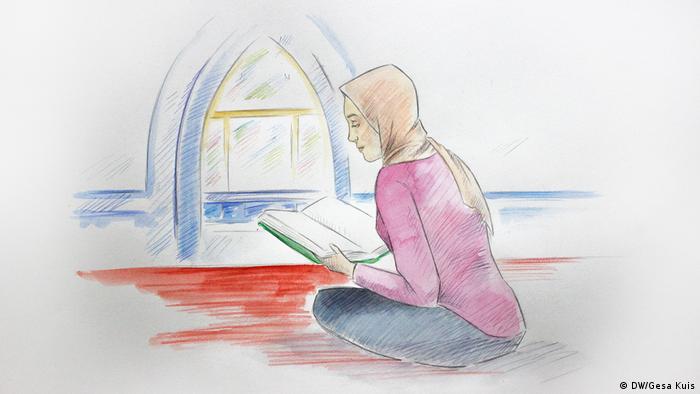 The day that Elke Müller dreads so much is not long off — the day her daughter Anna turns 18. "When she is of age, I can no longer legally hold her back", Müller told DW.

And then, she fears, Anna will marry her first true love, Abdul. If this were to happen, Müller believes she could lose her daughter.

Anna doesn't know that her mother spoke with DW and Müller doesn't want her to find out: she's afraid that Anna might resent her decision to speak out.

That is why she chose not to use her real name.

Still, Müller wanted to tell her daughter's story in order to encourage other parents in a similar situation to seek help.

This story is based on Elke Müller's account. DW has not been able to hear Anna's side of it.

Müller showed DW photos of Anna: Anna as a child, with long hair, laughing. In a more recent picture, taken for Anna's identity card, the teenager has a stern and serious expression, her hair hidden beneath a headscarf.

Elke Müller lives with Anna and her older daughter in a city in the western German state of North Rhine-Westphalia (NRW). She separated from the girls' father when Anna was still in kindergarten.

Anna grew up Protestant, but the family did not attend church regularly. As a child, however, Anna always liked to attend church festivals, according to her mother.

When Anna was 14 years old, she met Abdul, an Afghan boy, whom his mother describes as a good-looking teenager with big brown eyes.

He had arrived in Germany a few months earlier, in the fall of 2015.

He was one of more than 7,500 unaccompanied minors who, according to the Federal Office for Migration and Refugees (BAMF), fled Afghanistan that year to resettle in Germany. 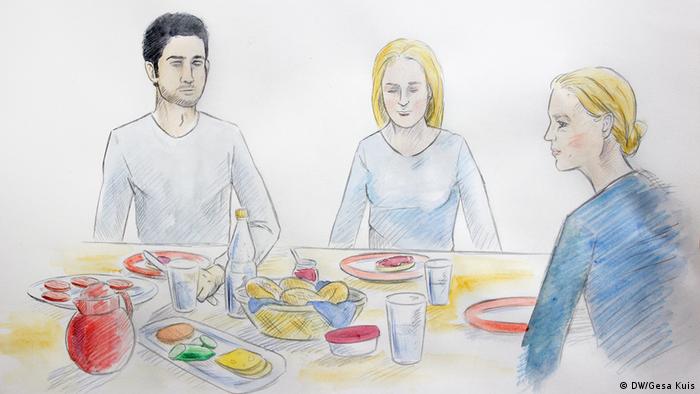 Pashto is Abdul's native language, and, at the time when he met Anna, he knew very little German. He had no school leaving certificate. He applied for asylum, but his request was rejected. Ever since, his legal status has been precarious. As he is now 19 and no longer a minor, he could be deported any time.

Elke Müller says she felt sorry for Abdul. "I even developed something like motherly feelings for him." She says she made quite an effort to show her daughter's new boyfriend that he was welcome and on several occasions invited him to the family's home.

Right from the start, Anna was totally enchanted by Abdul, Elke Müller recalls.

The mother, on the other hand, soon felt uneasy about the relationship. She noticed changes in Anna that worried her. Anna began to wear a headscarf and pray. "I asked Abdul about it," Anna's mother says. "He said she did it voluntarily and that he never asked her to do it."

At the age of 15, Anna told her mother that she had converted to Islam. At that time, she had been dating Abdul for around nine months.

Anna felt the urge to learn as much as possible about her new religion, as quickly as possible, her mother said. She started trawling the internet. Her mother recalls "strange websites" of self-styled Salafist preachers.

Salafism is an extremely conservative current within Islam. Salafists espouse a strict interpretation of the Quran, which most Muslims consider far too radical.

Many reject secular laws such as the German Constitution and only live by the Sharia, the Islamic law. According to the latest Domestic Intelligence Report for NRW issued by the Office for the Protection of the Constitution, the Salafist scene in the most populous German state has around 3,000 members, 800 of whom are classified as "radical" and "ready to resort to violence."

Read more: How a German mining town became a recruiting ground for IS

Elke Müller wanted to find out what websites her daughter was spending so much time on, and so she started visiting the same sites and was quickly alarmed at what she found: for example, the website of Pierre Vogel, a German convert and maybe the best-known self-styled Salafist preacher in the country. "I asked myself how I should react, whether I could or should forbid something."

Elke Müller sought help, initially from a Protestant counselling center. Then she was put in touch with "Grenzgänger" (roughly: "border crosser"), a counseling network in Bochum, a city in Western Germany. Relatives or teachers can turn to the organization when they fear young people may be showing signs of religious extremism. It receives funding from the German state.

The team consists of social workers, psychologists and Islamic scholars. Since starting out in 2012, it has worked with several hundred cases, social worker Susanne Wittmann estimates.

"Mrs. Müller contacted us early in her daughter's radicalization," Wittmann says. Still, it quickly became clear Anna was at risk of becoming radicalized. "When young people start researching on their own and trying to inform themselves about Islam on the internet, they always end up with the wrong people." 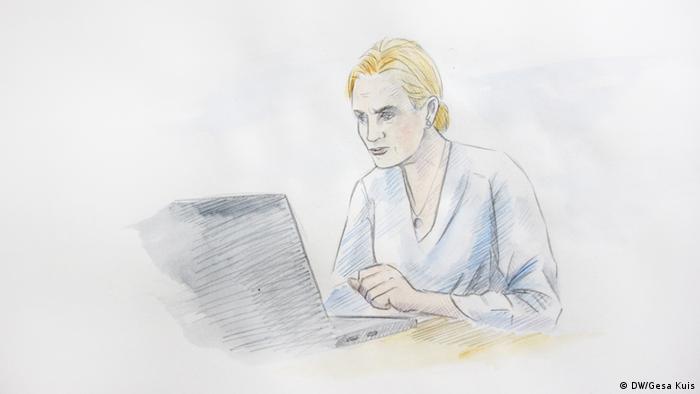 By wrong people, Wittmann is referring to radical Salafists who for years have been using their strong online presence to recruit new followers and specifically recruit young people to join radical groups in Syria and Iraq.

Women — who only make up 12% of the Salafist community in NRW according to the Domestic Intelligence Service — are increasingly active online, according to its latest annual report.

Islamic studies in a protected space

After Elke Müller contacted "Grenzgänger," Wittmann visited the family in their home. There she met Anna who she describes as someone who was clearly on a quest. She hadn't formed a cohesive view yet, the social worker told DW, meaning she was still open to other influences. "Otherwise we might not have been able to reach her."

"Grenzgänger" helped Anna find a more moderate mosque, based on a police officer's recommendation. There, she joined a women's group. Its leader soon became a personal mentor for her. As she told DW, she used to be in contact with Anna almost every day.

The leader — who does not want to reveal her name — still clearly remembers her first encounter with the young girl. "From the very beginning, I admired Anna's determination, especially at her age. She really wanted to understand her new faith. Anna asked many questions: about prayer, about fasting, about the appropriate behavior on school trips. Once, she even wanted to know whether Islam allowed for a nose piercing."

Anna regularly took part in the girls' group once a week for about a year, the leader recalls. The mosque also offers a group for young men, which Abdul was invited to join, but he declined. "He came to a meeting once, but didn't seem to like it. He said he already had enough knowledge about his religion", said the leader.

She added that Abdul was neither radical nor dangerous. "He seemed rather naive to me, someone who was in need of support himself. He is a very traditional person, but he doesn't have much knowledge about Islam." And unlike Anna, he was not searching the Internet for answers.

Anna stopped coming to the mosque a few months ago. "She said she wanted to shift her focus elsewhere", the leader said. Apart from that, Anna didn't give any reasons for her decision. However, she still occasionally contacts her former mentor via WhatsApp.

None of the people involved knows whether Anna has chosen to go to another mosque And if so, whether she may have joined a less moderate one or turned back to her former mentors online.

And there's another thing that keeps troubling Elke Müller. The young man talked repeatedly about going back to Afghanistan in order to take care of his sick mother. "He said: 'When Anna is of age, we are going to get married.' And I just thought: Oh my God! If she goes to Afghanistan with him, I won't ever see her again." Elke Müller mainly associates the country with war, terror and the Taliban. She doesn't even know where in Afghanistan Abdul is from.

Anna has reassured her mother that she has no intentions of leaving, but rather wants to stay in Germany with Abdul. Elke Müller clings to this promise — as well as to the fact that her daughter wants to complete a degree in higher education. But Elke Müller is afraid that Anna could throw all this overboard if she were to marry.

According to social worker Wittmann, this fear is not completely unfounded. "It's not so unusual for a girl to follow her boyfriend abroad. I think Anna doesn't have enough knowledge about what is happening in Afghanistan at the moment and the situation there. At this point, Wittmann also has not ruled out a later radicalization. "Anna is still very young. There is always a possibility that a personal crisis will upset her balance."

Meanwhile, Anna's birthday is coming closer and closer — the day that her mother fears so much. Then, she says, "I will know whether I am to lose her."

*Editors' note: All names have been changed to protect the identities

When your daughter suddenly becomes radicalized

Children's life decisions are often difficult for parents to bear and even more difficult to understand — especially when the children radicalize themselves. DW met an affected German mother. (10.11.2018)