No one knew her weeks ago and now she's everywhere. Get a glimpse into Ann Sophie's world: Germany's Eurovision candidate tells DW what it's like to be in the spotlight - and what she'll do if the music career flops.

DW: Ann Sophie, you will soon be performing for 120 million TV viewers in the biggest music competition in the world. Do you still manage to sleep well?

You came as an outsider to the German national final. Just a few weeks ago, you were nearly an unknown soul-pop singer and now you're the German candidate for the Eurovision Song Contest. Don't you feel it all went too fast?

Of course, it's a lot all at once. It feels like I can't even take a day to rest or sleep in. But this is a really exciting time: I'm trying to take as much as I can with me. I don't want it to stop because I really love what I'm doing - with everything it implies. 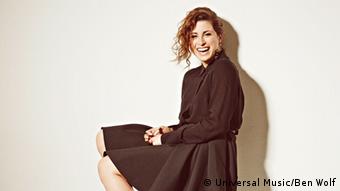 Ann Sophie Dürmeyer (24) was born in London as the daughter of a German banker,

You were born in London and grew up in Hamburg. You studied acting in New York for three years while also singing in jazz clubs. How did you decide to focus on music only?

Acting still means a lot to me, I would like to pursue that as well. Yet music and singing are an even greater passion. When I sing, I'm in a different world. And once I'm there, I don't want to leave it either.

In 2013, you released your self-produced album. Now right in the middle of the action of the Eurovision Song Contest you've released the album "Silver into Gold," your first album with a major label. Are you happy with the result?

I'm totally happy. We took four of the songs I wrote and it was great to sing other people's songs too. I'm very happy, even if the time in studio was extreme: I had to sing all those songs in five days. That meant working 12 hours a day. Here I'd like to compliment my vocal chords for not giving up on me! (laughs) 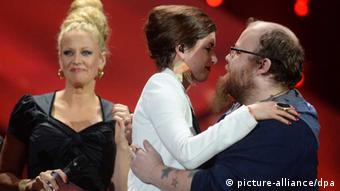 He shocked everyone at the national final: Winner Andreas Kümmert (right) gave his title to Ann Sophie (center)

Back to the Eurovision Song Contest: At the German national final in Hannover, the majority of the viewers voted for the soul singer Andreas Kümmert. Then he backed off and left you, as the runner-up, take the title. How did you experience that?

I was happy as I first realized: "Cool, I'll get to go to Vienna!" But then I also thought: "Hmmm… somehow the audience has mixed feelings about this. He won and I got second place. Do I deserve this, may I go?" But then I decided quite quickly: "Now come, Ann Sophie, this is a huge gift and you're going to look forward to it!"

For someone who hasn't been professional singer for such a long time, you're quite confident on stage. Do you get stage fright?

Totally! Before every performance my heart starts racing. I'm always excited and I always have respect for the situation because you never know what could happen. A voice can break sometimes.

For the Eurovision Song Contest finals in Vienna you'll be singing "Black Smoke." It's about a love story that dissolves into smoke. Isn't that a gloomy theme for the song contest?

There are gloomier themes, I think. Love is everywhere and it's a theme everyone can relate to. And the arrangements and the structure of the song don't make it feel like a sad one. Everyone thinks all the time: "Yeah, this is working!" 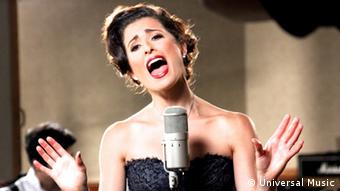 At the final in Vienna, Ann Sophie will be competing against contestants from 26 countries

According to the odds of Eurovision Song Contest bookmakers, you're rather on the rear seats. How do feel about this?

I must make the most of my three minutes, I'll give it my best. And I'm invited on this great stage, which in itself is something special. I don't have any influence on what happens afterwards and what the viewers decide. I don't read too much about that, because it would unsettle me too much. Yet I'm realistic too and I know I must be prepared for anything and it's just as possible that I end up last.

Which position do you hope to land?

I hope to be among the top ten.

As Germany's candidate, you are representing the entire country, in a way. Is this a burden for you or does it add pleasure to your performance?

I see it as something fun. This is such a rich period in my life, an opportunity which won't show up again. The only thing that's intimidating in this case is that if I get a very bad result, all Germany will get excited and say: "Yeah, right, we knew it! You weren't second by accident!" But why should I worry about this now?

The Eurovision Song Contest launched some participant's career. Others completely disappeared shortly after. What are you hoping for?

There's been so much happening already. We did the album. I'm sure I'll keep doing music. I wrote a children's book that I'd like to publish. I'd like to get back to acting as well. I don't hope to disappear from the scene. But often this "disappearance" just leads to another life.

Finland's punks with Down syndrome make bold statement at Eurovision

From monsters to a bearded woman - the Eurovision Song Contest has crowned many extravagant performers. This year, Finland has selected an unusual punk band for the competition - and its members have Down syndrome. (31.03.2015)