Angela Merkel's conservatives have insisted they won't make any more concessions to the Social Democrats before formal coalition negotiations begin. SPD delegates are set to vote next week on the preliminary agreement. 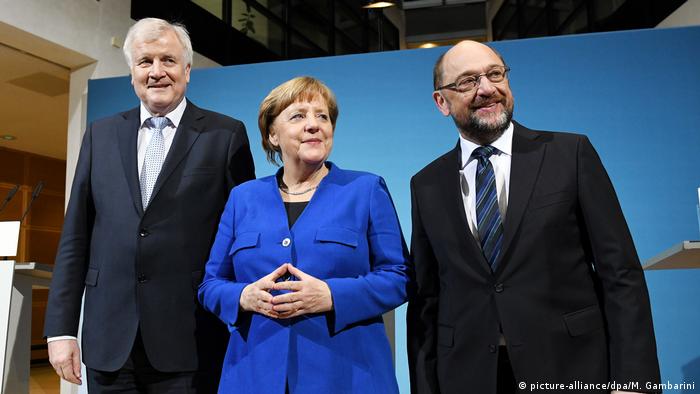 SPD lawmakers said they hoped that the parties could still agree on a new social security scheme and firmer employee contracts in the would-be coalition's policy blueprint.

However, Germany's conservative bloc — made up of Merkel's Christian Democrats (CDU) and their Bavarian sister party, the Christian Social Union (CSU) — swiftly dismissed the calls, insisting that the SPD first vote on whether to move on to formal negotiations before demanding more concessions.

"The CDU/CSU and the SPD were in serious talks and not singing 'Ring a Ring o' Roses' in the playground," CDU lawmaker Thomas Strob told the German media group RedaktionsNetzwerk Deutschland. "What we have agreed upon with each other is valid," he said, adding that anything not discussed during the week of preliminary talks "won't become part of a coalition contract."

Meanwhile, deputy CDU leader Julia Klöckner took to Twitter to call out the SPD. "We're counting on reliability," she tweeted. "Everything was negotiated in a package, no cherry picking please!"

On Friday, SPD leader Martin Schulz heralded the 28-page policy blueprint that leaders of the CDU, CSU and SPD drew up after five days of negotiations. Key policies included a freeze on tax hikes, limiting the influx of asylum seekers to between 180,000 and 220,000 per year, and supporting France's push for comprehensive eurozone reforms.

Nevertheless, major figures within the SPD remain very reluctant to enter into another coalition with Merkel's CDU/CSU bloc, particularly after all three parties suffered their worst election results in decades in last September's vote.

Schulz has promised to let the party have the final say on whether to re-enter a grand coalition. On Sunday, 600 delegates will be asked to give the green light to enter formal talks, while party members are expected to get a vote on a deal if and when it is finalized.

Several SPD figures said they wanted to make some of the outstanding issues front and center at Sunday's party conference.

Malu Dreyer, an SPD member and premier of Rhineland-Palatinate, told Germany's Funke media group, "We will try to make more gains in the coalition negotiations." SPD General-Secretary Lars Klingbeil said social security and employee rights had to be "part of the conversation."

Berlin's mayor, Michael Müller, meanwhile, said that the preliminary talks fell well short of party expectations, particularly when it came to living conditions, immigration and integration. Speaking to Berlin's Tagespiegel newspaper, Müller also refused to rule out the possibility of talks collapsing and the need for new elections.

In a further sign of the difficulties that lie ahead before next week's votes, the SPD delegates in Saxony-Anhalt on Saturday rejected the would-be coalition's policy blueprint and narrowly voted against starting formal talks with Merkel's conservatives.