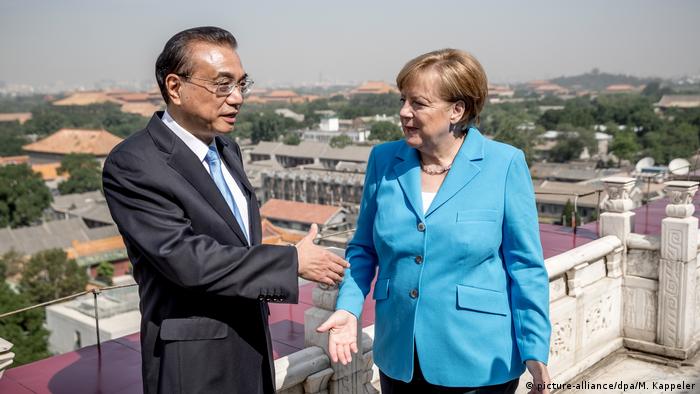 Merkel's trip to China comes amid rising tensions in both Beijing and the European Union over trade relations with the United States, as well as US President Donald Trump's decision to pull out of the Iran nuclear deal.

Merkel said both Berlin and Beijing would stand behind the existing 2015 deal that saw Tehran give up its nuclear weapons program in exchange for sanctions being lifted on Iran.

While admitting that the Iran deal is not perfect, Merkel added that the alternatives are even more uncertain. She also said the imposition of US sanctions could force some European countries away from business with Iran.

The leaders agreed that dialogue should continue with North Korea after both Washington and Pyongyang threatened to call off what would be a historic summit scheduled for June 12. Merkel said she hoped for denuclearization on the Korean Peninsula and that she had seen "very hopeful things recently."

The chancellor told Li during their meeting at Beijing's Great Hall that there was scope for closer cooperation between Germany and China and that the two sides should hold regular bilateral meetings, not just on business and trade, but also on human rights.

"Then our conversations can center on really where there are still problems, what the solutions are and what the opportunities are," Merkel said. "Then we can play our part in a global, multilateral system."

Addressing the human rights situation in China, Li said the country's constitution respects human rights and added that he hoped China and Germany could discuss rights issues on a case-by-case basis. He did not mention Liu Xia, the widow of Nobel Peace Prize winner Liu Xiaobo, who has been under house arrest since 2010 without being charged with a crime.

The chancellor also stressed her continued commitment to the trans-Atlantic partnership with the United States, despite facing increased tensions and less common ground with Washington. Both Berlin and Beijing have decried Trump's decision to walk away from the Iranian nuclear accord, while both also face being slapped with punitive trade tariffs by Trump administration.

The chancellor is set to meet with Chinese President Xi Jinping later on Thursday for further talks.

On Friday, Merkel is slated to travel to China's technology hub of Shenzhen with a German business delegation.

German business leaders and lawmakers have long protested the uneven playing field. Some businesses have said they feel they are being squeezed out as China's workforce reaches a higher level of expertise, albeit without always playing by international rules or respecting international copyright and patent laws.

As a result, business leaders from Germany have requested easing conditions and introducing greater market access for firms doing business with China.

Those complaints have grown more vocal in recent years, particularly as China's investment into Europe has jumped from €700 million ($819 million) in 2008 to €35 billion just eight years later.

However, Merkel also lauded China for its fast-paced economic growth and its technological development during talks with Li. Trade between two sides continues to reach record highs.

The escalating trade dispute between the US and China has already caused noticeable damage for Germany, Holger Bingmann, president of the German Federation of Wholesale, Foreign Trade and Services (BGA) tells DW. (06.04.2018)