Angela Merkel calls for ′loyalty′ from German Turks | Germany | News and in-depth reporting from Berlin and beyond | DW | 23.08.2016

Chancellor Angela Merkel has called on German people of Turkish origin to "develop a high degree of loyalty" to Germany. Members of her conservative Christian Democrats have also called for an end to dual citizenship. 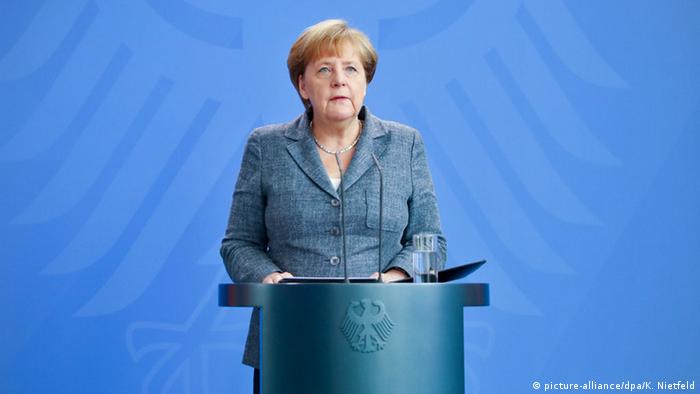 Chancellor Angela Merkel made a new statement addressing fears among her conservative supporters about the divided loyalties of German Turks, a debate that has escalated in the aftermath of the attempted military coup against President Recep Tayyip Erdogan.

"Of those people of Turkish origin who have been living in Germany a long time, we expect them to develop a high degree of loyalty to our country," the chancellor told the "Passauer Neue Presse," a Bavarian newspaper. "In exchange we will try to keep an open ear to their concerns and to understand them."

Referring to a recent and much criticized pro-Erdogan rally that brought thousands of German Turks to the streets of Cologne to oppose the coup, Merkel took a similar line: "The freedom of opinion and demonstration applies in Germany to everyone who lives here, but of course everyone has to express their differences peacefully." There was no violence at the rally, which, though organized by representatives of the Erdogan administration, also included some opposition speakers.

'Part of Germany for decades' 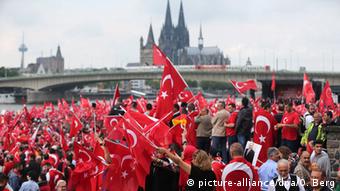 "It's unacceptable that on the basis of the participation of people of Turkish background in a demonstration in Cologne that a loyalty debate is flaring up and milestones of social participation and belonging such as dual citizenship are being questioned," Sofuoglu said in a statement.

"We have been a part of Germany for decades and have considered ourselves as such for years," Sofuoglu said.

The conservative wing of Merkel's Christian Democratic Union (CDU) - often represented by its Bavarian sibling party, the Christian Social Union (CSU) - has recently reignited Germany's endless debate about the cultural assimilation of Turkish and Arab communities. As well as renewed calls for a ban on the burqa and the niqab, several politicians have called for the abolition of dual citizenship so as to force people with mixed parentage to choose which country they belong to.

"Dual citizenship is becoming more and more the rule. We don't want that - that's why we want to return to the old citizenship law," CSU General Secretary Andreas Scheuer told the "Rheinische Post" newspaper. He added that only immigrants who have lived in Germany for a long time and have clearly professed their allegiance to the country's "values and principles" should be granted citizenship.

Germany's citizenship laws were reformed at the end of 2014 so that people born in Germany to non-German parents and raised there were allowed to keep both German nationality and that of their parents. The law change was hailed at the time, not least by German President Joachim Gauck, as an "expression of the reality of a growing number of people."

The TGD has a withering response to Scheuer's demand to revert to the older law: "As always he left open the question of what having multiple nationalities has to do with loyalty to the society in which a person lives." 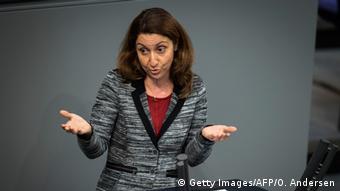 Other political voices in Germany's integration debate were also skeptical about Merkel's sentiment. Aydan Özoguz, the government's integration commissioner and a member of the Social Democratic Party (SPD), told the "Funke" media group that a significant majority of German Turks feel like they belong to Germany, and that their trust in German institutions is "undiminished."

"For that reason we shouldn't generalize and accuse these people of having loyalty conflicts," Özoguz said. "Instead, we should engage actively with those who want to express their Turkey-orientated political ambitions on German soil and use our free system for that."

"In this country it's not about loving the president or the government, but we should be allowed to expect respect, especially for our basic principles and the democratic rules," Özoguz said.

Meanwhile, Cemile Giousouf, integration spokeswoman for the CDU, said she supported Merkel's demand. "The German government invests a lot and works hard and sincerely so that everyone in Germany has the same opportunities," she said in a statement to DW. "There are many possibilities within the legal and the value system in Germany to offer your opinion and even criticism and help form the country. For me loyalty is demonstrated when people participate beyond their own or their group's interests for the community."

Germans of Turkish origin are being "menaced" by informers and officers of Turkey's MIT spy agency, according to "Die Welt" newspaper. Bundestag members want a probe into whether German agencies are complicit. (21.08.2016)

Turkey could join the European Union by 2023, its EU ambassador told a German newspaper. This follows comments by Germany that Ankara faces a long and difficult path to EU accession. (19.08.2016)