The German Chancellor and the celebrated Nigerian feminist author discussed politics, and how they are influenced by social media — and fashion. 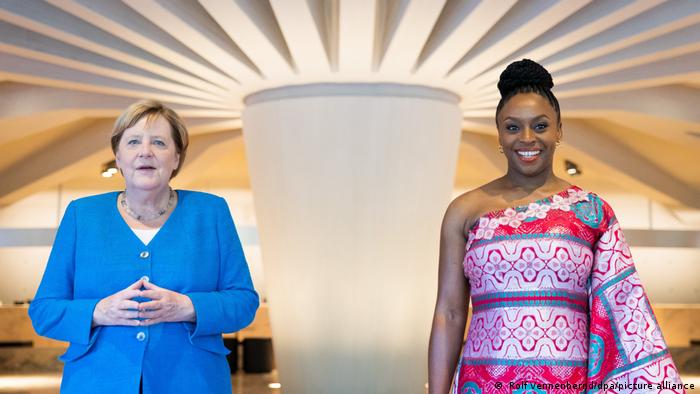 Renowned Nigerian author Chimamanda Ngozi Adichie and Chancellor Angela Merkel were the guest speakers at a panel held at the Düsseldorf's Schauspielhaus theater on Wednesday, alongside journalists and entrepreneurs Miriam Meckel and Lea Steinacker.

Their discussion focused on their own commonalities and differences, particularly as women: Adichie, as a leading feminist author and thinker, and Merkel, as the world's most powerful female political leader. 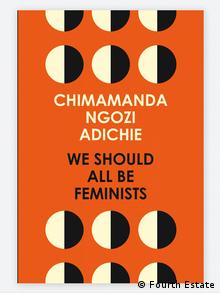 Merkel's statement on feminism was inspired by Adichie's powerful essay, 'We Should All be Feminists'

At the event, the German chancellor made headlines for stating publicly for the first time, "Yes, I am a feminist."

But the two women also discussed several other topics, including the state of democracy, social media, and even fashion.

Merkel was introduced with a selection of praiseworthy labels she has been given over the past years, including "defender of the liberal West."

Merkel reacted to the tribute by saying: "I am happy that, following the German reunification, I have been able to stand up for liberal, democratic values and can work for a free society, as chancellor," all while adding, "But one needs to look beyond exaggerations and thankfully there are many people who feel connected with democracy, and that makes me happy."

As Merkel pointed out, her last days as chancellor — a position she has held since 2005 — have been marked with "apocalyptic" floods and the withdrawal of US troops from Afghanistan and the country's takeover by the Taliban.

Amid such chaos, is there hope for a better world? Chimamanda Ngozi Adichie pointed out that the world has survived many political catastrophes. "So I think there's reason to be hopeful but in a way that is very cautious. But it also requires political will. I really think that there is a certain failure of leadership … the things going on today, they were not inevitable. They did not have to happen." 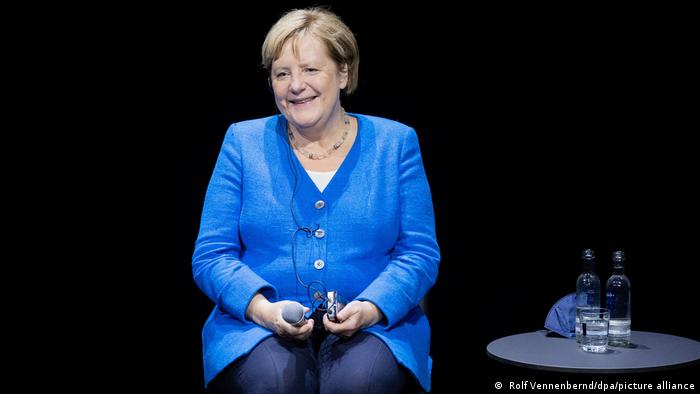 As she is about to leave office, Merkel can take a more relaxed approach

But are only leaders to blame? "In order to preserve democracy, we need more than just politics," said Merkel, adding that culture, history — the question of where we come from and where we're heading — need to be preserved to keep a society together.

"We [politicians] cannot order others to do this ... Good politics can stimulate, but cannot force democracy. If everyone decides to break traffic rules, we cannot make everyone a police officer. The constitutional democracy lives off the fact that it has a high degree of acceptance among its people and this acceptance has to be learned by every new generation."

Democratic values appear to be eroding in many countries, including Poland and Hungary in Europe, where populist governments have curbed many rights, including freedom of expression and freedom from all forms of discrimination based on sex, sexuality or gender.

Adichie discussed the way some politicians manipulate people's discontent and use that as an excuse to introduce undemocratic laws: "What I feel, watching the US — it's my second home after Nigeria — is that we need to have an educated and informed electorate, otherwise it's very easy to manipulate people," she said.

Social media can be used to inform, "but it can also be very dangerous in keeping us from truth," she added. Some platforms, she said, "thrive on conflict. People go on these platforms and the goal is conflict, the goal is to misinform."

So, Adichie asks, how do we create an informed electorate and how do we tell people the truth?

In her view, people need to read more. "When I say read, I don't mean read text messages or tweets," she noted. "I mean, read something that is continuously long and makes sense, that is punctuated and has good grammar."

In her own way, Adichie continues to educate people to accept different narratives — even through her choice of clothes.

For the event in Düsseldorf — often labeled as Germany's fashion capital — Adichie wore a printed outfit that had been repurposed from her mother's wrapper that was traditionally tied around the waist.

She sees fashion as a way to promote the fact that "there is a lot of talent in Nigeria and it needs a platform that's international." 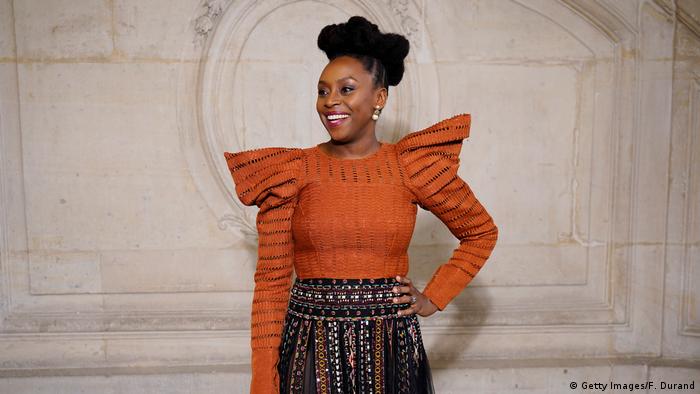 "My outfits, as people say, are modest," replied Merkel, whose practical dress sense has been praised for its simplicity, but also criticized by other observers, including the late designer Karl Lagerfeld, who said he was ready to give her some fashion advice.

She noted that while the designers dressing, for example, French politicians or former US first lady Michelle Obama have often been widely promoted, that same type of acknowledgment is rarely granted to African leaders, who often wear vibrant clothes, because "we are too ignorant," Merkel said.

"And we try to hide that by not asking too many questions, but anyone who engages with the continent's ethnic diversity, with how the colonial powers drew boundaries … we [Europeans] have drawn many lines on that continent, which complicate nation-building," she noted, adding that people need to be more interested in Africa's history and culture — and that even fashion can be something that brings people together.

'Not okay with her leaving'

Whether through discussions on fashion or political debate, finding common ground has always been one of Angela Merkel's strengths as chancellor. For Chimamanda Ngozi Adichie, the post-Merkel era therefore equates with uncertainty: "If she's okay with leaving, I'm not okay with her leaving. I'm worried about what will happen to Europe! I'm worried that Europe will fall apart because she will not be there to hold things together."

The face mask has become a global symbol in the fight against COVID-19. But for fashion designers in Africa, the masks are more than just a protective piece of cloth. Here are some of the best styles from the continent.