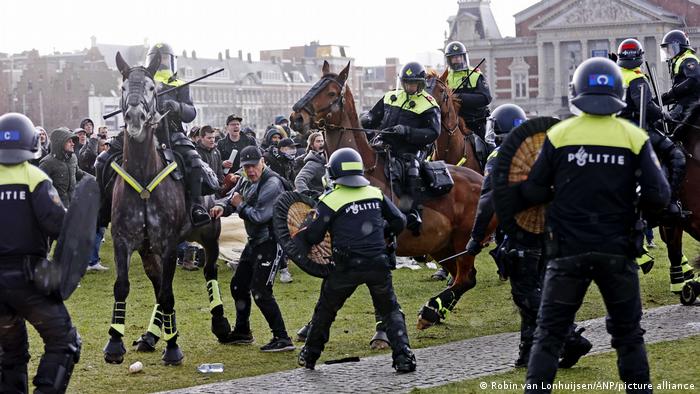 Dutch riot police on Sunday dispersed some 2,000 people holding an unauthorized protest in Amsterdam against a national lockdown to slow the spread of the coronavirus pandemic.

The protesters gathered on Museumplein, a square in front of the Rijksmuseum and Van Gogh Museum art galleries.

Many of them waved banners including "Covid vaccine = poison" and showing opposition to Rutte's government and his coronavirus restrictions.

Most people at the rally ignored social distancing rules and were not wearing masks, which are not mandatory, officials said.

Why did police move in?

Amsterdam city authorities had rejected the protest application and instead demanded it is held in the nearby Westerpark, with a maximum of 500 participants.

The Telegraaf newspaper reported that when many refused to leave and threw fireworks and bricks at police, several water cannons were deployed along with officers on horseback.

"Because of the danger to public health, it is important that everybody sticks to the measures in force. The demonstrators are not doing that,'' the municipality said in a tweet.

Rutte's government resigned on Friday over a child benefits scandal, threatening political instability as the country battles the coronavirus pandemic.

Thousands of parents were wrongly accused of fraudulently claiming child allowance, with many of them forced to pay back large amounts of money and ending up in financial ruin.

The fact that some parents were targeted for investigation because they had dual nationality also underscored long-standing criticisms of systemic racism in the Netherlands.

What are the Dutch COVID restrictions?

The protest took place as ministers in the caretaker government were meeting in The Hague to discuss the possibility of imposing a curfew for the first time since the pandemic began.

The government closed schools and most shops in December to try to stem a surge in COVID-19 cases, and this week extended the lockdown by at least three more weeks.

In the early days of the pandemic, the Netherlands was generally more reluctant than most of its neighbors to impose social restrictions.

But during the second, winter wave it has found its hand forced by the rapid spread of infections and growing pressure on its hospitals.

The Netherlands' largest city has long been a haven for cannabis users around the world. But the mayor did not want the city to become only known as "a place of soft drugs tourism."