The human rights group joins a growing chorus of advocates who have slammed Australia's refugee policy as cruel. Australia admits to the harsh conditions, but says it was deliberately set up as a deterrence. 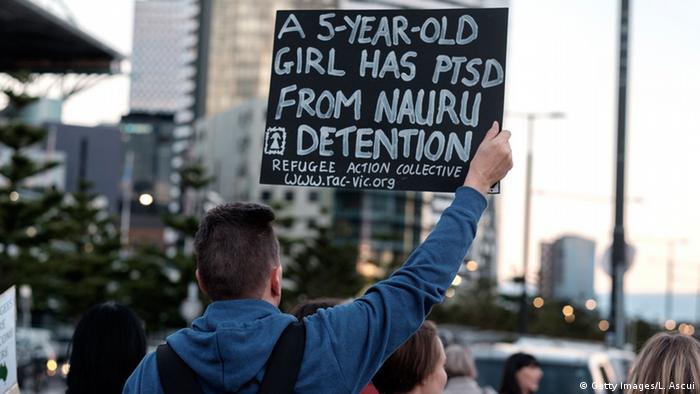 Monday's report also chronicled an "epidemic of self-harm" among the detainees, and pointed to wholesale police failures in responding to reports of violent crimes against asylum seekers, both in the camps and outside.

The Amnesty report chronicles dozens of sexual assaults and physical attacks from more than 1,150 asylum seekers and refugees living among 10,000 local residents on the tiny island of Naura, which lies some 2,500 miles (4,000 km) from Australia.

"According to confidential information provided to Amnesty International in September 2016, in the preceding two years there had not been a single prosecution involving refugees or asylum seekers as complainants in cases of assault, rape and theft," according to the report.

Migrants who navigate the high seas in an effort to reach Australia are often intercepted at sea by Australian forces and diverted to refugee camps on the islands of Naura and Papua New Guinea's Manus. There they are blocked from being resettled in Australia even if found to be refugees.

The plight of the refugees is so dire that even children, some as young as nine, are attempting suicide, according to Anna Keistat, an Amnesty official, who is one of a handful of international observers to have visited Nauru. She spent six days on the tiny island back in August.

"I met children as young as nine who had already tried to kill themselves and were talking openly about ending their lives," Keistat said.

"Their parents were talking about hiding everything, sharp objects, pills, and not allowing them to leave the house, because they were so worried their children would end their lives," Keistat added.

Many refugees come from war torn countries such as Syria and Iraq, but others also come from Africa and parts of Asia. But regardless of their origin, they are told that even if their asylum claims are found to be legitimate, the best they can hope for is resettlement on Nauru or Papua New Guinea.

Some of those interviewed by the human rights group said their time on Nauru was more difficult than the conflicts they had fled in Iraq and Syria.

"I cannot go back. But here I am dying a thousand times," said an Iraqi man, identified only as Edris. "In Iraq, you get just one bullet or a bomb, and it's over, and here I am slowly dying from the pain."

Australia's government has admitted deliberately establishing harsh conditions for would-be asylum seekers in order to deter other refugees from coming.