Building a completely solar-powered town is a challenge, even in very sunny Florida. And not just for technical reasons. Getting average buyers to go green sometimes means having to compromise. 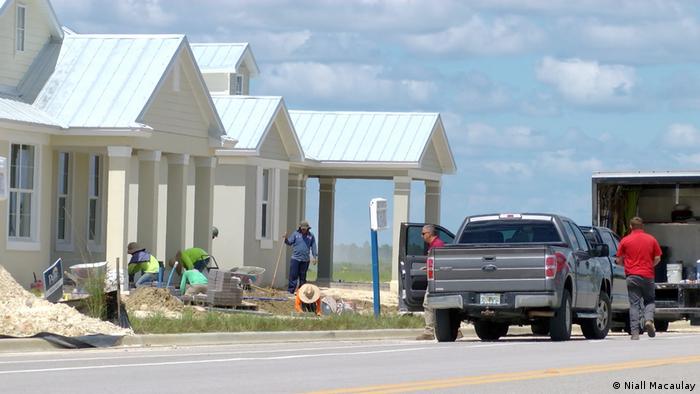 While the architecture looks similar to elsewhere in Florida, the town's homes — built to Florida Green Building Coalition standards — are high-tech and eco-friendly.

The roofs are metal to reduce heating and cooling costs and have extended eaves to create shade. The garages have charging facilities and the gardens are only 30 percent lawn, leaving the rest for less thirsty native plants. "Gray water" reclaimed from the town's on-site treatment plant and rainwater runoff — the streets have no drains or curbs — is used for irrigation and to top up lakes. 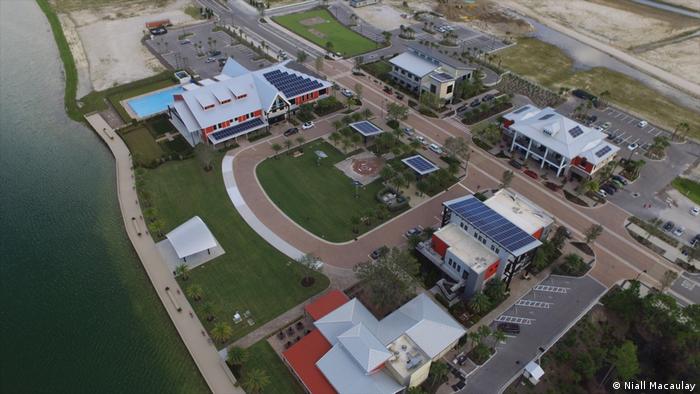 Read more: Bright spot for US solar industry in the 'Sunshine State'

This mix of modern and traditional is partly what cemented Richard and Robin Kinley's decision to move to the new town, located just northeast of the sprawling gated communities, golf courses and strip malls of bustling Fort Myers.

"It is all the tech that is hidden, like the huge solar field down the road and the fact that all of the houses have fiber internet," Richard Kinley told DW. "It was a really nice mix for us, all of the technology for me in an old Florida-style home that Robin appreciates."

The other reason, according to Robin Kinley was to escape the gridlock of Atlanta and to enjoy a cleaner environment, as they embarked on their retirement.

"I kind of like it a little slower paced now," she told DW.

Getting a solar city off the ground

The Kinleys were among the first residents to move to Babcock Ranch in January 2018. The town is being built in stages and as the weeks pass, the street is taking shape around the Kinley's residence as more houses go up. The 18,000-acre site (about 7,200 hectares) should eventually house 50,000 people in 19,500 homes. 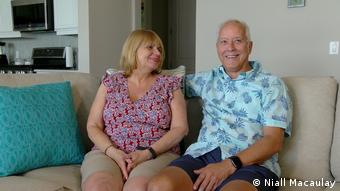 So far, the developers are on track to sell a total of 250 homes by the end of the year. But even to get that far has been difficult, said Syd Kitson, the man behind the project.

The professional American footballer-turned-real estate-developer started thinking about making a sustainable, totally solar-powered town back in 2005.

So Kitson purchased a 91,000-acre ranch in the Sunshine State. And in Florida's largest ever environmental real estate deal, he sold 73,000 acres to the state, which has designated the land as a nature reserve.

"What we didn't realize, this was back eight or nine years ago, is how difficult that would actually be, to convince people that it's the right thing to do," recalled Kitson.

What he had not factored into his vision was how many people might be put off by the $20,000 (€17,500) average price tag on installing home solar panels in Florida.

He needed an idea to kick-start his solar development in a state largely dependent on fossil fuels.

Solar deal with a drawback?

Kitson's solution was to donate 440 acres of ranch land to Florida Power & Light (FPL), a utility company with over 10 million customers. 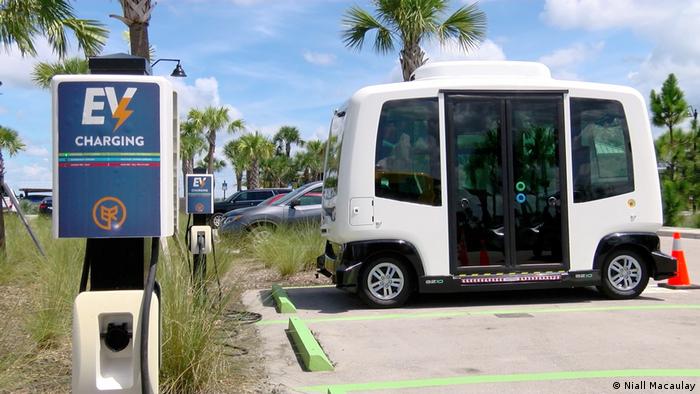 Residents at Babcock Ranch can get around in autonomous vehicles

In return, FPL installed 340,000 solar panels with a generating capacity of 75 megawatts — their largest installation to date. There are plans to double the size of the solar park by early next year, making the town a net producer of solar energy, and, in the longer term, to install battery storage.

The deal means the town runs on energy from the power company's solar farm, so residents don't have to pay up front costs for switching to the renewable energy source. They will, however, have to continue paying standard rates for their electricity.

This could prove to be a drawback down the line, says Jody Finver, the program coordinator for Solar United Neighbors, a nonprofit helping homeowners switch to solar energy.

"I want to see more homes within the community have rooftop solar," said Finver. "With rooftop solar, one of the motivating factors is that your electricity bills would go down, anything you offset by putting more into the grid would bring economic benefit to the homeowners."

Theoretically at least, Babcock Ranch could become more independent of their local solar farm in the future. Every home is structured to enable retrofitting of rooftop solar. Downtown each building already has rooftop solar panels and tree-like solar structures dot the parks and malls.

Even if his formula isn't cutting edge from a global perspective, for Kitson it made sense to partner with a power company with deep pockets in order to strike the right note with American buyers.

Not just for retirees

Kitson hopes those buyers will be of all ages — something he recognizes as central to creating a vibrant town.

"When most people think of Florida, they think retirees. They say, 'wow, that is a great place to go and retire.' Well, guess what, there are a lot of young people living here too," Kitson said.

To get the right mix of ages, the developers have created recreational facilities with swimming pools, nature trails and lakes for fishing and boating. They've also got exercise machines that generate power when they're used. 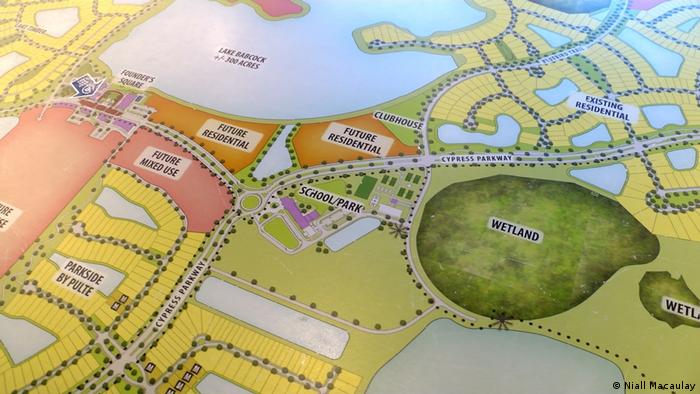 Babcock Ranch has lakes, nature trails and green spaces, largely dedicated to native plants. Schools there have a green curriculum too, say its developers

Residents can also use an app to arrange local transport in autonomous vehicles and electric buses will soon transport students to the town's schools.

For those already living in Babcock Ranch, like Richard Kinley, it's a way to take some responsibility for the environment.

"As I've aged, I've gotten more and more conscious of sustainable living," he said.  "So, the way I describe it is as guilt-free as I can imagine. Just the fact that I have an electric car that I am literally driving on solar power."

This summer was the "cleanest ever" in terms of the UK's energy consumption. That's more good news for British supporters of renewable energy on the day the country's first subsidy-free solar farm opens. (26.09.2017)

Investment in renewable energy continues to grow at a record pace as countries look to move away from fossil fuel-based power production to eco-friendly generation. Over half of world's new solar capacity is in China. (05.04.2018)

A former prison inmate and gang member is among hundreds in Los Angeles to find a place in the sun - and a second chance - via a solar industry re-entry program. (05.09.2017)