Russians have voted for regional lawmakers as well as in a number of by-elections for national MPs. Poisoned opposition leader Navalny's team had urged voters to back the strongest candidates against the ruling party. 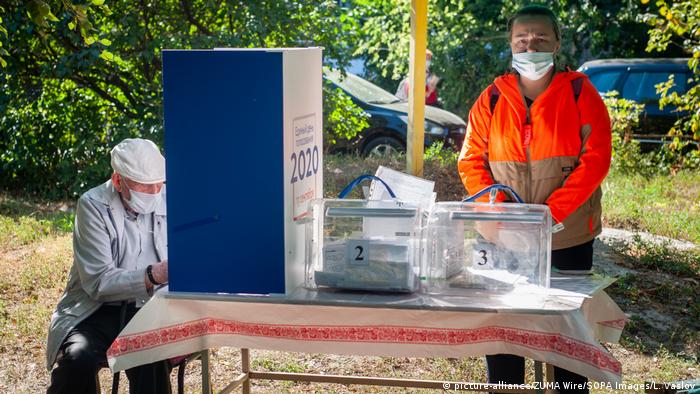 The ruling United Russia party was set for victory in a number of local election seats on Sunday, but was also on course for some setbacks as Kremlin critic Alexei Navalny's supporters made rare gains in Siberia.

Voting for local elections took place in dozens of Russia's 85 regions as voters cast their ballots to elect regional governors and lawmakers in city legislatures. Several by-elections for national MPs were also held on Sunday.

Read more: Russia: Opposition in Novosibirsk joins forces to take on the Kremlin

The poll was seen as a litmus test for next year's Duma elections, both for the Kremlin and the opposition.

Navalny's team had urged Russians to vote tactically by supporting the strongest candidates against the ruling party United Russia.

DW correspondent Juri Rescheto explained that this "smart voting" – choosing only those candidates that were not aligned with Putin – appeared to have played a role.

"The main goal of this so-called smart voting was to push United Russia out of the city councils for example in Siberia in the city of Novosibirsk where the Putin party had a majority. Navalny's idea was basically that citizens should vote for all possible parties except, of course, United Russia. And this actually worked in Novosibirsk."

The politician is currently being treated in Berlin after being brought out of an artificial coma.

Some of the highest-profile campaigns took place in Novosibirsk, Russia's third-largest city, and neighboring Tomsk where Navalny traveled last month.

On Sunday night, his team said that the heads of Navalny's offices for Novosibirsk and Tomsk both secured city council seats.

Navalny had been in Siberia to promote his "smart voting" campaign when he was poisoned with what Germany says was a Novichok nerve agent.

Ksenia Fadeyeva, the 28-year-old head of Navalny's Tomsk office, said she won a city council seat along with another Navalny ally.

"This is the first victory of a Navalny office head," Ivan Zhdanov, director of the opposition politician's Anti-Corruption Foundation, said on Twitter.

"It was in Tomsk where Navalny was poisoned."

To counter United Russia and the Communist Party, Boiko formed an opposition alliance, which fielded around 30 candidates for the city legislature.

Ruling party on course to victory

According to initial results, a second-round runoff was not expected in any of 18 regions that elected governors.

Official results are expected on Monday.

Several regions registered large turnouts in two days of early voting, with more than 50% of the electorate casting ballots early in the far eastern Jewish Autonomous Region and in Tatarstan.

Russian opposition leader Alexei Navalny was convicted of fraud and contempt of court and will be sent to a maximum security penal colony. His supporters decry the charges as politically motivated.