Albania has been hit by a powerful nighttime earthquake that has killed at least 25 people and injured hundreds more. Hours later, another quake rattled Bosnia. Authorities said rescue work was "extremely difficult." 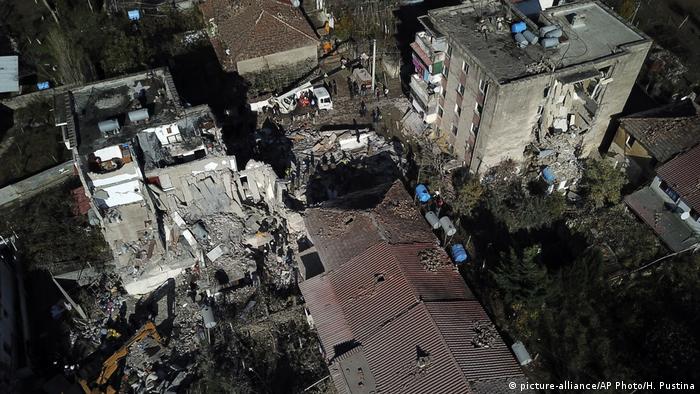 A 6.4 magnitude earthquake hit Albania early on Tuesday morning, causing several buildings to collapse. The official death toll reached 25 by Tuesday evening, while the fate of many others remains unknown.

At least another 600 people were injured in the strongest earthquake to hit the Balkan nation in decades. The epicenter was 10 kilometers (6 miles) northwest of Shijak, between Durres and the capital, Tirana, at a shallow depth of 10 kilometers, according to the US Geological Survey.

A man in his 50s was killed while jumping out of a building during the tremor, according to officials. Others were killed in building collapses in the coastal city of Durres and in Thumane. One of those killed was an elderly woman who saved her grandson by protecting him with her body, emergency workers told local media.

The Albanian government declared Wednesday a national day of mourning for the victims. Neighboring Kosovo, which has a large Albanian population, will also recognize Wednesday as a mourning day.

'The walls were creaking'

Tirana-based Fabio Hasani said the quake lasted for about a minute.

"I woke up, confused, feeling my bed moving. Then I realized that everything was moving and shaking, the walls were creaking," he told the DPA news agency.

Thumane resident Marjana Gjoka was also asleep in her apartment on the fourth floor of a five-story residential building when the quake struck. Four other people, including her young niece, were in the apartment.

"The roof collapsed on our head and I don't know how we escaped. God helped us," the 48-year-old Gjoka told the Reuters news agency.

Hours later, a magnitude 5.2 quake shook parts of southern Bosnia, around 75 kilometers (45 miles) south the capital, Sarajevo, according to the European-Mediterranean Seismological Centre.

There were no immediate reports of injuries or structural damage.

Rescue crews in Albania used excavators to search collapsed buildings for survivors. Local television broadcast footage of rescuers pulling a young boy from a collapsed building after an excavator moved a broken slab of concrete and people pulled mangled reinforcement bars out of the way. It was not immediately clear how many people were still under the rubble.

As of Tuesday night, non-stop rescue efforts have managed to retrieve more than 40 people. Defense Minister Olta Xhacka said that search and rescue work was continuing, but described it as "extremely difficult."

The rescue teams "have to work slowly because there is a high risk of further collapse, endangering not only residents but also those trapped, and the rescuers themselves," he said in a televised statement.

President Ilir Meta told journalists that "the situation is very dramatic. All efforts are being done to take the people out of the ruins.'' He called on the Cabinet to request international assistance.

Neighboring Kosovo was sending an emergency team to help with rescue efforts, while the European Union and the United States both offered immediate support.

The EU said it had activated its Civil Protection Mechanism at the request of the Albanian authorities. While Albania is not an EU member, the mechanism allows Brussels to respond to emergencies outside EU borders.

The bloc engaged its Copernicus satellite monitoring system to deliver images of the area and mobilized three search and rescue teams, according to EU Humanitarian Commissioner Christos Stylianides.

"The European Union stands by Albania at this difficult time," the commissioner said in a statement.

About 400 Albanian soldiers were erecting tents in two towns to shelter people with damaged houses.

Tuesday's quake was the second to hit the country in two months and was felt along the Adriatic coast.

One unidentified man told local television that his daughter and niece were trapped in the rubble of an apartment building. 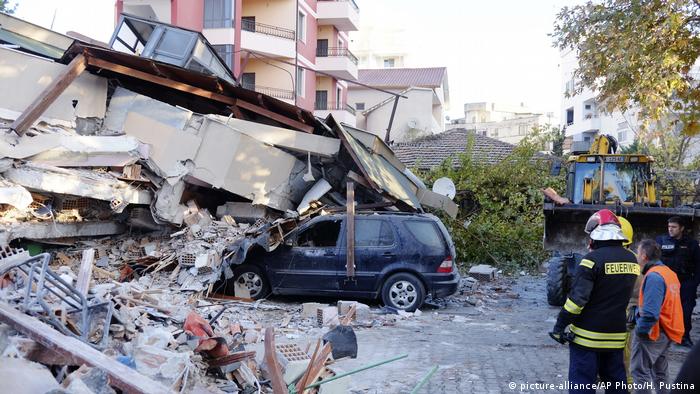 Leaders called for calm after the quake, saying emergency crews were working to rescue trapped residents

National police warned people in affected areas to avoid driving so emergency services could reach victims, but also to stay out of buildings for fear of further collapses in aftershocks.

Three hours after the initial tremor, a strong aftershock was felt in Tirana.

Prime Minister Edi Rama said all government agencies were "intensively working to save lives at the fatal spots in Durres and Thumane."

"It is a dramatic moment where we should preserve calmness, stay alongside each other to cope with this shock,'' Rama wrote on his Facebook page.

A 5.6 magnitude earthquake had hit Albania, one of the poorest countries in Europe, in September, damaging about 500 houses and destroying others.

The latest quake was reportedly also felt in the southern Italian regions of Puglia and Basilicata.

In 1979, the region was hit by a magnitude 6.9 earthquake, causing damage along the southern Adriatic coast of what was then Yugoslavia. There was widespread damage to buildings and more than 100 people died, but the biggest impact was felt in modern-day Montenegro.