The Berlin-based Chinese artist is suing Volkswagen in Denmark for an ad that shows one of his installations made of discarded life jackets used by migrants. 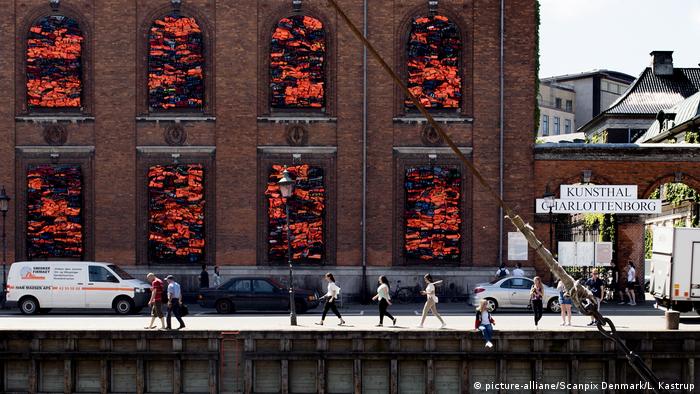 Artist Ai Weiwei is taking Volkswagen / Skandinavisk Motor Co. to court for copyright infringement, as the company published a magazine advertisement for the car VW Polo in 2017 that featured one of his art installations as a backdrop. The trial started in Copenhagen on Wednesday.

According to Ai, the image was used without the artist's or the museum's knowledge or permission. "These actions are clear violations of my intellectual property and moral rights, but more importantly they raise larger questions of corporate power and responsibility in our era of global capitalism," Ai wrote in an opinion piece published by The Guardian and on his Instagram account.

Titled "Soleil Levant," the installation seen in the ad was created for World Refugee Day in 2017. The work comprises more than 3,500 life jackets that were worn by migrants on their perilous sea journey to reach Europe. The work was exhibited on the facade of the Kunsthal Charlottenborg museum in Copenhagen from June 20 to October 1, 2017.

The ad shows an orange car in front of the brick wall of the museum with the bright orange vests as a backdrop, without any reference to the work or its meaning, as this Instagram post by Ai Weiwei shows. 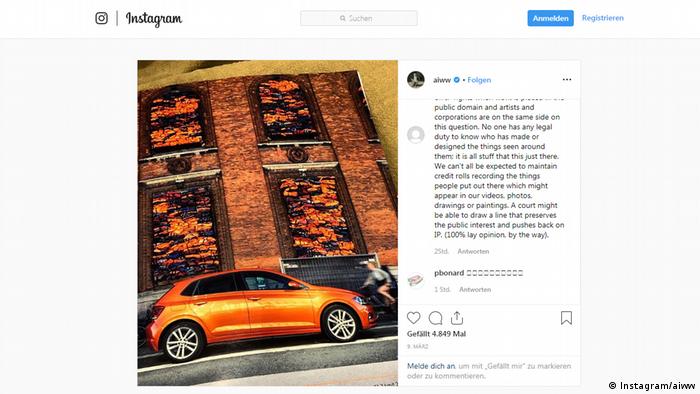 The activist and artist has been dealing with the current refugee situation in his recent artworks and films. In his comment about the lawsuit, he refers to the fact that he arrived in Berlin in 2015, the same year that a great number of refugees arrived in Europe and were welcomed in Germany, which led him to focus his work on the issue.

"It is against this backdrop that I learned that my artwork about refugees had been used contemptuously and irresponsibly to advertise cars for Volkswagen, one of Europe's largest corporations and a pillar of German enterprise. My surprise soon turned to anger," Ai wrote.

The artist also mentions in his piece that he spent more than a year trying to solve the case "amicably" outside of court before deciding to proceed with a lawsuit. He aims to draw attention to the fact that the company is setting up new factories in states where human rights are violated, such as China.

During the first day of the court case, the photographer of the image and head of press at VW Denmark, Thomas Hjortshoj, took the stand and claimed he didn't realize that the backdrop of his photo was a museum and that it featured an installation of life jackets. He said he didn't notice the life jackets "because they were stacked into the facade and they were in a rush" when the picture was taken. He also said in court that he didn't wonder what was on the facade.

The artist is documenting every step of the court case through social media channels including Twitter and Instagram.

Ai Weiwei: 'Refugee crisis is a political tool for populists'

In an interview with DW, China's dissident artist Ai Weiwei has said that some groups are trying to incite hatred against immigrants in Germany and Europe, and that the world needs to rethink the idea of humanity. (25.12.2018)

Producers of the film 'Berlin, I Love You' have cited Chinese influence as the reason they cut Ai Weiwei's segment. The artist told DW that the Berlin International Film Festival suggested his section be removed. (18.02.2019)