Hi-tech systems are in demand to help grow high-performance crops. Researchers are using sensors to match the crops to different soils and weather conditions. 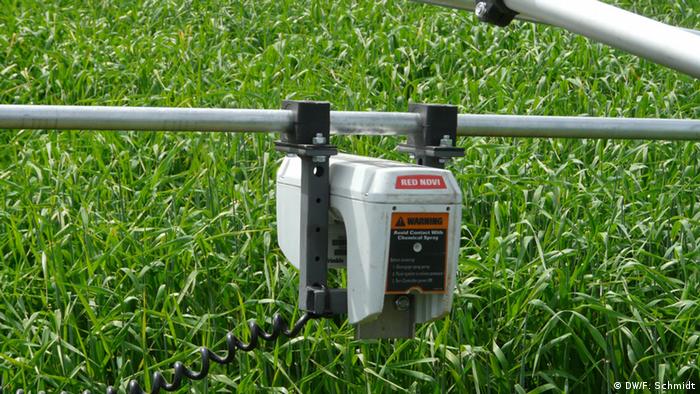 Crop breeders, researchers and representatives from universities and industry are discussing new and improved ways of breeding resistant and highly productive lines at the CROP.SENSe.net Symposium in Bonn (September 29th - October 1st, 2014)

Harvests will have to expand in order to feed a growing world population over the next decades. To achieve the goal without expanding cultivated areas at the expense of the environment, agricultural economists largely agree that farmers will have to turn to intensive cultivation and more productive plants.

But first, it's a task for breeders and researchers.

There is a growing focus these days on technical support: genetic sequencing identifies a plant's genetic characteristics, which are then compared to the plant's growth pattern on the field under certain soil and climatic conditions.

This is called phenotyping.

Ideally, the procedure comes up with plants that yield good harvests even after periods of frost or draught.

Scientists at the University of Bonn have set up an experimental outdoor lab at their Klein Altendorf Campus.

A student holding a laptop connected to a box with a revolving laser scanner perches on a tractor with a lifting ramp, hovering over a barley field. The scanner stores a three-dimensional picture of the field.

"The first time we come out is before the plants begin to grow, and we make a high-definition digital ground model of the field's surface," says Nora Tilli, a geographer at the University of Cologne. "Once the plants start to grow, we come out every other week to measure the plants, and we get their height in a resolution of one centimeter." 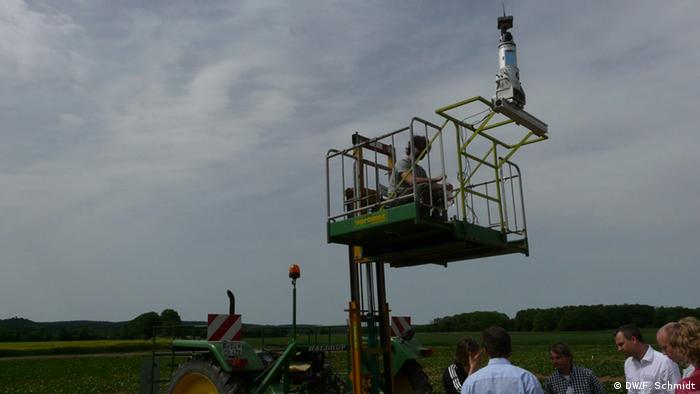 Three-dimensional images show the plants' growth. The researchers deduct the plant's biomass from its height and take random manual readings to check the results. They can then tell how much the plant grew in different sectors of the field.

A plant's growth rate in a particular sector, however, is just one of the many significant details researchers need to judge which strains are successful. The soil properties in a single field can be quite irregular, and that can influence the levels of moisture and nutrients the plant has at its disposal.

Heiner Goldbach, an agricultural scientists at the University of Bonn, points out a typical problem: fields are not uniform. This simple fact often leads in a cultivator saying that a certain strain of plant looks better than another, when it may be the result of different soil properties.

"The cultivator needs more information about the site," Goldbach says.

Pätzold uses a gamma-ray-sensor to look into the soil. The sensor recognizes natural radioactivity that is emitted by isotopes like potassium 40.

"We can say a lot about the distribution of these elements in the soil by using the gamma-spectrometer," Pätzold says. The data are then used in conventional soil analyses to gather information about the level of clay or sand in the soil. 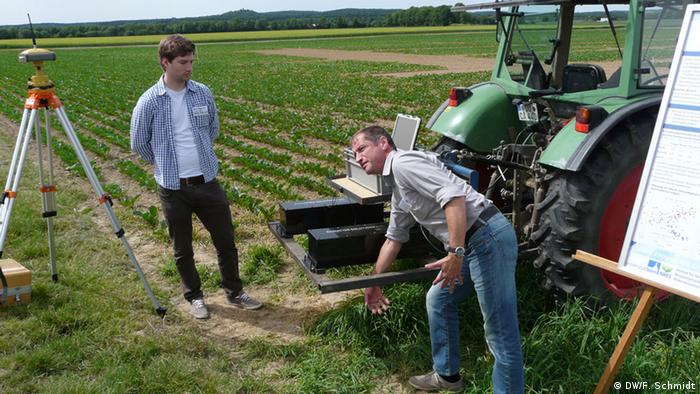 This knowledge is especially important for winemakers.

"For cultivating vines, it's extremely important to detect even small heterogeneities," says Tobias Hegemann of the University of Bonn. "Different kinds of vines need different things from the soil."

The ground they grow in can even change the taste of the wine. And some vines can only grow in very particular kinds of soil.

One of the biggest problems for cultivators is parasites.

Hair worms, or nematodes, are parasites that attack the roots of sugar beets. To find them, you would usually have to pluck the sugar beet from the ground.

But Bonn University's Birgit Fricke lets the beet grow. She finds the parasites with the help of a spectral sensor that measures light waves.

"Most of the sunlight hitting the plant is reflected immediately," Fricke explains. "But part of the light goes into the leaf, transmitted by the photosynthesis apparatus and is then reflected back."

A plant's reflection signal varies, depending on how much stress it is under. If a sugar beet suffers from parasite infestation, it reflects light differently than a healthy plant.

This is how researchers are able to detect and infestation early, without harming the sugar beet - it's a non-invasive procedure.

Spectral sensors can also be used to learn about a plant's growth in soils with different levels of nutrients.

Since there are many different sets of information that can be gathered by using light, it makes sense to use more than one sensor at a time. 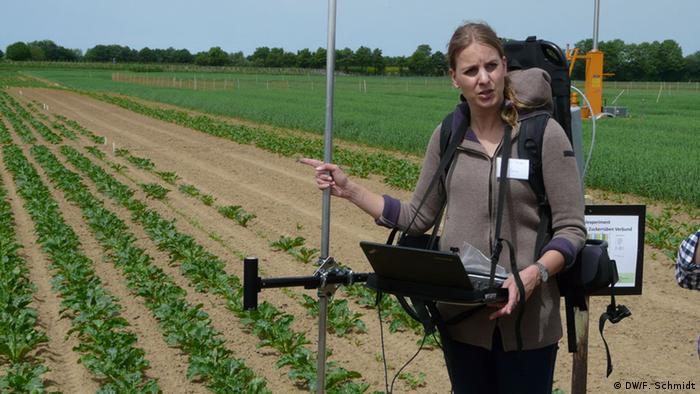 Birgit Fricke with a spectral sensor

Franz-Ferdinand Gröblinghoff of South-Westphalia's Technical College has developed a sensor cart that holds two different reflection sensors. He and his colleagues feed the data from the sensors into software that enables them to use the information quickly.

Gröblinghoff later compares his data to that measured by the wheat harvester.

"The amount of grain is weighed by a sensor on the harvester," he says. "That's also how we get information about moisture and other factors."

By using the sensors, researchers can paint a detailed picture: information on best treatment, species, fertilizing, soil and much more is collected in one database. A cultivator without these technological possibilities would quickly lose track of all the different factors.

"A cultivator gets tired," researcher Heiner Goldbach says. "After two hours on the field, in the heat, he's more likely to make mistakes. And the cultivators themselves are aware that the later the day, the higher the danger for them to use unfit grains or accidentally discard good ones."

The researchers believe that their sensors, meanwhile, will run smoothly all day long and deliver objective results.

The European Union has dethroned the United States as the world's top agri-food products exporter. In 2013, the 28-nation club sold food and agricultural products worth some 120 billion euros. (23.06.2014)

Indian Alphonso mangos, with their buttery texture and sweet taste, are the most sought-after variety. But an EU import ban will make for a less sweet summer - for European mango consumers, and Indian exporters. (06.06.2014)

As global demand for medicinal remedies intensifies, Indian experts say many endemic species of wild medicinal plants from the Himalayas are being over-farmed. Some of the affected plants may never grow back they say. (06.05.2014)