Humanitarian groups want all relevant political players to be part of discussions on Syria's future and aid drives. But after Russia is snubbed at a donor conference, will Syrians pay the price? At this year's donor conference for Syria, many in the international community highlighted the urgent need to continue supporting Syrians

As Russia's war in Ukraine rages on, the EU hosted the sixth international donor conference for war-ravaged Syria, with the bloc's foreign policy chief Josep Borrell warning that Syria should not be forgotten.

"Now it is Ukraine in the headlines. But don't give up on Syria," he said, highlighting how 11 years of war in the country has destroyed the lives of the people of Syria and resulted in 90% of Syrians continuing to live in poverty.

"The Russian war will increase food and energy prices and the situation in Syria will become worse,'' he added.

The Russian Federation — a key player in the conflict in Syria — was not invited to the conference.

"The EU has invited partners who have a genuine interest in contributing to world peace. Russia has proven not to have this, with its illegal invasion of Ukraine," Dan Stoenescu, head of the EU Delegation to Syria, told DW.

Russia has been a strong ally of Syrian President Bashar Assad since 2011, when the conflict began, and continues to support the Syrian regime's military operations. While Moscow has repeatedly said that its actions target only terrorist activities in Syria, the UN has accused Russia of its direct involvement in bombing civilian areas and committing war crimes together with the Syrian regime.

The EU's foreign policy chief stressed that Tuesday's donor event is for both Russia and the Syrian regime to understand that all countries participating in this conference will not relax sanctions nor normalize relations until there are "credible commitments for political reforms" in Syria.

Humanitarian organizations fear that Russia's isolation from the donor conference could be detrimental to humanitarian aid efforts, especially in northwestern Syria.

At a US House of Representatives subcommittee meeting in March this year, humanitarian aid advocates highlighted how Russia could close Syria's last UN-mandated humanitarian aid channel, in retaliation to tense situations with the West over the war in Ukraine.

The UN Security Council had administered four cross-border humanitarian aid channels into Syria in 2014. However, Russia and China used their UN veto powers to discontinue three of these channels. Moscow has always argued that humanitarian aid which does not pass through the Syrian regime's channels should be discontinued.

Currently, only one UN-mandated cross-border humanitarian aid channel — the Bab al-Hawa crossing in northwest Syria, has been allowed to remain open until July 2022, after Russia made a compromise in the UN Security Council last year.

This crossing in the Idlib region of Syria is controlled by Syrian rebel factions and the jihadi alliance Hayat Tahrir al-Sham. Some 4 million people live in this region and more than 2.6 million are internally displaced Syrians who are dependent on humanitarian aid delivered by the UN and UN-backed NGOs through Turkey.

Juliette Touma, regional chief of advocacy for UNICEF in the Middle East, told DW that the renewal of this border crossing, to deliver humanitarian aid via Turkey, is a lifeline for nearly 1 million children who live in the northwest of Syria and who rely (almost exclusively) on cross-border assistance.

"What is key for UNICEF is to be able to reach every child in need wherever they are, regardless of who controls the region," she added.

Amid fears of Moscow closing this crossing post in July, the international humanitarian NGO Human Appeal also highlighted that there is no "secure" alternative aid in Syria's northwest.

"There is currently no feasible alternative to humanitarian aid reaching the millions of vulnerable people in Northwest Syria. The existing cross-border model can be trusted by both donors and beneficiaries. If this model is not renewed in July that will leave millions of Syrian civilians with no secure aid corridor alternative," Raya Homsi, institutional funding manager at Human Appeal, said in a statement.

However, the EU's foreign policy chief was optimistic — and said Russia would not consider halting the aid crossing since it would put more than 1 million people's lives in a dire situation. "I think Russia will not do it. They should not do it," he told reporters in Brussels.

Stoenescu, the head of the EU Delegation to Syria, also told DW: "The EU will continue advocating for humanitarian exemptions, opening and de-politicization of cross border operations."

Meanwhile, Linda Thomas-Greenfield, the US ambassador to the UN, said she discussed with the deputy foreign minister of Turkey ways to move forward with the cross-border resolution in Idlib. She also added that she plans to focus the UN Security Council's attention on getting a resolution passed before July 10.

"Millions of Syrians are dependent on this cross-border aid and, while we have supported cross-line aid coming from Syrian regime-controlled areas, that is not going to be sufficient to provide for the broader needs of the Syrian people it complements," she told reporters in Brussels Tuesday. 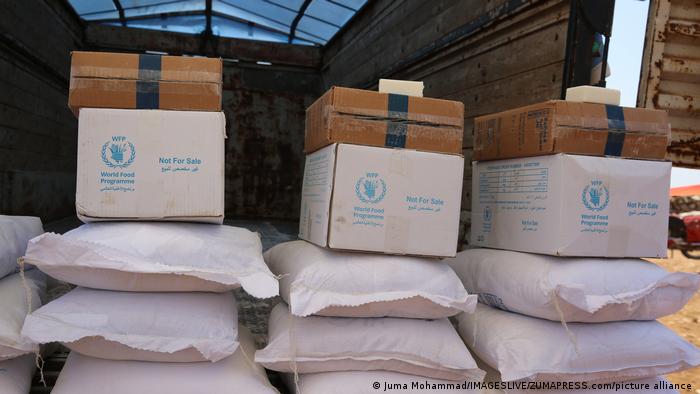 Humanitarian aid reaches a rebel-held area in northwest Syria through the Bab al-Hawa border crossing, which the UN Security Council approved in 2014, three years after the start of the Syrian conflict

Aside from addressing concerns about humanitarian aid channels and pledging their financial commitment to support Syria, Imran Riza, the UN's resident coordinator and humanitarian coordinator for Syria, highlighted that countries should balance lifesaving assistance with early recovery and resilience programs to help the people of Syria.

"We should be trying to help people produce their own food to be less dependent on assistance and help them attain a bit more control over their own lives and thus dignity," he told DW.

"The main thing that we keep hearing from people is that they need jobs, livelihoods to sustain themselves and take care of their families. So assistance should focus on empowering local communities."

"In a sense, it's a win-win because such recovery assistance is the only thing that will also reduce the trend of increasing humanitarian needs and costs while responding to the stated priorities of affected Syrians," he added.