Afro-German politicians are pushing for change

In January, unknown assailants shot at the office of Senegalese-born German politician Karamba Diaby. Germany was shocked, but Afro-German politicians are otherwise rarely in the spotlight. 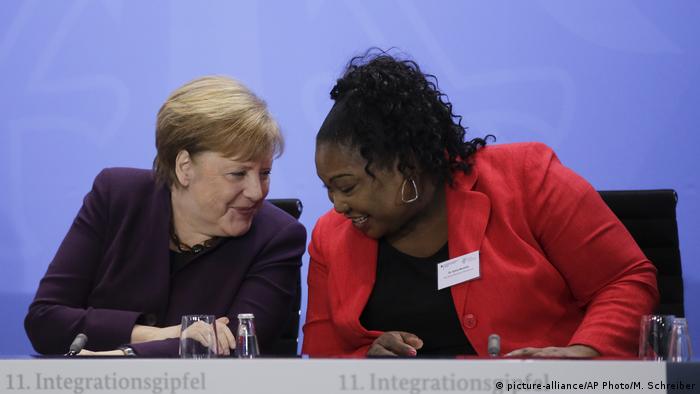 Pierrette Herzberger-Fofana is used to being the first. The first Afro-German city councilor. The first Afro-German member of the European Parliament. She was born in Mali, grew up in Senegal and came to Germany to study for her doctorate degree. She worked as a teacher and lecturer at the university in Erlangen and entered politics 20 years ago. But not everyone was supportive of her chosen career path.

"Back then, there were people who were enthusiastic, but most were very skeptical," Herzberger-Fofana told DW. But her decision paid off. She was elected to the European Parliament a year ago — at the age of 70. Many other people her age take a step back from their careers to focus more on family or traveling the world. But Herzberger-Fofana wants to fight for the issues that are close to her heart: education, development and bringing an end to female genital mutilation (FGM).

These issues are well received by her voters, she says. Especially among the young people. "The current generation is different from 20 years ago," she explains. "They accept a lot of things that were considered strange at that time."

However, she's aware that Afro-German politicians aren't considered the norm. "If someone comes to me and asks me three times, 'Are you a German politician?' then the person is insisting on [another answer]," she says. "If someone asks where we come from and how long we've been here — these are the kinds of things we experience as politicians, as well as citizens who have a different origin." 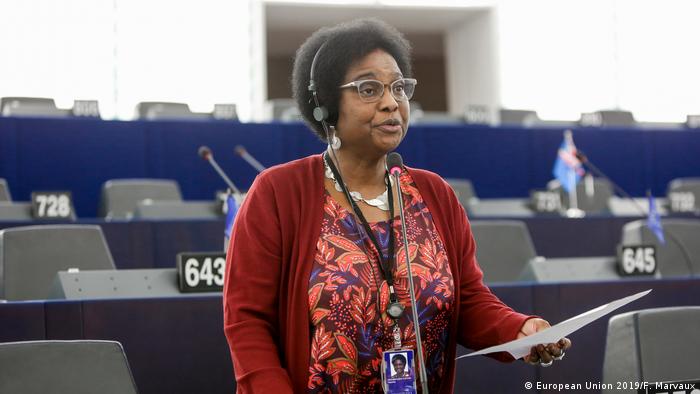 There are currently five black women in the European Parliament. "Five women for 500 million European citizens," Herzberger-Fofana says. More than 1 million people of African origin live in Germany, but very few of them are in political office.

Aminata Touré is one of the most well-known Afro-German politicians. She was elected to the state parliament of Schleswig-Holstein in 2019 at the age of 26 as a representative of the Greens party, becoming the youngest state deputy speaker in German history.

In the current parliamentary term, the Social Democratic (SPD) MP Karamba Diaby is the only Afro-German among the 709 members of the Bundestag. "I don't want to be famous for being black," he once told Die Zeit. But he is still rarely asked about education policy – his area of expertise.

Racism a part of everyday life

In January, strangers opened fire on Diaby's office in the eastern city of Halle. His fellow politicians expressed their shock and outrage at the attack: Chancellor Angela Merkel, President Frank-Walter Steinmeier and numerous other MPs made it clear that they stood behind Diaby. But insults and threats from the right-wing are part of everyday life for the 58-year-old politician, who was born in Senegal and came to former East Germany to study chemistry.

Diaby reacted remarkably calmly to the attacks and thanked his supporters for their many good wishes. "We are not living in an age of anger, but one of solidarity and compassion," he said in a speech to the Bundestag. 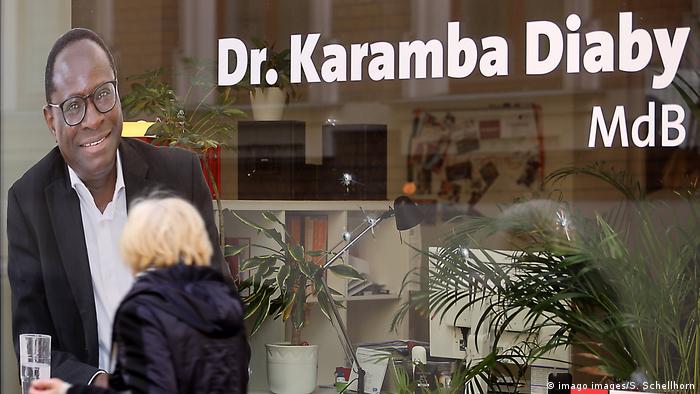 Sylvie Nantcha has also had to deal with multiple threats during her political career. In 2009, she was elected to the municipal council in the southern city of Freiburg, making her the first African-born CDU councilor in Germany.

"I decided that our society may be diverse, but this diversity is not reflected in our parliaments and committees," she told DW. "I am a person who likes to get things moving and I saw this political commitment as an opportunity to shape our future."

'It was absolutely amazing'

Nantcha was born in Cameroon and came to Germany at the age of 17 to study. After earning her degree, she worked at the university, started a family and founded a consulting company with her husband. In 2009, she became a member of the CDU regional board in Baden-Württemberg — becoming the first African-born woman to hold such a position in Germany.

"How the population was able to reach that point was absolutely amazing," she recalls today. "A friend of mine told me to search my name on Google — there were 89,000 results!" 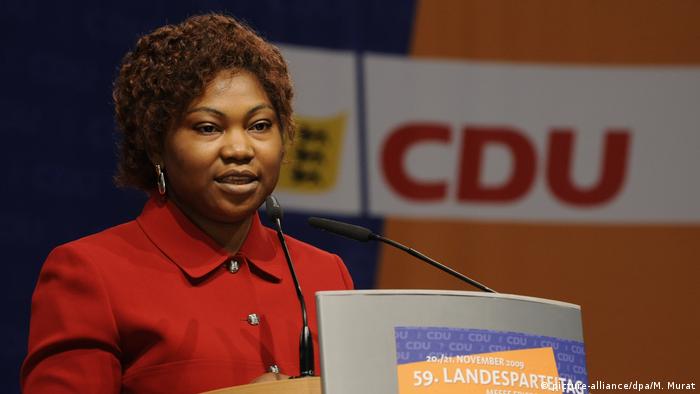 After 10 years in the Freiburg municipal council, Nantcha decided not to stand again for the position. She is now fighting for the issues which matter most to her as the chairwoman of the African Network of Germany (TANG), which claims to represent around 800 African-German organizations. She advises the federal government on issues concerning migration and works to support the Afro-German community.

"I am very happy and proud of my home country Germany that I have the opportunity to use my history, my experience and my knowledge to advance these topics," she says.

But she also knows how ugly things can get: "Our society has a problem: racism," she said at the federal government's integration summit in March. Chancellor Merkel was sitting next to her at the time (top photo). When Nantcha was first elected to the CDU state executive committee in 2009, she was bombarded with threatening letters, hate mail and even death threats.

"I was afraid, especially for my children," she says. For a time they were no longer allowed to play outside and her family moved to a new address that was kept secret. 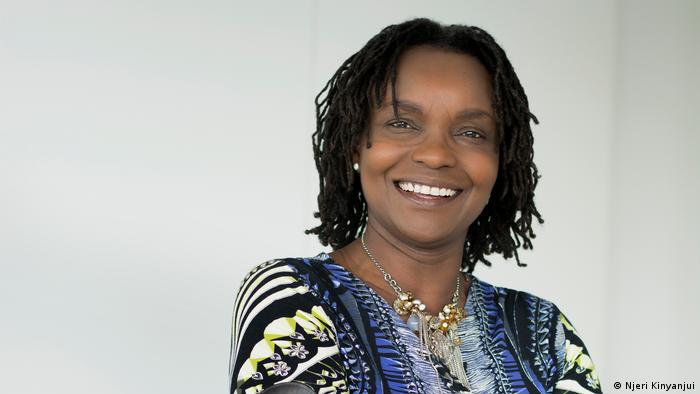 'Many migrants are afraid to go into politics'

Njeri Kiyanjui is probably the only German city councilor to have been interviewed on Kenyan TV during prime time. Kiyanjui came to Germany in 1983 when she was 20 years old. She studied economics in Berlin and the southern city of Tübingen. But after she graduated, she struggled to find a job. So she went freelance. She now sells homemade chutneys, spreads and jams through her company, Hottpott-Saucesmanufaktur.

She has also been a member of the Reutlingen city council representing the Greens since 2014 as the first councilor to have been born outside of Europe. She sits on the Integration Council and the Committee on Economic and Financial Affairs.

"I have a lot of skills," she told DW. "I am perceived as someone who is not only here for integration purposes, but who can have a say in lots of different areas. After all, I am an entrepreneur, so I see a lot of things differently."

But as an Afro-German, does she have a different view of local politics? "I've been living here for a long time," she laughs. "I don't get up in the morning and think 'Oh, I'm African. How am I going to be perceived?' I have my own agenda in my head, what I want to change."

She has one big wish for the future of politics in Germany: "Many migrants are afraid to go into politics. I hope that they become more politically involved. Politics in Germany affect every stage of life for everyone who lives here. From the cradle to the grave."

Florence Kasumba has acted in blockbusters including "The Avengers" and "Black Panther." As she picks up the lead as a detective in "Tatort," we revisit 10 things you need to know about Germany's longest-running TV show. (06.07.2018)