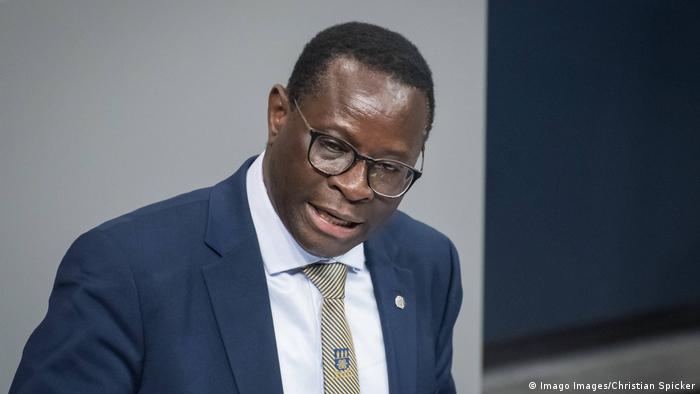 "On Wednesday morning, bullet holes were noticed at my constituency office. An office window with my likeness on it has several bullet holes. The police and security services are investigating," Diaby wrote, sharing a photo that showed three holes in fairly close proximity.

Police said they had launched an investigation based on possible charges of criminal damage. They said that several buildings had been targeted in the night, and that it wasn't yet clear what type of weapon was used.

"Projectiles were not discovered. The police cannot yet say exactly what caused these damages," police said. The special arm of the police dedicated to politically motivated crimes, the Polizeilicher Staatsschutz, said that it was investigating the case and that it could not yet comment on whether the building had been specifically targeted.

'The tone has become more raw'

Speaking to DW's Michaela Küfner in the Bundestag on Thursday, on the sidelines of a debate on organ donation during which TV cameras showed Chancellor Angela Merkel taking time out from the debate to speak to Diaby at length, the 58-year-old said he would not allow himself to be intimidated.

"Sadly it's been the case more often in recent years that some people try to express their opinions in the form of violence. It's the second time I've had to deal with an attack on my constituency office. It's very sad and leaves me aghast," Diaby said. "I won't be intimidated. We will continue to do our work. But I am convinced that we need to have a serious discussion about the kind of society we want to live in. We can't just accept that a small minority tries to intimidate people with gun violence and similar acts. This needs to be taken seriously throughout society."

Born in Senegal, Diaby moved to Germany as a student in the 1980s. He is currently the only African-born member of the federal Bundestag parliament. He has faced abuse from the public in the past, even litigating over racist Facebook posts in the run-up to the 2017 general election. However, Diaby said on Thursday that "the climate has changed dramatically in the past two years — the tone has become more raw."

Foreign Minister Heiko Maas, also a Social Democrat ally of Diaby's, called the image, "Simply unbelievable. Disgusting and cowardly." He pledged his full support to Diaby and the lawmaker's team.

"We will continue to work for a free, tolerant and diverse democracy. Now more than ever!" Maas said.

Several other retired or current politicians from other parties — including Ruprecht Polenz and Matthias Hauer (Christian Democrats) and Sven Kindler (Greens) — also posted messages of solidarity. The socialist Left party responded from its party account, saying "Don't be intimidated by Nazi-terror."

Saskia Esken, one of the SPD's new leadership duo, said, "I am truly shocked by the lengths cowardly criminals will go to to intimidate those who think differently."

Halle an der Saale is in the state of Saxony-Anhalt in the former East, just to the west of Leipzig.