Income inequality was reversed among a group of Africans migrating to Europe, according to a new UN study. Although much higher earnings are a factor, intolerance at home often cements the decision. 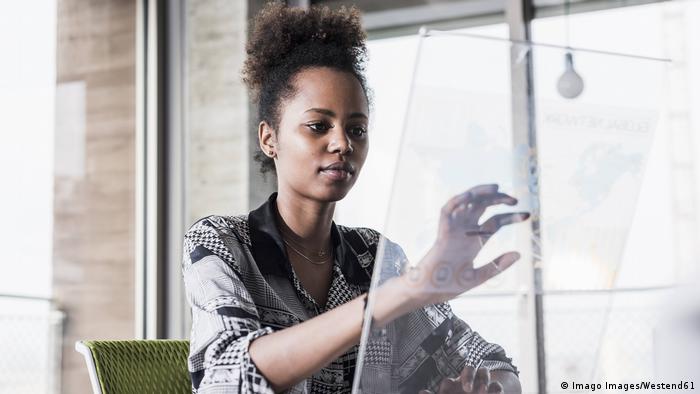 A group of African women interviewed for a new United Nations Development Program (UNDP) study published on Monday, earn, on average, 11% more than African men after migrating to Europe.

The report, which interviewed 1,970 migrants from 39 African countries, including Nigeria, Senegal, Mali, Guinea, and Ivory Coast, showed the gender wage gap has resoundingly reversed in Europe, for those migrants at least. In Africa, the women surveyed earned 26% less than men.

The migrants questioned were living in 13 European nations, including Germany, Spain, Italy, Belgium and France, and had arrived through irregular means. Some 91% of them said they had arrived by sea.

The report "Scaling Fences: Voices of Irregular African Migrants to Europe" reveals that 93% of those interviewed experienced danger on their journey, but only 2% said they would have stayed at home if they had known of the risks.

Africans risk their lives to make it to Europe

Not just about money

Getting a job, and the chance of a higher income, was not the only motivation for migrating to Europe. Not all of those surveyed were poor in Africa or had low education levels.

Almost two-thirds had three or more reasons for trying to leave Africa, including educational opportunities in Europe, family reasons and governance/security at home.

UNDP said the report was produced to close gaps in the global evidence base and paint a clearer picture of why irregular migrants move from Africa to Europe.

The findings are especially salient as policymakers struggle to find ways of halting an exodus of skilled workers from Africa and uncontrolled migration to Europe. The UN says the report is a clarion call to continue to expand opportunity and choice at home for would-be migrants.

The study also has a message for African governments who continue to marginalize minorities and those who don't share the same political views as their leaders. Those issues were a major motivation for migrating among those interviewed.

Some 62% percent of respondents said their ethnicity or political views were reasons for feeling unwelcome at home.

More than three-quarters said their country's political system offered no chance for them to influence the government.

As well as earning more in Europe, a higher proportion of the women than men interviewed were sending money home.

On average, working respondents were sending back just under one-third of their European income, representing 85% of their total incomes in Africa and over 90% in real terms.

A drowned infant still hugged by a woman, presumably his refugee mother, has been retrieved from the seabed by Italian divers. A boat carrying 50 people from Tunisia sank off the coast of the Italian island last week. (18.10.2019)

Migration on the rise across world, new study says

Millions more people will move across the globe in the coming decades, as economic inequality and the effects of the climate crisis take their toll. That's the conclusion of a new German study. (03.07.2019)