African leaders refuse to recognize the rebel authority in Libya | World| Breaking news and perspectives from around the globe | DW | 31.08.2011

The list of countries recognizing the rebel National Transitional Council as Libya's legitimate governing body is growing. But African Union leaders have remained loyal to Moammar Gadhafi, and for good reason. 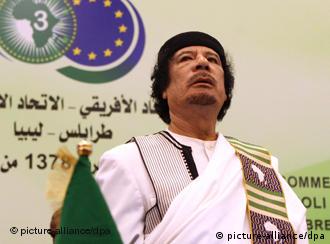 Gadhafi was an important donor to the African Union

All Arabs are Africans at heart - that was one of Colonel Gadhafi's famously wild theories. The man who ruled Libya for 42 years may not have discovered his enthusiasm for Africa until late in the day - but he embraced it wholeheartedly. Gadhafi's fondness for his continent is reciprocated by many African leaders, who remain staunchly loyal to the veteran dictator, even in the dying days of his regime.

The African Union, a federation of 54 African states, has not recognized the rebel National Transitional Council (NTC) as the legitimate body governing the Libyan people, unlike most European states, and even the often hesitant Arab League.

Adams Oloo from the University of Nairobi, explained why the African Union is so reluctant to let go of Gadhafi.

"Gadhafi was a driver of the AU process," Oloo said. "He not only championed the idea of having a United States of Africa, but he was also a chief financier of the African Union. And therefore like many African leaders, the AU always waits until the last minute. Maybe some in the AU think that Gadhafi could still come back, and they don't want to be counted as the anti-Gadhafi forces."

Gadhafi stood shoulder to shoulder with the African Union

It's unclear exactly how much money Gadhafi has invested in the African Union, but his contributions are said to amount to around 20 percent of its annual budget ($260 million for 2011). Libyan state-owned companies also contribute millions to the continent - Gadhafi owns real estate in Zimbabwe, and has stakes in hotel chains in Kenya and South Africa.

The dictator always had money left over to support the fight against colonial powers in Africa, and to supply weapons. Without him, the rebels in Darfur probably wouldn't have been able to continue fighting. Observers believe he may even have helped finance the notorious al-Shabab militia in Somalia. As Adams Oloo pointed out, there are a lot of people relying on him.

"I think AU is headed for crisis to the extent that there is no guarantee that the successor to Moammar Gadhafi will have the same enthusiasm to support the AU financially," Oloo believes. "And the problem surely is that most of the heads of state in Africa pay more lip service to the AU." 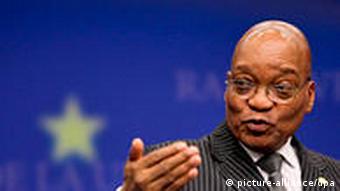 Jacob Zuma has criticized the NATO mission in Libya

The reaction of Ghana's President John Evans Atta Mills shows that the African Union is biding its time.

"Ghana is studying the situation and will take an appropriate decision that is in the best interests of our dear nation," he said last week.

In South Africa, the continent's economic powerhouse, President Jacob Zuma has come under fire for his handling of the Libya conflict. Zuma has refused to recognize the rebel authority, and he has repeatedly condemned NATO's military intervention in Libya, despite supporting a UN Security Council resolution in March, authorizing a no-fly zone to "protect civilians."

When NATO used the mandate to protect the Libyan rebels, South Africa and the African Union tried belatedly - and in vain - to propose a ceasefire plan and reconciliation talks between Gadhafi and his enemies. Neither side seemed interested. The AU is made up of 54 African states

"As South Africa, we definitely will be learning from this experience, where people abused the UN Security Council resolution, which had a very specific mandate," Clayson Monyela, the foreign ministry spokesman told the news agency dpa.

South African opposition parties - and many western powers - were unhappy that the president seemed to be siding with the Libyan strongman. Some say Gadhafi helped finance Zuma's own rise to power.

"South Africa will find itself on wrong side of history with continued support for Gadhafi," Peter Bouckaert, a researcher with Human Rights Watch, said last week.

Zuma's stance on Libya was based in no small part on the support his party received from Gadhafi in the long sturggle against the racist apartheid regime in South Africa.

Having supported the UN Security Council resolution in March, South Africa may yet be able to cobble together diplomatic relations with the new government in Libya. But the role the African Union will play in post-Gadhafi Libya is uncertain. Once the NTC assumes power in Tripoli, the African Union may find itself cut adrift.

Germany says Gadhafi will answer in court for 'gruesome rule'

Foreign Minister Guido Westerwelle has described the apparent change of power in Libya as a victory for the country's people. He said he was confident that the political transition towards democracy would be peaceful. (22.08.2011)

Having taken a decidedly back seat in the military campaign against Libya's Colonel Moammar Gadhafi, the United States is now beginning to talk of its role in the Arab country's future. (23.08.2011)