The Taliban was aware of the departure of four Americans overland, officials have said. The news came as US Secretary of State Antony Blinken arrived in Qatar for emergency talks. 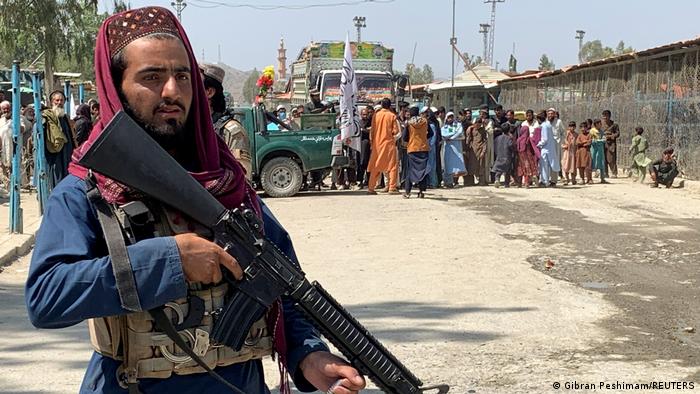 A Taliban fighter stands guard at the border with Pakistan

The United States has evacuated four American citizens from Afghanistan via a land route, an official told reporters accompanying US Secretary of State Antony Blinken on his flight to Qatar.

"This is the first overland evacuation facilitated by the State Department," the official said, but did not clarify which countries the Americans had transited through or arrived in. He added that the Taliban were aware of the move and had not hindered it.

Blinken arrived in Qatar on Monday to hold crisis talks with leaders in Doha on how to handle the Taliban's sweeping takeover in the aftermath of the US withdrawal.

He is the most senior US official to visit the region since the Taliban began claiming large swaths of the country on August 15.

Washington has said it is closely monitoring a promise by the militants not to interfere with the departure of US citizens and allies.

The office of Qatar's ruling emir, Sheikh Tamim bin Hamad Al Thani, said later on Monday that the emir and Blinken had spent the afternoon discussing how to address the dire security situation in Afghanistan.

What's on the agenda for Blinken in Doha?

Ahead of his arrival, Blinken expressed his "deep gratitude" to Qatar for hosting US diplomats who had relocated their offices from Kabul to Doha. Blinken will meet with many of these officials during this trip.

One of the most important topics on Blinken's trip will be the reopening of Kabul's partially destroyed airport, in order to continue evacuations as well as bring in much-needed humanitarian aid supplies.

The German chancellor said negotiations were necessary in order to evacuate Afghans who worked with the German government. Meanwhile, the top Afghan resistance leader said he is "ready to stop fighting" the Taliban.

Taliban forces are trying to retake the last standing province in Afghanistan as General Mark Milley said there's a "good" chance of a civil war.

The head of the National Resistance Front of Afghanistan has said his fighters will not give up the battle for the holdout province of Panjshir. Rumors had spread that the region had fallen to the Taliban.