The comments came as the Taliban captured their first regional capital, dealing a major blow to the Afghan government. The UN and EU have condemned the violence which is causing a humanitarian crisis. 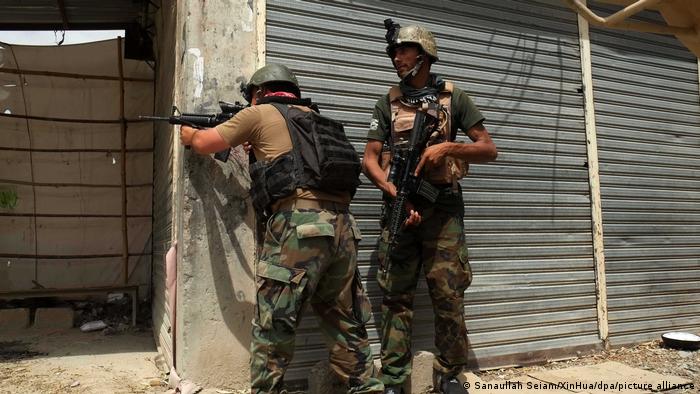 The United Nations' Afghanistan envoy, Deborah Lyons, has called on the Taliban to stop its offensive on major cities immediately.

Lyons was addressing a UN Security Council open meeting on the deteriorating security situation in Afghanistan on Friday via video-link from Kabul.

What did the UN envoy say?

Addressing the 15-member council Lyons said, "the Security Council must issue an unambiguous statement that attacks against cities must stop now."

Lyons went on to say that the war in Afghanistan had now entered a "new, deadlier, and more destructive phase.”

The diplomat questioned whether the Taliban had the interests of civilians at heart saying: "A party that was genuinely committed to a negotiated settlement would not risk so many civilian casualties, because it would understand that the process of reconciliation will be more challenging the more blood is shed."

Senior US diplomat Jeffrey DeLaurentis echoed calls for a halt to the offensive saying a political solution would protect people and preserve infrastructure. "The Taliban must hear from the international community that we will not accept a military takeover of Afghanistan or a return of the Taliban's Islamic Emirate," he said.

Vassily Nebenzia who is Russia's UN Ambassador expressed his concern at the level of deterioration. "With the withdrawal of foreign forces, the outlook looks grim." He added that "the prospects of slipping into full scale and protracted civil war, unfortunately, is a stark reality,"

The European Union has been among those condemning the Taliban's deadly attacks and demanded "an urgent, comprehensive and permanent ceasefire."

Hannah Neumann, a member of the German Green Party and European lawmaker, told DW that the EU needs to play a role in helping Afghan refugees.

She urged the bloc and the international community at large to do more to support the people of Afghanistan now that troops have been withdrawn.

"The Afghan crisis, the refugee crisis is a humanitarian crisis. And we also, as the European Union, need to play our part in making sure that these refugees are well taken care of in the neighboring countries. But I think also in the European Union."

What has led to this point?

The open meeting was requested by the Afghan government as worsening security and humanitarian crises envelop the country. The Taliban have managed to take control of vast parts of the countryside.

On Friday, the militant group captured its first provincial capital, taking control of Zaranj in the southern province of Nimroz.

The Taliban has concentrated attacks on a number of large cities including Kunduz, Herat and Lashkar Gah.

Fighting has surged since US and NATO forces began a phased withdrawal in May. The process is expected to wrap up by the end of this month. The US has been providing air support to government troops.

In response the Taliban said they would now target senior officials.  The government's head of media operationswas ambushed in Kabul on Friday.

Just days earlier Afghanistan's acting defense minister was targeted in an assassination attempt. At least eight people were killed in that attack and a further 20 injured.