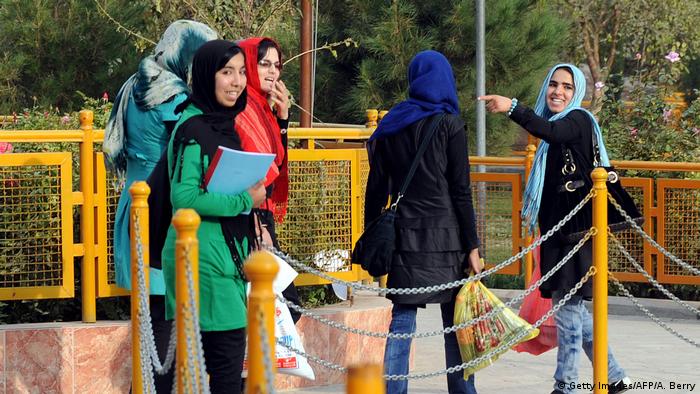 As the Taliban continue to capture major Afghan cities such as Herat and Kandahar, many women in Afghanistan are concerned about their future under Islamist fundamentalist rule should the group take over the country.

Afghan women's rights activist Mariam Atahi told DW on Friday that she is afraid the Taliban "will come and kill me" if the Taliban launch an offensive on Kabul, Afghanistan's capital and largest city.

She said she fears punishment from the Taliban "because for the last 20 years, I advocated for women's rights," going against Taliban "ideologies and thoughts."

"People are stressing out that tomorrow night or the night after tomorrow, the Taliban will take Kabul and they are going to go back to the same situation as they were in 1996," Atahi said.  "Afghan women especially, who have gone through so much during the Taliban regime, are scared about what will happen."

What was life like for Afghan women under Taliban rule?

The Taliban previously ruled Afghanistan from 1996 to 2001, and imposed strict rules on women during that period. Women were unable to work or be in contact with men other then blood relatives, and had to wear a burqa while out in public.

If women violated the rules, they could face severe punishments from the Taliban, such as imprisonment, torture or even death. Women were often publicly flogged or executed during the Taliban's rule of Afghanistan.

Atahi said women under renewed Taliban occupation are witnessing the same types of restrictions, and added that the "situation is not good" in Taliban-controlled areas.

"There is a lot of war, women are not allowed to go to school and … they have been asked to wear the hijab and burqa," she said.

'Taliban 2.0 is exactly the same as the earlier version'

News agency Reuters reported Friday that Taliban insurgents stormed the offices of Azizi Bank in the southern city of Kandahar in early July, and ordered nine women working there to leave.

Atahi collects stories from women in rural areas of the country, and said they share her fears.

She said the women she is helping are afraid that the Taliban will come and "check home by home asking us to be accountable for what we have done during the past 14 years."

Victoria Fontan, a professor of conflict studies at the American University of Kabul, told DW that "morale is really low" among Afghan women.

"They're apprehensive about the future, about their capacity to continue studying, to continue being part of our society," Fontan said. "For them, it's a really difficult time because they fear that Afghanistan is being set back for many years to come, maybe 10, 15 years."

During the Taliban's five-year reign in Afghanistan, girls and women were almost completely prohibited from receiving an education.

A report published by Human Rights Watch in June 2020 found that although the Taliban officially claim it is no longer against education for girls, very few Taliban officials actually allow girls to go to school past puberty.

Human rights group Amnesty International has also previously reported that the vast majority of marriages in Afghanistan were forced during the Taliban era.

International organizations have sounded the alarm about the rollback of women's rights in the country, with UN Secretary-General Antonio Guterres on Friday saying he is "horrified" about restrictions in Taliban-controlled areas.

"It is particularly horrifying and heartbreaking to see reports of the hard won rights of Afghan girls and women being ripped away," Guterres told journalists.

Taliban advances come amid US pullout

The Taliban's advances come after President Joe Biden ordered an end to the US combat mission in Afghanistan, with the remainder of US troops due to pull out by August 31.

The US invaded Afghanistan in 2001 in pursuit of al-Qaida, the jihadist group behind the 9/11 terrorist attacks. The US-backed "Northern Alliance" ousted the Taliban from power during the invasion, with the US and NATO allies then working for two decades to train Afghan government forces to maintain security in the country.

US Senate Minority Leader Mitch McConnell said Friday that it is not too late to keep the Taliban from "overrunning Kabul" and called on the Biden administration to order airstrikes to stop the group from advancing further.