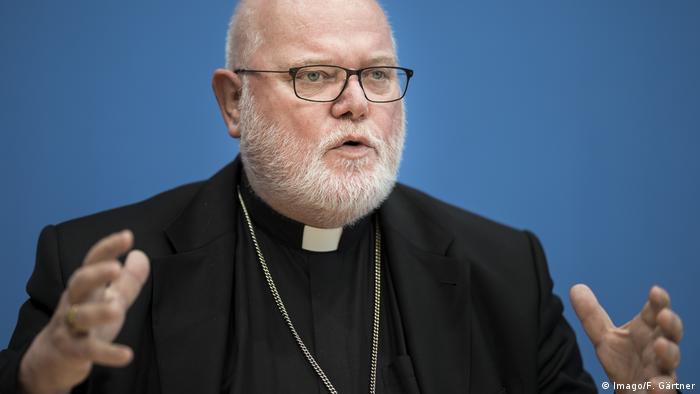 In an open letter published Thursday, Alternative for Germany (AfD) spokesman Stephen Brandner asked whether Munich Cardinal Reinhard Marx had approval from the church community to donate €50,000 ($55,000) to a sea rescue charity.

"I wonder whether my church taxes, which I've been paying at a high level for about 30 years, will be used for this purpose, even though I'm not willing to support traffickers," Brandner wrote.

The donation went to United4Rescue, an alliance backed by the Evangelical Church in Germany (EKD). The group had been seeking donations to fund a ship to rescue migrants in the Mediterranean Sea.

The AfD politician asked why Marx, Germany's top cardinal, had decided to draw on the archdiocese's funds, and demanded to know whether any of the contribution had come out of his own pocket. Brandner also argued in his letter that rescue boats in the Mediterranean were driving "more and more people to take the life-threatening route across the sea to Europe."

Another AfD MP Johannes Huber wrote on Twitter: "Marx misappropriates €50,000 from church tax money. In doing so, he is supporting the business of traffickers."

In Germany, church members have to pay Kirchensteuer (church tax), which typically amounts to a little under one-tenth of somebody's income tax.

Read more: AfD leader: We are Christian, but churches are too political

According to the archbishopric, the money came from a special part of the Munich archdiocese's budget which is made available each year for the cardinal to donate to charitable and urgent causes as they see fit. Such tranches of funds are common in Catholic dioceses in Germany, with the money designed to be easier to deploy at speed with minimal consultation as the cardinal sees fit.

EKD council chairman, Bishop Heinrich Bedford-Strohm, thanked Marx for his donation, and told the Augsburger Allgemeine newspaper that he had received death threats as a result of his support for migrant sea rescues.

Marx was also targeted with criticism in 2018 and 2019 after making two donations of €50,000 to other sea rescue missions.

Plans to include laypersons in a reform process have sparked anger in the Vatican. The Catholic Church in Germany is now on a head-on collision course with Rome. (13.09.2019)

Opinion: A mosque tax is fair, correct and necessary

If the interior minister wants "Islam in Germany," then it's right to consider a mosque tax, in line with Germany's church tax. But it's just one battle over the future status of that Islam, says Christoph Strack. (27.12.2018)

The idea, similar to Germany's church tax, would aim to make mosques independent of foreign donors. Germany's government and progressive Muslim leaders have supported the idea. (26.12.2018)