The stunt was a protest against the European Central Bank's climate policy. On Tuesday, a think tank report argued that the ECB's lending rules favored polluters. 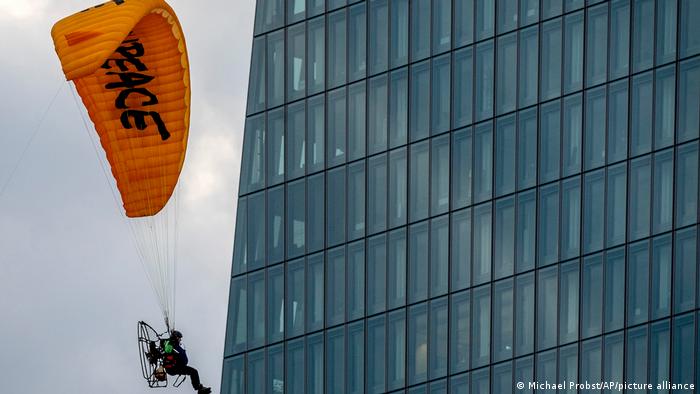 A Greenpeace activist flies with a motorized paraglider past the ECB in Frankfurt, Germany, to protest against the bank's climate policy

After flying over the Main river in the German city, two paragliders landed on the low-rise ECB complex, accusing the bank of funding polluters.

A spokesperson from the bank confirmed the breach and said the police had been informed. He added that the ECB was conducting a review of its strategy and this process included a thorough analysis of its climate crisis practices. 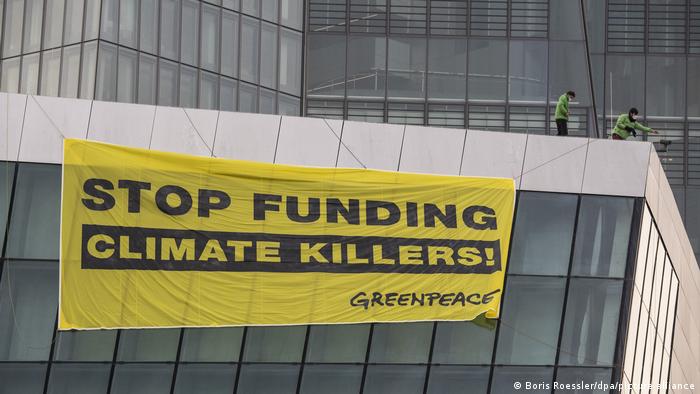 Why was the ECB targeted?

The ECB has long been criticized for not considering long term climate risk when it buys bonds and gives credit.

Greenpeace says the ECB backs assets worth some €300 billion ($356 billion) that benefit more than 60 carbon-heavy companies, including Shell, Total, Eni, OMV and Repsol.

Greenpeace: 'Carbon bias is rife at the ECB'

"Instead of favoring fossil fuels, the ECB must at once exclude these toxic assets and change the rules to tackle the climate emergency we live in. A green and just transition to a resilient carbon-free world must be front and center for the ECB."

With €1.8 trillion in outstanding loans to banks, the ECB has become the single biggest source of funding for the euro zone economy and its plan to keep increasing its balance sheet indicates a significant role for many years to come.

Made in Germany - Water: A scarce resource

Climate change "makes the world more unsafe," according to the head of the military alliance NATO. Stoltenberg is hosting US climate envoy John Kerry for talks.

Firebrand President Rodrigo Duterte has cooled off his rhetoric targeting the European Union and a new cooperation agreement is on the table. However, Duterte's authoritarian tendencies loom in the background.

The euro prepares for a digital makeover

Can paper money keep up in a world marked by a pandemic, extreme weather and rapid digitalization? The ECB has announced plans to develop an electronic form of Europe's most used currency.

An organic farmer claims emissions from Volkswagen contributed to climate change and are responsible for damaging his farm. A German court has already expressed doubts as to the case's viability.