The right-wing Alternative for Germany (AfD) has bagged third place in municipal elections in the central state of Hesse, and the populist party is polling strongly a week ahead of three key state elections. 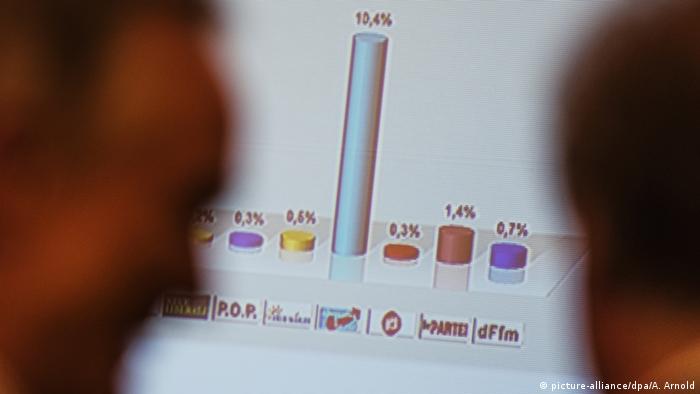 Preliminary results, which won't be confirmed until Thursday, gave the Alternative for Germany (AfD) 13.2 percent of the vote in Hesse's ballot, just beating the Greens (11.6 percent) for the third position. In some municipalities, the euroskeptic and anti-migration party led by 40-year-old Frauke Petry claimed more than 20-percent voter support, according to the provisional results. In Frankfurt, Hesse's largest city, the party won just over 10 percent.

Chancellor Angela Merkel's Christian Democrats narrowly claimed the most votes, at 28.2 percent, just ahead of the Social Democrats on 28 percent.

State Finance Minister Thomas Schäfer, a Christian Democrat, said he expected AfD's final results to be slightly lower than initially predicted. He also ruled out any coalition between the CDU and AfD. 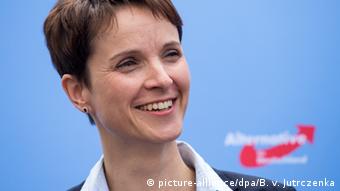 Hesse's election serves as a warm-up for three more important votes for state parliament positions in Baden-Württemberg, Rhineland-Palatinate and Saxony-Anhalt on Sunday, March 13. For several months now, the AfD has looked on course to break into all three legislatures, with latest evidence only supporting this theory.

A poll for broadcaster ARD showed support for the AfD in Saxony-Anhalt at 19 percent, a result that would make it the third strongest party there after Merkel's Christian Democrats and the communist-rooted Linke party. In Baden Württemberg, AfD polled at 13 percent, with 9 percent projected support in Rhineland-Palatinate.

Under German electoral law, winning 5 percent or more of the popular vote guarantees parliamentary representation - the same target Petry has set for the party nationwide in 2017's general elections.

The party's strong anti-immigration stance has congealed since Petry successfully ousted party founder and economist Bernd Lücke, a committed euroskeptic who was rather more moderate in other regards.

"First of all we need to work towards controlling the borders and deporting a lot of people who are in Germany without having the right to be here," Petry told Reuters from the campaign trail in an interview in Bitterfeld-Wolfen, an industrial town in the eastern state of Saxony-Anhalt.

These sentiments play well with some Germans who fear they are being inundated by foreigners after 1.1 million people applied for asylum last year.

Deputy Premier Martin Dulig suspects that police officers are sympathetic to organizations like Pegida. Some politicians have voiced their support with this criticism, while others are outraged and disappointed. (03.03.2016)

Leaders of the right-leaning AfD Party are under attack over their remarks arguing it was okay to shoot illegal migrants at German borders. A party deputy now explained the use of firearms against children was not okay. (01.02.2016)